DNA test limits: Current direct-to-consumer tests provide only a glimpse into our ancestry

In 1823, fur trappers at Badger Bay, Newfoundland had the last recorded contact with the Beothuk tribe. They found three women hunting for mussels and near starvation. The trappers brought them back to civilization for medical treatment, but two died. The survivor, Shanawdithit said there were only 15 other members of her tribe left. Six years later she died from tuberculosis.

But last month a woman in North Carolina, Carol Reynolds Boyce, claimed to be the only known descendent of the Beothuk. Her evidence was her mother’s Newfoundland birth, a story of a distant Native American relative and DNA test results from Toronto-based Accu-Metrics. Her brother and mother also received the Beothuk result. She was, she claimed, a member of the long lost tribe.

But within days, geneticists were refuting her claims in the media. The result was impossible because there was too little Beothuk DNA available to test against. The only known samples were taken from two skeletons of long-deceased Beothuk women. From CBC:

[Memorial University geneticist Steven] Carr said he and his colleagues have done some analysis of DNA obtained from the skulls of Nonosabasut and Demasduit, the only Beothuk DNA he is aware of existing anywhere in the world. But he said there was not enough DNA to provide a comparative sample” To say to someone, ‘Yes, you’re a Beothuk’ — that just can’t be done.”

Within days an Accu-Metrics spokesman said the Beothuk variants identified in the study where removed from the company’s database. Now no results about Beothuk heritage are reported.

A similar issue came up during Elizabeth Warren’s senate campaign in 2012. Like many Americans, Warren had been told she has some Native American ancestry growing up and was told she was a member of the Cherokee tribe. Warren’s opponent suggested she present evidence of her heritage. But, as the Washington Post wrote at the time, there would be no way to find definitive evidence:

That’s because determinations of ancestry are based on “ancestry-informative markers” — genetic flags that offer probabilities of the likelihood of certain ancestries. Most of those markers, AIMs, are “based on global populations that are outside of the U.S.,” she said, “primarily people of European descent, people of Asian descent and people of African descent. Those three populations are not enough to determine how much Native American ancestry a person has.” There are some companies that are obtaining DNA from Native Americans to fill that gap — but that’s almost certainly not enough information to make that identification.

The formalization of tribal membership by bloodline arose in the 1800s as American settlers claimed Native American lands and forced the surviving indigenous populations into relocation. Native peoples have struggled within and between their own tribes for ways to sanction membership. The ‘blood quantum’ has long been used. This is the measure of how indigenous a person is based on the ethnicity of their ancestors. From the New York Times:

Modern Native Americans — who in 2017 are still issued cards by the federal government certifying their “Degree of Indian Blood” — are used to, if not necessarily comfortable with, the need to “prove” their identities in ways that may seem strange to people of other ethnicities. Tribes set their own membership requirements, but in order to be recognized by the federal government, they must also prove their historical continuity and have generally hewed to the methods it has established.

Direct-to-consumer ancestry testing, such as offered by 223andMe, has become a big business, and many people take the data provided by the Y chromosomal line or the female mitochondrial line–two lineages of the many thousands found in an individual–as definitive. 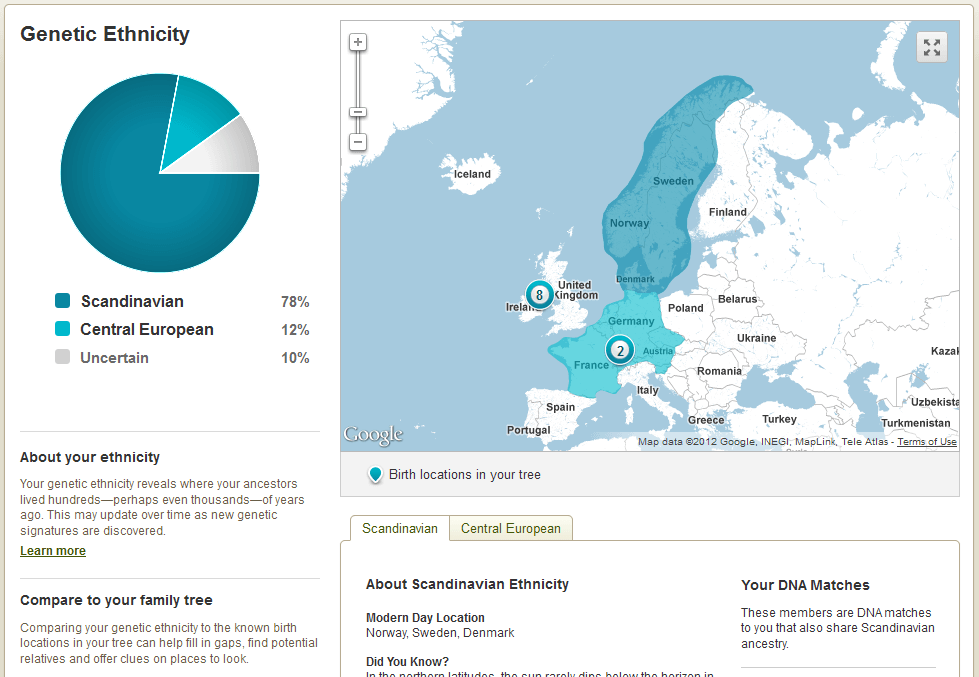 But results are not always as robust, or as specific, as promised. A cadre of men in the modern white supremacist movement the Alt-Right, have used testing to “prove their whiteness.” And some African American users have sought out the tests to help identify where in Africa their enslaved ancestors came from, which the data cannot show

Ancestry DNA is also proving both how widespread and largely false the myth of the Native American great-grandmother is among North American caucasians according to Kim TallBear a professor of Native Studies at the University of Alberta:

There is this national sort of story, and this I do see becoming more prominent in certain parts of Canada too, that you have people with no lived experience in indigenous community, they can’t even name any indigenous family or ancestors, but they have a family myth about a Cherokee great-grandmother, or they’re descended from Pocahontas, you get that a lot on Virginia. So I think it’s another kind of claim to own indigeneity, to try to have a moral claim or sense of belonging on the North American continent and so that’s the context in which these tests are so popular.

TallBear’s claims of cultural appropriation may be as difficult to prove as Beothuk ancestory. But it is a fact that people are using DNA to investigate claims made by their relatives about where they came from and when. And maybe someday when thousands of people of different ethnic origins have been sequenced, DNA might offer a more robust answer.