Meredith Knight | October 20, 2016
This article or excerpt is included in the GLP’s daily curated selection of ideologically diverse news, opinion and analysis of biotechnology innovation.

With three weeks left until the election, it is already safe to call the 2016 election one of the craziest in US history. From Donald Trump’s shocking win of the GOP nomination to the success of third party candidate Gary Johnson, this election cycle has been one surprise after another. But possibly nothing has been more unpredictable than the rise of the ultra right-wing group the ‘alt-right.’ The group has gone from hiding in internet chatrooms to bursting into mainstream America –all on the back of Trump’s campaign.

If you’re unfamiliar with the ‘alt-right,’ US News and World Report describes it like this:

The alt-right is built around the belief that evolutionary biology shows that white people and black people are biologically and genetically different, and that this evolved over time…The second (and perhaps equally important) concept at the heart of the alt-right movement is the belief that America was, is and should be a nation for white people. It isn’t just “nationalist,” the fuzzy term that most political reporters use to describe Trump and his alt-right legion, or what Clinton was referring to when she undiplomatically described Trump’s “basket of deplorables.” It’s that white people must put America first – for white people. 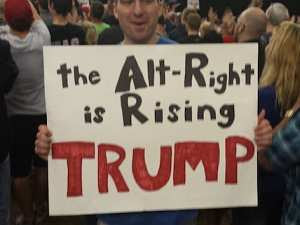 As you might imagine, if you traffic in alt-right circles, proving your ‘whiteness’ is essential. So it shouldn’t be surprising that members of the movement are using genetic testing to “prove their whiteness” to win bragging rights within the movement and establish their place in the American white elite.

But as alt-righters eagerly await their genetic results, 23andMe says they are interpreting them wrong. The company’s ancestry testing gives a percentage of regional origin based on large swathes of each person’s genome, like sub-Saharan African, South American or European. But those ancestral roots don’t correspond directly to race.

In fact, 23andMe says they do not report any race-related information. In questionnaires that accompany the genetic tests, users can volunteer their race. 23andMe has used that self-identification information combined with ancestry results for some interesting research. From Elspeth Reeve who broke the story on VICE:

“As much as 10 percent of European-Americans from the South carry small levels of African ancestry, a few percent,” [23andMe population geneticist Kasia] Bryc said, based on the company’s study of 160,000 customers. Those with less than 28 percent African ancestry were more likely to identify as white, and those with more were more likely to identify as black.

Race and ancestry genetics have a long and sordid history. It’s still complicated. Social scientists and geneticists agree that this issue is not black or white. Again from VICE:

Terence Keel, an assistant professor of history and black studies at the University of California–Santa Barbara, studies the relationship between culture and race within science. He says these present-day white nationalists are reproducing very old ideas about race, perhaps due to anxiety about their place in the social order in an era of the first black president. “Geneticists, after looking at the human genome, realized something we’ve thought for a while, which is there’s not a direct correlation between the external things we see — height, skin color — and the genes,” Keel said. “Once we sequenced the genome, we also discovered humans are about 99.98 percent the same.” Only about 10 percent of genetic variation is between what we traditionally think of as races.

Alt-righters also prove they understand the self-identification component to race when they argue if Finnish, Jewish or Spanish people are “white.” They see ‘whiteness’ as a fluid concept as they debate whether these groups are in or out. Some alt-righters are naturally disappointed in their results. As VICE reported one chatroom participant consoled a peer by suggesting his non-European ancestry was the result of rape, from VICE:

“Oy vey. My ancestry dna results are back,” Eagles wrote, linking to a chart showing 7 percent African ancestry and 22 percent Native American. Someone reassured him, suggesting he hadn’t come by the genes by choice: “There is no way that anyone’s lineage avoided rape. While there is no way to prove that, I am positive it’s true.” Another said he was “deffo mostly White.”

In a 2013 episode of The Trisha Show, genetic testing revealed that white supremacist Craig Cobb was ‘only 86 percent white’:

Related article:  Did whales gain the ability to live in the water by shedding genes?

At the end of the segment, Cobb brushes away the results, claiming they are ‘statistical noise’ and ‘short science.’ His reaction is in stark contrast to what some black Americans are using genetic testing to discover their origins Ethan Chiel writes at Fusion. Some African Americans have used genetic testing to explore their ethnic origins, parts of which are often unknown because they were lost due to enslavement of their ancestors and the sexual violence they experienced:

It’s the inverse of what young black Americans are doing with the genetic tests, which my colleague Cara DeFabio wrote about a couple of weeks ago. Testers of African descent are using Ancestry.com and 23andMe to try and learn about their family via genetics because there often aren’t records of where their more distant ancestors were from before America. For them, evidence of European ancestry that dates to the 1700s and 1800s can be traumatic, the proof in their DNA that their enslaved ancestors were likely raped by the people who bought and sold them.

Other alt-righters have created a conspiracy theory suggesting that 23andMe falsifies ‘aryan peoples’ results to include DNA from other ancestral lines to coerce people into supporting diversity. From Elspeth Reeve at VICE:

When I asked [23andMe populiation geneticst] Bryc about this conspiracy theory, she was shocked. “We have an algorithm. It’s a very robust machine learning algorithm, and what the results are, are the results that you get.” Andy Kill, who works in media relations for 23andMe, stepped in: “We can unequivocally deny that. 100 percent.”

Genetics does have an actual race problem, however, in that the majority of testing for research has been done with people with European ancestry. 23andMe was just awarded a $1.7 million grant to develop a panel of genetic tests for people of primarily non-European descent to address disparity.

Meredith Knight is a frequent contributor to the Genetic Literacy Project. She is a freelance science and health writer based in Austin, Texas. Follow her @Meremereknight