Genetic biotechnology is usually discussed in the context of current and emerging applications here on Earth, and rightly so, since we still live exclusively in our planetary cradle. But as humanity looks outward, we ponder what kind of life we ought to take with us to support outposts and eventually colonies off the Earth.

While the International Space Station (ISS) and the various spacecraft that ferry astronauts on short bouts through space depend on consumables brought up from Earth to maintain life support, this approach will not be practical for extensive lunar missions, much less long term occupation of more distant sites. If we’re to build permanent bases, and eventually colonies, on the Moon, Mars, asteroids, moons of outer planets or in free space, we’ll need recycling life support systems. This means air, water, and food replenished through microorganisms and plants, and it’s not a new idea.

Space exploration enthusiasts have been talking about it for decades, and it’s the most obvious application of microorganisms and plants transplanted from Earth. What is new, however, is the prospect of a comprehensive use of synthetic biology for a wide range of off-Earth outpost and colonization applications.

To this end, considering human outposts on the Moon and Mars, a study from scientists based at NASA Ames Research Center and the University of California at Berkeley examined the potential of genetic technology, not only to achieve biologically based life support systems, but also to facilitate other activities that must be sustained on colony worlds. Not discussed as often with biotechnology and space exploration in the same conversation, these other activities include creation of rocket propellant, synthesis of polymers, and production of pharmaceuticals. Together with the life support system, they paint a picture of the beckoning era of space activity that puts synthetic biology at center stage.

Although written specifically in the context of lunar and Martian outposts, the proposed biologically based technical infrastructure is just as applicable to a colony on less frequently discussed worlds, such as the dwarf planet Ceres or an outer planet moon, or to a colony that orbits in the Earth moon system.

As we’ll discuss a little later in connection with rocket fuel, the chemical elements needed — oxygen and nitrogen — are available in and in the vicinity of the places we might put outposts. It’s just that the atoms of these elements are not in a breathable form. Rather they’re combined with atoms of other chemical elements. On Mars, for instance, there’s plenty of oxygen, but not a drop is useful either to mix with propellant in rocket engines, or for humans to breath. That’s because Martian oxygen atoms are bound with carbon atoms in molecules of carbon dioxide (CO2). For humans, CO2 is a waste product; instead, we need to breathe molecular oxygen (O2) to support life functions. But, in the presence of light, photosynthetic organisms, such as plants, algae, and certain bacteria take in CO2 and water (H2O) in and release O2. In the process, they make food. 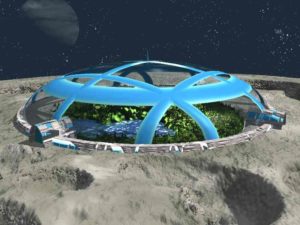 The moon also has oxygen, but in the form of silicon dioxide (SiO2) in rocks, and both the moon and Mars have sources of water. While there are chemical and electrical methods that can split up and rearrange atoms of some of these compounds without the help of living things, the gist of the NASA/Berkeley conclusion was that using life forms, especially certain microorganisms, the amount of energy and effort needed to produce a given amount of oxygen can be reduced substantially. The same is true for the production of rocket propellant and for nitrogen, which is needed both for human breathing (as N2 gas to dilute O2), to support plants (with the help of bacteria), and for certain types of rocket fuel.

Emphasizing the utility of microorganisms, the study also noted that genetic methods can increase the yields of the needed chemicals. One important example involves a type of microorganism known as cyanobacteria. Descendants of ancient bacteria that are thought to have been the first major suppliers of oxygen gas to Earth’s oceans and atmosphere, cyanobacteria are photosynthetic. Like plants, they consume CO2 and water, releasing O2. The genomes – the collection of genes – of various strains of cyanobacteria are small and their sequences are well known, making the capabilities of these organisms easy to manipulate with genetic engineering. In addition to already being able to use nitrogen directly, they can be enhanced with genes from other microbes with novel energy systems, including those with the capability of generating methane and hydrogen (both useful as rocket fuel).

The NASA/Berkeley study included an economic analysis showing the power of synthetic biology to produce food mass. Nature’s most famous method for this, photosynthesis, is extremely efficient; thus, colonies on the Moon, Mars, other bodies, or free space colonies will emphasis plant farming, and probably algae-based nutrition as well. You’re unlikely to see big farm animals, such as cows or pigs. They take up far too much land. But, due to their high protein to mass ration, its been suggested that space colonists might learn to farm and enjoy insects such as grasshoppers. Furthermore, possibly timed appropriately for space colonization, the technology for synthetic meat beckons. Since, colonists will largely on their own, the NASA/Berkeley report also discussed using synthetic biology for pharmaceutical production.

Adapting life to its new home 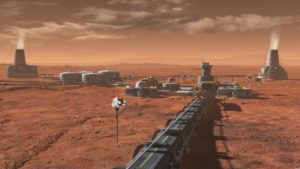 Certain regions of Earth feature environments similar to those on planets and moons that humans might colonize. Especially with a division of Earth life known as the Archaea domain, there are various microorganisms that can survive in extreme cold, high salinity (thought to characterized sources of underground Martian water, or ancient water on Mars), and certain Archaea are also methane produces. Thus, while not mentioned specifically in the recent report, researchers looking at applying biological methods to space exploration are also looking into the prospect of modifying certain bacteria, such as cyanobacteria with Archaea genes.

All that mentioned above is but the tip of the iceberg. On Earth, there are organisms that resist radiation, heat, cold, and drying, even to the point of being able to live in the space vacuum. Considering potential space colonization environments compared with our homeworld in terms of gravity, radiation, and various other parameters, there are a lot of traits we might eventually genetically engineer into life forms that we bring to help them survive while they perform their task, whether circulating life support gasses, producing rocket fuel, eating up rock, or even terraforming –changing the colony’s entire environment to make it like Earth.