Plight of the monarch: Threatened by more than the loss of milkweed food supply

If GMO critics are to be believed, there is one thing — and one thing only — threatening the existence of the monarch butterfly: glyphosate.

The popular herbicide is used by farmers to control weeds, resulting in the dramatic loss of milkweed, the sole source of food for monarch caterpillars, according to a 2015 reportt from the Center for Food Safety.

On the surface, this makes sense—if the caterpillars can’t eat, they die. But center and other critics say there is more at play than just the use of glyphosate. They also blame genetically modified glyphosate-resistant corn and other crops, which can be treated with glyphosate but still thrive in a farmer’s field.

“This report is a wake-up call. This iconic species is on the verge of extinction because of Monsanto’s Roundup Ready crop system,” said Andrew Kimbrell, the center’s executive director, in Russia Today.

But monarch populations have whipsawed over the years, and the reasons for these declines and clawbacks in population growth are more complicated than this GMO-glyphosate-milkweed-caterpillar connection.

A look at monarch population in 2015-16 illustrates the variety of hazards faced by the popular insect.

The year-long monarch migration cycle spans generations of butterflies, covering most of the North American continent (including Mexico, depending on how one draws the border). In the winter, the butterflies return home from their northern migrations, spending the season high in the mountains of central Mexico. In the spring they begin the long journey north. The butterflies that leave Mexico make it to Texas or Oklahoma, where a new generation is born. The process continues as the butterflies make their way north into Canada, where a final generation is born. Once summer ends, this generation makes a marathon journey back south to Mexico.

Lots of things happen along the way.

In the 2015-16 winter, the monarch population showed a significant increase, according to tagging data from University of Kansas and citizen science data submitted by butterfly watchers nationwide. This boded well for the spring and summer migration cycles. However, a series of bitter ice storms in Mexico in March 2016 killed off millions of monarchs — up to 40 percent of the entire population — that hadn’t begun the spring migration. Other weather events made huge dents in the migrating butterflies. Scientists won’t know the full impact until the census of returning over-winter butterflies is taken, but it doesn’t look like they had a good start. 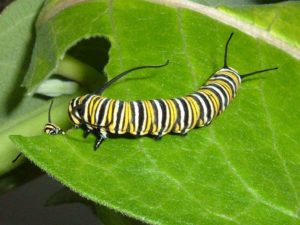 By early summer, it looked like monarch populations had declined, according to data being collected by Orley Taylor, a professor of ecology and evolutionary biology at the University Kansas and director and founder of MonarchWatch, a site that presents data on monarch populations. In July he predicted a decline in springtime and early summer populations making their way north of Mexico, partly due to adverse weather in Mexico and partly due to conditions on the way north.

The butterflies also were hampered by the effects of multi-year droughts that have plagued the US Midwest and West. If there’s no water, then the butterflies will die. In 2013 in Texas, butterfly populations were slashed by drought and accompanying wildfires, which killed off both milkweed and nectar-producing plants. As the climate changes through North and Central America, more drought and extreme storm events become probable, increasing the hazards facing the black-and-yellow travelers.

Predators also represent a perennial problem, as explained by this page from the University of Minnesota. These include ants, wasps, and sometimes, other newly hatched monarch caterpillars (they sometimes eat neighboring unhatched eggs). Birds and wasps feed on adult butterflies as well as caterpillars. Monarch caterpillars do contain a toxin, a cardiac glycoside, they accumulate from feeding on milkweed, but this toxin is largely degraded in a fully mature butterfly. Diseases and parasites also take their toll on the butterflies, at every stage of life.

And finally there is glyphosate and milkweed. Scientists, including those at Monsanto, and anti-GMO activists have pointed to the shortage of milkweed as a factor in monarch declines. There has been a loss of habitat along the migratory route tied to farming practices that use glyphosate for weed control. Eric Sachs, scientist at Monsanto, said glyphosate did play a role in reducing milkweed populations, which allowed conservation tillage of land, a weed control practice that increased 50 percent since Roundup’s introduction. In addition, changes in the US Renewable Fuel Standard that required more corn-based ethanol drove up production and prices of corn. This came at the expense of milkweed habitat, as farmers began planting to the edges of their fields. But, as Sachs said, “if they didn’t use Roundup, they’d have used something else.”

The monarch population has been decreasing for at least the past 20 years. It can be a challenge to determine trends from year to year, as the vagaries of wind, temperatures, and rain can affect the migration. And the reality is that 99 percent of monarchs die before adulthood — so we’re depending on the 1 percent to survive everything that’s coming at them. The availability of milkweed during the northward migration is an important factor (and nectar-rich plants are needed for the southbound journey).

“There is the need to educate the American public concerning the coming droughts, the overall impacts of climate change and even the basic fact that CO2 drives the planetary bus. Monarchs give us an opportunity to deliver these messages because people can relate to them in a way that they can’t relate to pollinators, plants, ground nesting birds, small mammals and all the things that feed on them.”

The US Fish and Wildlife Service is reluctantly considering adding the monarch to the US Endangered Species List. At the same time, Monsanto and other organizations are devoting time and money to encourage the planting of milkweed and development of other plants to increase monarch-friendly habitats. Those steps alone won’t solve the many problems facing the monarch.