Are our views on religion, astrology and new-age beliefs hardwired?

The fault, dear Brutus, is not in our stars, but in ourselves….

So says Cassius in the Shakespearean play Julius Caesar. Writing in an age when even Galileo, despite knowing that the Earth was just a planet, believed in astrology, Shakespeare was exposing astrology as the superstitious nonsense that we know it to be today. The planets and stars do not control us. Instead, Cassius insists, “Men at some time are masters of their fate.”

Most people in our modern society would agree with Shakespeare in practice, but large numbers of people also still believe in astrology, along with other pseudosciences, at least when they’re not at a job interview. They’re not fated to think this way based on the relative positions of the Earth, planets, and stars at the time of their birth, but might the thought patterns underlying such beliefs be “fated” in a genetic sense? Overall, as with many aspects of human behavior, the answer is starting to emerge as a complex interaction between genes and multiple other factors.

Evidence for a genetic basis of belief

Several studies conducted in recent years have posed questions on matters of religion to identical twins raised apart, making great efforts to eliminate the influence of culture. One study, for instance, quantified religiosity based on three components: “self-forgetfulness”, “transpersonal identification” and “mysticism.” Values for these components, in turn, were calculated based on responses to questions using terms such as “spiritual order,” “power that cannot be completely explained” and other expressions that are not linked specifically to any religion or culture.

The results showed genetic factors accounting for 40-50 percent of religious belief, as defined by the questions that were asked. Thus, the authors concluded that spirituality and faith are 40-50 percent inherited, meaning if all environmental factors are equal, twins have a 40-50 percent chance of having the same religious beliefs. It sounds impressive, but it’s really not, since it also implies a 50-60 percent chance that twins growing up in the same household will end up very different in terms of religion. One might stick to the beliefs of the particular organized religion of the family while the other grows up as an atheist. 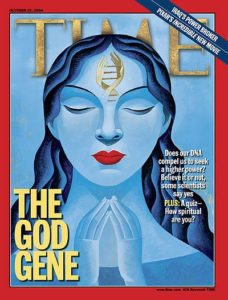 Attempting to hone in on how a genetic basis for religious belief might actually work, another study looked at a handful of genes affecting how certain parts of the brain react to the chemical dopamine. In turns out that patterns in these genes relate to how susceptible one is to confirmation bias – the tendency to interpret new information (or to remember information) in a way that confirms one’s beliefs. Not only is confirmation bias strong in religious believers and those who believe in astrology, psychics, and other pseudosciences, but it’s also been shown to be largely independent of one’s educational level.

Despite the findings discussed above, other studies — some very recent — show that genes are fighting an uphill battle against the environment when it comes to religious belief. As recently as 2013, a twin study looking at religion in secular societies found strong correlations for religion between twins, but this was true for both identical and fraternal twins. This means that the shared family environment was key, not the shared genes, although the genetic factor proved more important for “personal religiousness” (belief in deities and finding comfort in religion) compared with attendance of religious ceremonies. In the same year, another study found that religion depends on multiple factors, including personality traits, which themselves result from complex nature-nurture interactions. Finally, a study published in 2014 demonstrated effects of various genetic factors on religion to be only moderate.

Polling data from the National Science Foundation actually show that the number of Americans believing in astrology has risen significantly over the last ten years. The trend is dominated by 18-24 year-old age group, where the increase in astrology belief is alarmingly high. This is despite the Millennial Generation (those born from the early 1980s to early 2000s) having much lower rates of religious affiliation and belief compared with older Americans. For astrology, significant increases also were found all the way into the younger end of the Baby Boom Generation (born mid 1940s-early 1960s). Between the Millennial and Boomer generations is Generation X, whose members, like Millennials, also cling much less to traditional religion compared with older generations. Clearly, the basis of such dramatic changes in belief must be environmental (cultural and society) rather than genetic, and it could be that astrology and other “new age” beliefs are rapidly replacing traditional religious ideas.

Thus, while susceptibility to bias and “spiritual” thinking (for lack of a better term) seems to be influenced to some extent by biology, the form that it takes might now be transitioning, due to cultural, nurturing factors. Whether it’s a fault, or something not so bad, is something that we can debate in another setting. As for whether it is in ourselves, here we can say that Shakespeare was partly correct. It is partly in ourselves, and partly in our environment.