Could a Planet of the (Talking) Apes ever really evolve?

Ricki Lewis | August 21, 2017
This article or excerpt is included in the GLP’s daily curated selection of ideologically diverse news, opinion and analysis of biotechnology innovation.

I’ve been a huge fan of the Planet of the Apes films from the first, in 1968, which was based on a 1963 novel by Pierre Boulle. But I’ve been frustrated when film reviewers praise the cops-and-robbers action, while glossing over the clever genetic changes behind the alternate evolutionary pathway that led to the dominance of talking apes.

Rise of the Planet of the Apes — the genes

Young geneticist Will Rodman, working at Gen-Sys Laboratories in San Francisco, retools a retrovirus to deliver genes to treat Alzheimer’s disease, a variation on the gene therapy theme that my book The Forever Fix is about. Will’s dad has the condition.

If a special delivery of intelligence genes can counteract an Alzheimer’s brain, would it enhance a healthy brain?

Ferrying in normal versions of the trio of genes that cause early-onset familial Alzheimer’s disease seems too obvious, and the APOE e4 gene variant just increases risk, unlikely enough to seed an army of intelligent apes. But I think the possibilities go much farther.

“Probably at least 1,000 of our 20,325 or so genes affect the brain, and their variants can therefore impact intelligence,” I write in my human genetics textbook. An even more tailored source of intelligence genes: sequencing the genomes of geniuses.

Of course the dominant apes required more than just smarts. Variants of the FOXP2 gene, first identified in an English family unable to speak (see The Family That Couldn’t Say Hippopotamus) in 2001, could, with a single genetic stroke, enable an ape to speak (perhaps). Knocking out the gene in mice affects their courtship song.

Judging from the violence in this last film, I suspect the GM apes also had (or will have) at least one gene variant promoting testosterone production, such as the androgen receptor gene or its modifiers. Few female apes are depicted, continuing the channeling of westerns, cops-and-robbers, and cowboys-and-Indians. Dr. Zira from the first film seems pretty mellow.

A precedent for subverting an Alzheimer’s treatment into superior intelligence is the 1999 film Deep Blue Sea. An intrepid scientist aboard the undersea lab Aquatica, played by Samuel L. Jackson, gets his head ripped off mid-monolog by a smart shark that has partaken of the DNA cocktail meant to treat Alzheimer’s. Said Samuel L. just before the event, “Nature can be lethal, but it doesn’t hold a candle to man.” So true.

Anyway, back at Gen-Sys Labs in the not-so-distant future envisioned in 2011 comes the tinkered virus ALZ-112. It worked in apes and one Alzheimer’s patient (inexplicably turning their eyes a shimmery green) altering genes and entering the germline, which is how it passed to chimp Caesar from his mom Bright Eyes (what Dr. Zira calls Taylor in the original film). Green eye color came to serve as a marker for the infused intelligence, perhaps inspired by the jellyfish’s green fluorescent protein. Since the film was made in 2011 and CRISPR-Cas9 gene editing hadn’t yet been invented, Rodman must have discovered a way to deliver many genes at once using old-fashioned gene therapy. Perhaps a gene gun.

The effects of ALZ-112 wane, and so Rodman invents the new-and-improved aerosolized ALZ-113. It’s possible. Some retroviruses can infect non-dividing cells like brain neurons, and some can be aerosolized.

A bit of plot detail is necessary to trace the origins of the pandemic.

Young scientist Rodman raises Caesar, while treating his dad with the new drug. Caesar gets in a tiff with neighbor Doug Hunsiker when he makes fun of the dad, and the chimp breaks the man’s skin. In the final scene, the neighbor goes to work, and we see blood drip from his nose as the credits roll – and the camera backs off revealing that Hunsiker is … a pilot! A mesmerizing graphic then depicts the speed at which ALZ-113 saturates humanity, killing most of us.

Meanwhile, back in the lab, Caesar squirrels away virus vats and treats his fellow captives, making them smarter, and treats zoo animals too. The stage is set for …

Dawn of the Planet of the Apes

A decade has passed. The escaped viral vectors, ALZ-112 and ALZ-113, have caused widespread Simian Flu, although influenza viruses are not retroviruses. Most people die, presumably due to an insufficient immune response. Transmission is both vertical and horizontal, spread from a sneeze, an ejaculation, or a straight shot through the genome.

We’re doomed. But of course a few of us survive, thanks to genetic diversity. That’s why we have 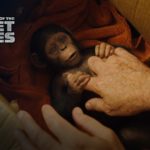 The small, struggling, scattered populations of humanity echo the ways of the australopithecines in Africa millions of years ago. The charismatic Caesar leads, although he must confront an enraged former zoo bonobo, Koba, whose depiction counters the well-known placidity of the subspecies, genetically slightly closer to us than chimps. Ape culture rises.

War for the Planet of the Apes

The third entry happens a mere two years later. In that short time, the Simian flu retrovirus has mutated, as viruses do. Now it doesn’t kill people, but it robs them of speech and dumbs them down. The original film offers an electrifying moment when Charlton Heston’s lost astronaut Taylor, whose own vocal cords were damaged at the beginning of the film, tries to escape his ape captors, only to be caught in a net. He astonishes everyone when he recovers his voice and shouts: “Take your stinking paws off me you damn dirty ape!” So the ability to speak is central to all Apes films. Again, the science is solid. There’s precedent for different variants of the same gene having opposite effects beyond FOXP2. A clotting factor gene variant could be too active and cause blood clots, or deleted and promote bleeding. Variants of the gene LRP5 can cause too little bone mineral – osteoporosis – or too dense bone mineral – osteopetrosis.

But the timeframe is off, in terms of the limits of anatomy and physiology.

The main bad human, played by Woody Harrelson, stops his yammering mere minutes after he inhales near a virus-soaked ragdoll. How would that work? Would the viral vectors bearing the mutant ALZ-113 instantaneously preferentially infect the cells of his larynx? He’s mouthing words so the viruses obviously didn’t cross the blood-brain barrier to infect and affect Broca’s area. Maybe that takes longer, but we don’t know because Harrelson blows his brains out.

At the end, the surviving band of apes leaves northern California, presumably schlepping eastward because of the Statue of Liberty and Myrtle Avenue subway station of the older films that depict the future.

I eagerly awaited film reviews of this latest Apes installment to dissect the gene therapy experiment gone awry. But the first 10 reviews that Google spit out were emissions of superlatives: smart, brilliant, remarkable, masterful, and wildly entertaining – curiously devoid of any mention of the science. All were written by XYs: The New York Times, Rogerebert.com, empireonline, commonsensemedia, Forbes, The Telegraph, Rolling Stone, CNN, Vanity Fair, and Collider. Digg.com helpfully provided a meta-analysis of sorts, a review of the reviews. (Note to editors: XXs can review sci-fi too!) 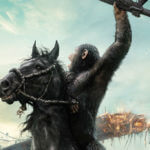 Gizmodo attempted to explain the science, albeit with some confusion over exactly what viruses are, calling them organisms and compounds and seemingly unaware that it’s the viral vector’s cargo that’s important. That review is packed with info and has some nice interviews with geneticists.

Rotten Tomatoes gave War a 93% rating, with 240 “fresh” to just 18 “rotten.” I’d love to see stats stratified by gender. Because to me, “War For the Planet of the Apes” was a testosterone-infused snoozefest whose hurried tidbits of vague science-speak reflect a huge missed opportunity to educate about genetics.