Why we need peaceful co-existence between GMOs and organics

These are two general lines of rhetorical attack made by proponents of genetic modification techniques and organic methods, respectively. The level of vitriol in this fight for market share, cupboard space and hearts and minds is quite high, making one wonder if it’s possible for both techniques to work together, in the same field and on the same farm.

The GM advantage side

In 2010, the U.S. National Research Council issued the first comprehensive overview of how well genetic modification had improved agricultural output. The report cited a list of benefits, which included the ability of farmers to reduce overall pesticide use, and use less harmful chemicals. Since farms started adopting genetic engineering technologies around 1996, they also had experienced lower production costs, and higher yields compared to conventional farming. Today, nearly all corn soybean and cotton is genetically modified, and the techniques are seen as the most promising way to ensure that a growing population on earth can continue to be fed.

Those findings were echoed last year in a study crunching data from 147 prior research reports by two prominent German professors published in PLOS ONE—A Meta-Analysis of the Impacts of Genetically Modified Crops. They concluded that crops using genetically modified seeds resulted in a decrease in pesticide use of 37 percent, a 22 percent bump in yields and a profit increase for farmers (partly because of lower input costs) of 68 percent.

At the same time, conventional and GE growers and supporters have often looked at organic farming as low-yielding and unable to feed a growing world population. They also warn against potential pathogen contamination from manure use, and some refer to supporters as religious followers.

Backed financially and philosophically by the organic food industry, GM opponents look to organic farming as a viable alternative to genetic modification. Deriding GM as a product of “Big Ag,” opponents insist that organic farming practices preserve the soil, rely less on pesticides, and can yield higher prices for produce (but not higher yields of commodity crops). They often promote organic practices, including crop rotation, tilling, and cover crops as more ecological sustainable than conventional or GM-use farming.

To this group, GM-based agriculture remains an experiment–a potentially dangerous, untested idea. GM supporting scientists are seen as financially beholden to “Big Ag,” and Monsanto is held up as the epitome of dangerous ‘corporate control of our food system’. Further, some organic farmers deride conventional and GM farmers as lazy, dependent entirely on what extension agents advise them. 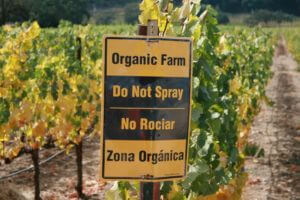 To many hard working, independent scientists and farmers, this caricature of a fight has ranged from exasperating to plain silly.

I can’t do organic because they won’t let you do any chemical, which is a bunch of crap. They won’t even let you use Roundup…There is one commercial fertilizer that I would truly love to use on organic — mono ammonium phosphate — it is not organically certified, and on our high pH soils, it makes wonderful sense to use.

Phoenix, Arizona, organic farmer Janna Anderson grows ancient and heirloom grains on her relatively small plot, and is constantly looking for different grains and traits. She also is a strong supporter of genetic modification. In an interview with the Arizona farm bureau, Anderson justified her GM support (even though she doesn’t use these techniques herself):

Biotech crops become a big advantage to everyone including the consumer. GMOs can reduce airborne pesticides, water pollution from run-off, increase yields, and generate drought resistant plants for the future and so much more. Additionally, GMOs can be very cost effective way to go and can target very specific pests rather than killing everything it touches like an aerial spray. Additionally, some GMO corn products utilize genetic engineering to insert BT, which is actually a product that is allowed in Certified Organic growing techniques.

Could it work scientifically?

Yes, organic techniques and GM technology could co-exist, many scientists have said, even those scientists who oppose the behavior of anti-GMO, pro-organic activists. Commented Bruce Chassy, professor emeritus of food science at the University of Illinois and a critic of the anti-GMO movement:

There is no inherent reason why the two can’t coexist for some crops. Weed control is the number one application of GM. In a sane world organic farmers would use GM herbicide tolerant crops and glyphosate. Since none of the rest of GM crops require any chemical additives the GM part of the equation becomes nothing more than choosing a seed which has nothing to do with the rest of the organic package of Do’s and Don’t’s. The two are totally compatible. 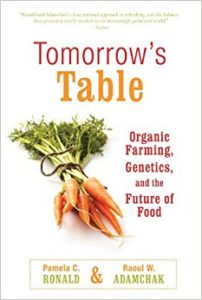 Pamela Ronald, a plant geneticist at University of California, Davis, and Raoul Adamchak, her organic farmer husband, believe that truly sustainable agriculture (that can also feed a world with 9 billion people in it) may only arise from the merger of organic and GM/conventional techniques. On one hand, enhancing soil fertility and crop diversity, efficient land and water use, and reduction in the use of toxic chemicals can come from organic practices. On the other hand, introducing traits that allow plants to use less water, can intrinsically resist pests, and don’t require carbon-releasing tilling practices would come from genetic modifications. Ronald and Adamchak’s book, Tomorrow’s Table, introduced the idea of these combined practices, and a 2011 paper by Ronald warned that neither side may alone feed the growing world:

… genetically improved seed is only part of the solution. Such seed must be integrated into ecologically based farming systems and evaluated in light of their environmental, economic, and social impacts—the three pillars of sustainable agriculture.

Other experts have noted that before anti-GMO activism gained traction, organic and GM lived a friendlier existence. “Organic and GMO farming had coexisted just fine since the first GMO crop was planted. There is nothing about a GMO crop that threatens an organic crop either scientifically or legally. This has always been the case,” said Mischa Popoff, and former USDA/NOP inspector who now is a columnist, author and expert with the Heartland Institute.

Forward thinking organic farmers, such as Rob Wallbridge, who has written numerous articles for the Genetic Literacy Project, have taken the high road, pushing for calmer voices, dialogue and mutual respect for all farmers. He stresses the sustainability vision of organic farming, but explicitly rejects the caricatures presented by fervent anti-GM activists of farmers who use GM seeds.

From a commercial farming perspective, the organic and GM-farming industries have been characterized as locked in the middle of a crisis phase, during which ideological conflict rules most arguments:

The debate between organic, conventional and GM farming, today, remains stuck in the initial “crisis phase.” Time to move on to the next phase.