It took more than 20 years to navigate the complex regulatory system, but the world’s first GMO animal to be approved for human consumption has finally made it to the dinner plate. It took so long because the quest by AquaBounty to get its AquAdvantage Salmon to market was challenged at every turn by a host of opponents — from environmentalists to politicians to fishing industry groups.

It was an opposition effort that was fueled by a lot of money and a lot of allies (including some in the US government).

Groups like Food and Water Watch, Greenpeace, Friends of the Earth and the David Suzuki Foundation campaigned against the fish; joined lawsuits against regulatory authorities in the US and Canada; and filed a litany of complaints against adopting the genetically modified fish with government institutions. While the fish has been approved by US regulators and Canadian federal authorities, it still needs to go through environmental assessment for its new production facility in Rollo Bay, PEI, Canada. The campaign against the new salmon has been marked by aggressive marketing and public relations efforts in addition to direct contacts with regulators.

In a recent Genetic Literacy Project story, biologist Laura Braden noted writings of Marc Montgomery, a Canadian journalist whose latest piece was featured on RCI–Radio Canada International in which he quoted EcoJustice lawyer Kaitlyn Mitchell. According to Mitchell:

Rather than adhering to the precautionary principle, our clients believe the Ministers approved uses of this genetically-modified food animal that were not subject to a science-based risk assessment despite the potential for serious risks to the environment and wild Atlantic salmon in the event of an accidental escape.

Montgomery left out the fact that Canadian authorities rejected these claims. He also has conveniently focused only on the views of anti-GMO activists. According to Braden:

This pattern of circulating biased data and scare reports disguised as independent journalism has become all too familiar over the past few years, and has escalated more recently in the wake of regulatory approvals in Canada and the United States. 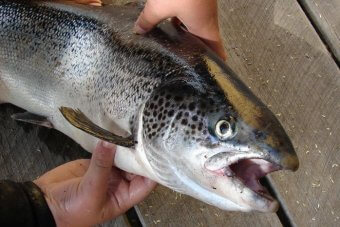 They had help, according to Canadian researcher and former salmon industry staffer, Vivian Krause, who in 2010 researched the financial and political backing behind the opposition.

Krause found that at least in Alaska, wild salmon prices started increasing between 2002 and 2006. Those prices tripled, actually. Much of this increase, she found, was due to a boost in popularity for wild Alaskan salmon that came from ratcheted marketing efforts. The money for this came from the Gordon and Betty Moore Foundation, based in Palo Alto, Calif. Gordon Moore is an Intel co-founder and an avid wild salmon fisherman. This foundation gave about $500,000 to Seaweb, a nonprofit environmental group, to “coordinate an anti-farming campaign,” to “shift consumer and retailer demand away from farmed salmon.”

The Moore Foundation was not alone. Krause dug some more, and found four US foundations that sent $126 million to Canadian nonprofits opposed to salmon farming. Another foundation, the David and Lucile Packard Foundation (started by the Hewlett Packard co-founder), between 2006 and 2010 spent $3 million on “consulting firms to support the so-called ‘sustainable seafood movement.’” The foundation has donated $75 million between 2000 and 2009 to promote organizations that back “wild” and “ranch-caught” salmon, while “reforming” aquaculture.

These NGOs and foundations also had government help.

In Alaska, overfishing and substandard quality had made serious dents in the value of the state’s salmon harvest. That harvest’s value went from $740 million a year until the century’s turn; it was just $125 million in 2002. Farm salmon has been blamed, in part, for the decline. Then-governor Frank Murkowski introduced a $50 million strategy to re-market wild Alaskan salmon, including showing how the “wild” salmon differed significantly from farmed fish.

Members of Congress, particularly from Alaska and other Pacific states, had long opposed the adoption of the new salmon. The opposition even crossed party lines — linking Republican Senator Lisa Murkowski of Alaska and Democratic Senator Patty Murray of Washington.

In 2011, Alaska Rep. Don Young and California Rep. Lynn Woolsey tried to stop the FDA from approving AquAdvantage (or any other, should they have existed) genetically modified salmon. “Frankenfish is uncertain and unnecessary,” Young said. “Any approval of genetically modified salmon could seriously threaten wild salmon populations as they grow twice as fast and require much more food.”

Of course, none of those claims has proven true.

Fishing industry groups, especially on the West Coast (home of the pink salmon, one of seven species of Pacific salmon), also opposed the approval of AquAdvantage. According to the Oregon Salmon Commission, if it was approved it should be labeled as genetically modified.

“We’re getting to the point where people want to know which fisherman caught their fish,” commission administrator Nancy Fitzpatrick said. “If they don’t label it, consumers won’t have a choice to know whether (the gene) is in that fish or not in that fish.”

Meanwhile, in Canada, the drumbeat against aquaculture continues. According to the site Farmedanddangerous.org, run by the Coastal Alliance for Aquaculture Reform, a group started by a grant from the Packard Foundation:

Whereas the dollar value difference between wild salmon marine industries and aquaculture is not highly significant, wild salmon industry jobs far outweigh the few jobs provided by the aquaculture industry.

About that “wild” type

Pink “wild” salmon weren’t exactly born wild. More than half of them, according to a report from the State of Alaska, start their lives in the “salmon enhancement program,” more familiarly known as a fish hatchery.

Still others are raised as young adults in stocked bodies of water. Down south in Washington, Oregon, and California, that number could approach 90 percent. Advocates of these so-called “wild” fish have insisted that they are to be referred to as “ranched,” and not “farmed.”

Looking back, AquaBounty communications director Dave Conley said that most businesses involved in aquaculture hoped that opposition would quietly go away. It didn’t. Salmon farming started growing as an industry in North America in 1985 to 1990,” Conley said in an interview.

Aquaculture became a good target for environmental groups, because nobody knew anything about it. Then, the State of Alaska started a campaign of wild salmon versus farm salmon, and was opposed to farms. Japan originally bought a lot of Alaska’s wild salmon, then switched to farmed salmon because it was available year-round. Alaskan salmon prices started dropping, so they looked to tarnish the competition to boost wild salmon sales.

With wild salmon, organizations were talking about the demise of salmon runs, reduced populations. Fishing kills fish. If you’re worried about these runs, then don’t fish them. It would make sense to start farming salmon instead.