It started in May with a web post by People for the Ethical Treatment of Animals (PETA). “Tell Yale University to Stop Tormenting Birds!” the headline read, followed by text accusing postdoc Christine Lattin of wasteful experiments and animal abuse in her research on stress in wild house sparrows. Then the emails from PETA supporters began flooding Lattin’s inbox: “You should kill yourself, you sick bitch!” Then the messages on Facebook and Twitter: “What you’re doing is so sick and evil.” “I hope someone throws you into the fire …”

By the end of August, PETA—based in Norfolk, Virginia—had organized three protests against Lattin, and she says she was getting 40 to 50 messages a day. “Every time I went to check my email or Twitter, my heart started racing. I worried there might be another message. I worried about the safety of my family.”

In mid-June, about 20 activists—most PETA employees—demonstrated outside a conference building in Long Beach, California, where Lattin was presenting her work. Signs read: “Christine Lattin: Stop Torturing Birds!” A month later, posters appeared across Yale urging the university to shut down Lattin’s work, and more than a dozen PETA supporters held signs on a busy street corner in downtown New Haven, Connecticut. And in August, PETA posted a video on its Facebook page featuring ominous music and pictures of Lattin overlaid with text claiming that she lured birds from the wild to torture them. The video received nearly a million views, and protesters demonstrated again, this time outside Lattin’s research building. PETA is organizing another protest—outside Lattin’s home—on 13 September. It has shared her home address and a Google map of her location with its supporters. 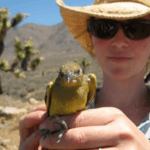 Lattin is an unusual target. She’s a self-professed animal lover with a background in bird rescue; her studies are far less invasive than the research PETA has traditionally gone after; and she’s only a postdoc, much younger and less established than any scientist the group has singled out before.

The GLP aggregated and excerpted this article to reflect the diversity of news, opinion, and analysis. Read full, original post: PETA versus the postdoc: Animal rights group targets young researcher for first time