There’s ‘Big Ag’ and ‘Big Organic’—How much does ‘big’ matter when it comes to sustainability?

Organic farming has grown a lot over the past 20 years. It’s been touted as an alternative to conventional farming and some activists have pointed to organic as an answer to “Big Ag,” the large, corporate controlled farming that they say is behind the use of chemical pesticides and genetically modified organisms.

But some experts are starting to say the organic industry isn’t any better and may in fact be just as problematic as “Big Ag.” Let’s call it the ‘Big Organic’ phenomenon.

Lisa Clark, a University of Saskatchewan research associate, has published papers and a book looking at what she believes has been the erosion of the original principles of organic farming.

According to Clark, the organic industry has been overtaken by larger corporations that have shifted a focus on organic growing from process to selling/marketing a final product. She points to California organic farms, which can be 1,000 acres and use heavy machinery and oft-illegal migrant labor. She also points to an economic consolidation in which four firms—Hain-Celestial Group, United Natural Foods International, Whole Foods Market and Kurig Green Mountain—control nearly all the organic industry in Canada and the United States. To her, this is no longer “a counter movement to industrialized agriculture’s devaluation of social and environmental relations in the production process.” 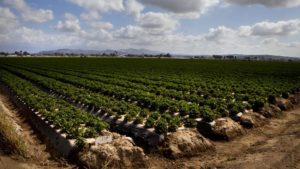 While organic growing has certainly changed from its 1960’s roots, is “Big Organic” really better than “Big Ag?”

It depends on what you think of “Big Ag,” too. You can be big, and still be organic.

Organic supporters like the Cornucopia Institute have pointed to practices by farms that label themselves organic but may be anything but. According to Cornucopia:

One of our first activities was exposing industrial-scale, confinement style, dairies with 4,000-10,000 cows that were producing organic milk for the Horizon label (Dean Foods/WhiteWave) and Aurora Dairy (private-label milk to Walmart, Costco, Target and a number of grocery chains).

Cornucopia took flyer photos of these “organic” farms and filed complaints with the certifiers of those farms. But even these farms were not practicing organic farming techniques they should have.

What if a farm was that big but still using organic practices?

They’d still be organic, said Mischa Popoff, a former organic farm inspector in the U.S. and a frequent critic of the way organic farming is regulated and handled today.

“Both the philosophy and the rules of organic production make no mention of size or market area, as well they should not. The three tenets of organic farming are: 1)To build soil through composting rather than synthetic fertilizer; 2)To avoid the use of synthetic pesticides; 3) To avoid GMOs”

The first tenet is more than a century old, while the anti-GMO stance is about 20. However, the size of the farm has nothing to do with how it’s farmed. You’d just need a lot more compost on 1,000 acres.

While researchers like Clark think there’s a difference in products because of the corporation doing the producing, farm performance is not necessarily dependent on size. Big farms can use careful soil stewardship, organic practices, or they may not. Same with small farms. And there’s nothing in the National Organic Program about the size of the farm, or the distance traveled to deliver organic produce. Whether long distances or large acreages to grow organic (or non-organic) food is sustainable, however, is another matter.