Glyphosate’s use in Europe may have a five-year lease on life, thanks to an EU vote that pitted Germany (in favor of the chemical) against France (which was opposed). The vote on using the world’s most popular pesticide came after several rounds of abstentions and an earlier non-binding vote to ban that showed a lack of consensus more than an iron-clad decision.

But five years goes quickly, and member nations may still be able to restrict glyphosate’s use. And in five years, member country governments (particularly Germany’s, now in its formation stages), could look very different. In fact, the Nov. 27 vote to grant glyphosate’s use was close, when Germany voted in favor of use after months of not voting.

Whether or not glyphosate will be banned permanently remains up in the air, but the EU electoral drama over the past year has generated discussions over the potential economic impact. In the United States, pressure from anti-GMO organizations continues to mount because of glyphosate’s use with “Roundup Ready” crops genetically modified to resist glyphosate. In Europe, where such crops were never approved, the issues have revolved around potential health problems from using glyphosate as a conventional herbicide. 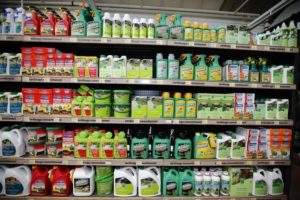 Glyphosate was registered for use in more than 130 countries as of 2010. Analysts have estimated Monsanto could lose out on up to $100 million of sales if glyphosate is banned in Europe, according to Reuters. Of course, since the patent for glyphosate is now in the public domain, many other firms also manufacture a version of the herbicide and could also stand to lose.

Considering the lack of a true alternative – with the same effectiveness on weeds, toxicity profile, and cost of use – the economic impacts look significant. Even Charles Benbrook, long an advocate for organic practices and an opponent of the use of GMOs, once wrote a warning against banning glyphosate completely: 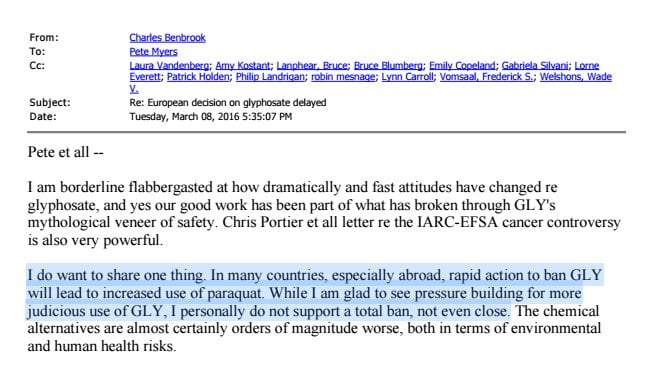 Meanwhile, back on the farm

In response to the European Union vote, the president of the French Grain Producers’ Organization wrote Vytenis Andriukaitis, European Commissioner responsible for glyphosate issues (and the Commissioner for Health), in October:

I will suffer significant damage, including a significant increase in my production costs (use of larger amounts with other herbicides and increase in the frequency of herbicide treatments), dirtying of my plots with many weed species, including perennials. My working methods should evolve with a return to plowing, the removal of new simplified farming techniques, based on plant cover. I could not practice agroecology anymore.

Meanwhile, in the United Kingdom, where in 2014 2.2 million hectares of farms—a third of arable land—was treated with glyphosate, Oxford Economics estimated the impact would reduce wheat yields by 12 percent, oilseed/rape yields by 14 percent, and cereal production by 15 percent. Agricultural contributions to the nation’s GDP would shrink by about £930 million ($1.23 billion).

The German Kleffmann Group and others noted that the loss of glyphosate would force more farmers into conventional plowing (tillage), which increases output of carbon dioxide, consumption of diesel fuel and use of heavy machinery, with all the accompanying environmental problems that herbicides like glyphosate were designed to eliminate. That comes to 180,000 more tons of diesel and 18 million more hours of labor in Germany alone. 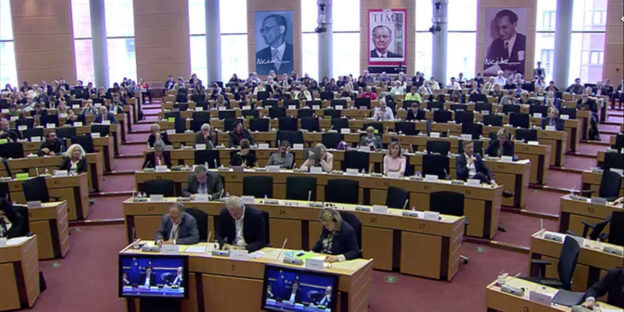 A ban also will affect world trade of not only the pesticide but also of foods grown. If a true ban comes to fruition, then it would be up to the EU and/or member countries to decide to ban imports of food grown with glyphosate.

And a lot of food grown with glyphosate is imported into Europe. Annually, the EU imports tens of millions of tons of genetically modified (“Roundup Ready”) soybeans and other crops, used for animal feed. This import could be halted if the EU decides that, based on health measures, that the tolerance level of glyphosate in imports (or any other foods and crops) is reduced from 20 milligrams per kilogram to 0.01 milligrams per kilogram. If the decision by the EU is made for non-health reasons, then the tolerance level can be higher than 0.01 mg/kg.

But with Andriukaitis the EU Health Commissioner in charge of glyphosate issues, and the arguments so far being based on health (and the IARC monograph’s connection to cancer), the decision to ban will likely be a health-based one. Which means, David Zaruk, Belgium-based risk specialist says, that farmers won’t have as much influence on the decision as they might if it were being debated by the EU Agriculture Commissioner. Anti-pesticide groups like Pesticide Action Network, Friends of the Earth and others, including the European Green party, “are tying glyphosate to health issues, not as a GMO issue since there are no glyphosate-resistant seeds in the EU. The farmers don’t have much voice here since the dossier if handled by the Health Directorate,” he said in an email interview.

Some organic groups point to the possibility of glyphosate-free farming, but admit it won’t be cheap or easy. Urs Niggli from the Research Institute of Organic Agriculture (FiBL) in Frick, Switzerland, maintains that farming can go on without glyphosate, but “For a truly environmentally friendly agriculture without glyphosate, the whole system would have to be changed in the USA, Brazil and partly also in the EU: establish multifactorial crop rotations, sow ground cover crops like clover and grass regularly to suppress the weeds, as well as undercutting for maize and grain.”

As for the European Union, the future of glyphosate – and the farms using it – remains uncertain in the long term. Green and other anti-glyphosate members of Parliament continue to ignore all European agency reports except the 2015 IARC monograph that declared (under its specific definition) glyphosate to be “probably carcinogenic. Bart Staes, a Belgian Green member of the European Parliament, told Bloomberg BNA that “there are credible concerns regarding the safety of glyphosate,” and that the EU/EC should find “sustainable alternatives.”