‘Big Ag’ may resonate with activists, but what does it really mean?

When opponents to the first wave of genetically modified crops and foods started objecting, one major focus was on the corporations behind innovations like Bt corn or Roundup Ready soybeans.

A term that was (and is) often bandied about is “Big Ag.” It’s become an all-encompassing term to describe a world in which all farms are owned by major corporations, which also control the nation’s (if not the world’s) supply of seeds, plants, food, machinery and land. However, it is not entirely clear that this world actually exists.

On one hand, GMO-opposition groups like Greenpeace point to “Big Ag” as the consolidation of farming into corporations that, among other things, are forcing transgenic and other modified foods upon us:

Industrial ag is a system with an expiration date. It’s only a few decades old but just start adding up the environmental costs we are incurring by his broken system. More and more polluted waterways, clear-cut forests, inhumane treatment of livestock and megatons of greenhouse gases. It’s quite simply unsustainable. Thousands of workers in this industrial farming system see what’s going on. They are on the frontline witnessing the havoc caused by this system run amok. Field workers are forced to spray unnecessary toxic chemicals on their crops. Giant corporations sue small farms when patented GMO seeds accidentally blow into their fields.

On the other hand, some groups, like this one, call themselves “Big Ag,” and pass information (and advertising of equipment) that’s designed for large-scale farming:

The USDA says 97 percent of farms in the U.S. are family owned. And the average size of a U.S. farm is less than a thousand acres. So, where are we? Is there a Big Ag out there?

Farming—and all the economic activity around it—started growing long before we knew what DNA looked like. Since 1900, and especially since the end of World War II, agricultural has been transformed on nearly every level, according to the USDA: 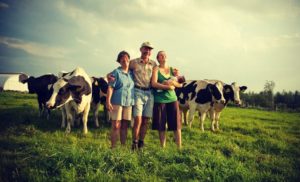 A number of things brought this about:

First, technological changes made these efficiencies possible. Mechanization was one, as the number of tractors, for example, jumped from less than a million in 1930 to just shy of five million in 1960.

Second (and perhaps most important), there was the Green Revolution. Most often attributed to the work of Nobel Laureate Norman Borlaug, who worked improving corn harvests in Mexico and other improvements in the Philippines and Pakistan. This movement started in the mid-20th century and introduced greater crop yields through the use of chemical fertilizers and pesticides, as well as more advanced crop breeding techniques.

Third, price stability made farming less risky. As any farmer knows, there’s no such thing as risk-free farming, but farm prices went through roller-coaster highs and lows in the 1920’s and 1930’s. New Deal reforms starting in the 1930’s helped control prices by controlling farming outputs, including subsidies to reduce planting.

So, by the end of World War II, things were ripe for growing and thus productivity grew by 40 percent from 1950 to 1970.

And this is where the corporate part of “Big Ag” starts to appear. Some writers like Tom Philpott of Mother Jones and other activists look at the “corporatization” of farming as starting with a now-obscure Agricultural Secretary—with the unfortunate name of Butz. Earl Butz served Presidents Nixon and Ford as Agricultural secretary, and he’s famous for saying “get big or get out,” farming “fencerow to fencerow”, and otherwise getting farmers to become as large-scale as possible (he’s also known for saying some other things, but you can just Google those).

But consolidation of farms and farming services, as we’ve seen, started long before Earl Butz raised his right hand to take the oath of office. Farmers started planting more because they could make more money, and they needed help from bigger suppliers. So, today, we see a handful of major corporations that supply the inputs and outputs for farms: Monsanto, Syngenta, Dow AgroSciences, DuPont, Bayer, and BASF top the list, which also include a few newer companies from Eastern Europe and South America.

For farmers, while 97 percent of farms are small, family run operations, the economic value from all our farms come from a very small percentage of larger operations. This is also a result of farming consolidation and concentration on one or two crops we see today. And these operations can’t rely on a dozen small seed companies or six tractor manufacturers.

These waves of consolidation have good and bad sites. As Gary Truitt recently wrote in Hoosier Ag Today:

Farmers are demanding more integration between their seed, chemical, mechanical, and big data products. Companies who can do this will have a competitive advantage.Farmers will need to have a pipeline of innovation going forward to meet the demands of the world food market and of the changing environment. Only having a few big players can provide this innovation, yet it can also lead to the stifling of invasion.

As anti-GMO groups like Cornucopia Institute have pointed out, there isn’t just a Big Ag now, there’s also a “Big Organic,” as that industry has consolidated, too. Big farms can be organic, just as much as small ones. One ironic side effect of the consolidation of agriculture, whether it be GM, conventional, organic, is that the labor savings from the past 60 years have given us the time to argue about it.