This article or excerpt is included in the GLP’s daily curated selection of ideologically diverse news, opinion and analysis of biotechnology innovation.
The cultivation of genetically engineered (GMO) crops hit record levels in 2016, with 18 million farmers planting 185.1 million hectares (457.4 million acres) of biotech crops globally, according to a new report.

The total represented an increase of 5.4 million hectares (13.3 million acres), or 3 percent, over 2015, according to a paper published in GMO Crops & Food by Rhodora R. Aldemita and Randy A. Hautea of the International Service for the Acquisition of Agri-Biotech Applications (ISAAA).

“This is the highest area of biotech crop adoption since its first year of commercialization in 1996, which was just 1.7 million hectares (4.2 million acres),” wrote Hautea, ISAAA’s global coordinator, in the organization’s annual report. “Thus, there has been a ~110-fold increase over a period of 21 years, making biotech crops the fastest adopted crop technology in recent times.”

The US is the top producer of biotech crops, followed by Brazil, where 93.4 percent of the soybean, maize and cotton crops are biotech. The country is also developing GE varieties of beans, sugarcane, potatoes, papaya, rice, and citrus.

Argentina is the third-largest producer, growing soybean, maize and cotton. It has recently approved a virus-resistant potato developed by an Argentinian scientist. Researchers there are also working on drought-resistant wheat and herbicide tolerant sugar cane.

Related article:  If every country ate like America, the world would run out of farmland, study claims 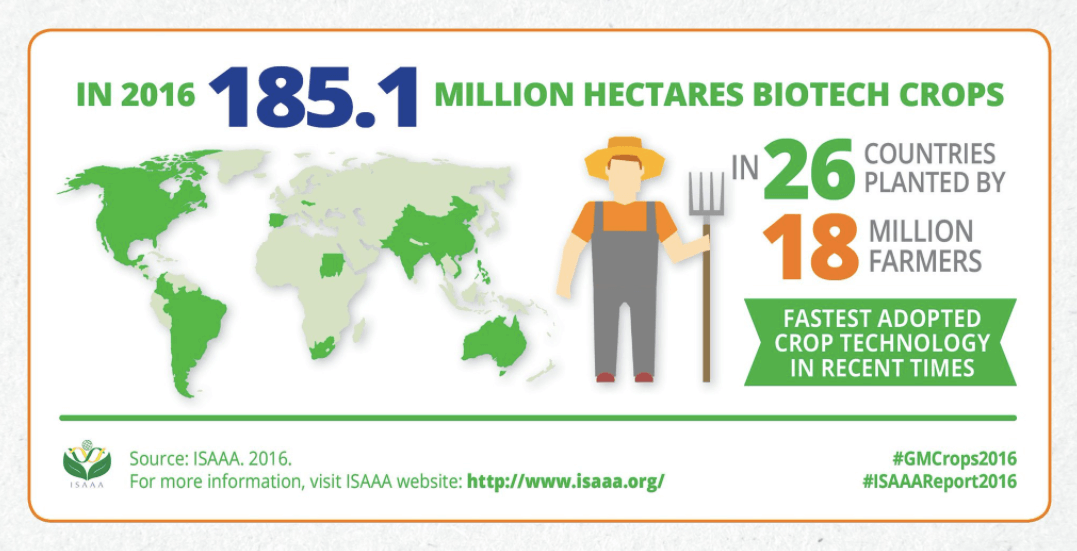 In the European Union, just four nations planted biotech crops, led by Spain and followed by Portugal, Slovakia and Czechia. Though insect-resistant maize is the only GE crop approved for cultivation in the EU, the amount of land in production with that crop increased by 17 percent from 2015 to 2016.

India remains the world’s top cotton-producer, and 96 percent of it is genetically engineered with the Bt insect-resistant trait. However, for the first time in 14 years a slight drop was recorded in the amount of land cultivated in Bt cotton. Field trials have been approved for chickpea, rice, cotton, maize, sugarcane and Bt brinjal, but the adoption of GE mustard has been stalled due to opposition by activists.

“The biotech farmers in various countries, who commonly profess that growing biotech crops have helped them send their children to school, acquire a home for their families, and live a healthier life with less pesticides, will continue to be our inspiration to make our best efforts in knowledge sharing, engagement, and support to technology development,” Hautea wrote.

Joan Conrow is a journalist in Hawaii, where she writes about agriculture, the environment and politics, often for the Cornell Alliance for Science. Follow her on Twitter @joanconrow.

A version of this article appeared at the Cornell Alliance for Science as “GMO crops hit record high production level” and has been republished here with permission.