Sustainable AquaBounty GMO salmon, blocked in US, offers way out of ‘deadly spiral of overfishing’

One day in 1992, a technology entrepreneur sat down for a meeting with a pair of biologists who were studying the genes of fish. The scientists, Choy Hew and Garth Fletcher, were working on a method of purifying “antifreeze proteins” that would help Atlantic salmon (Salmo salar) survive so-called superchill events in the North Atlantic. Normally these salmon migrate out of the subzero ice-laden seawater of the far North Atlantic to overwinter in less frigid waters. Increasingly, though, such fish were being farmed, penned year-round in offshore cages, in near-Arctic waters to which they were not adapted. Fish farmers were looking for a way to keep the fish alive through the winter, and the antifreeze protein seemed like a possible solution. 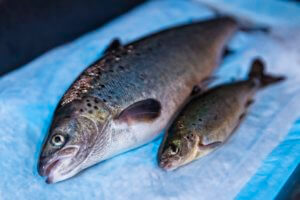 As the meeting drew to a close, Fletcher and Hew showed Elliot Entis, the entrepreneur, a photo of two fish of equal age. One dwarfed the other. “I sat back down,” Entis recalled recently.

Those salmon, grown and marketed by a company called AquaBounty Technologies that was founded by Entis, could be coming to U.S. grocery stores next year. And they could offer a way out of the deadly spiral of overfishing that is decimating wild fish stocks.

Genetically engineered fish could provide a solution, taking the pressure off wild stocks and reducing the energy and carbon emissions required to feed the world’s seafood appetite. Because AquaBounty’s salmon are sterile and raised in land-based tanks, they can’t breed with wild populations. And because they efficiently convert fish feed into edible protein, they offer a potential low-cost solution for nourishing not only affluent consumers in North America but hungry people in the developing world with little access to meat.