This article or excerpt is included in the GLP’s daily curated selection of ideologically diverse news, opinion and analysis of biotechnology innovation.
One of the main sources of nutrition for poor Ugandans, bananas, is on the verge of being wiped out by a deadly Fusarium fungus that is rapidly spreading through the continent. Known as Tropical Race 4, it has already devastated Asia and destroyed much of the banana industry in China.

There is no traditional defense against Tropical Race 4 right now, but scientists have had major success in genetically modifying banana plants so that they are resistant to the disease. The process is no different from that used to create many of the modern crops grown and consumed in the U.S. and other nations around the world. Crop improvement using biotechnology is only different from historical plant breeding in being more precise, and therefore arguably safer.

But because these crops are called GMOs, anti-biotech NGOs (non-governmental organizations) like ActionAid – many of them funded by governments and well-meaning but misinformed foundations in Europe and North America – would rather argue against sound science and allow Ugandans to become malnourished and possibly starve instead of allowing these crop-improving technologies to succeed.

Despite their anti-GMO campaigning, a long-awaited science-based “biosafety bill”, similar to others already in place in Africa, that would allow the responsible use of GMOs passed the Ugandan Parliament late last year. Subsequently, however, activist-led efforts have resulted in a series of proposed “poison pill” amendments that that lack scientific justification, and could effectively kill the development of GMO bananas or indeed any other biotech crops in Uganda.

In June 2016, I organized a group of 113 Nobel Laureates and we wrote an open letter and petition urging those blocking the benefits of GMO biotechnology to stop – especially when it comes to nations like Uganda that desperately need access to all food production tools including biotech. A total of 131 Laureates have now signed the petition. We did so because the scientific evidence shows overwhelmingly that GMOs are as safe, if not safer than traditionally-bred crops. We also know that in many parts of the developing world they are the only thing that stands between the poor and widespread starvation.

Unfortunately, opponents like ActionAid Uganda have ignored our call and have continued their well-financed campaigns to sow fear and distrust about this beneficial technology, flooding the radio with ridiculously false claims that GMOs will cause cancer and make African men infertile. One wonders if the primary backers of Action Aid and other NGOs, which include the European Union, the British Government, the Rockefeller Brothers Fund and the Ford Foundation, are aware of this unethical – and I would say immoral – propaganda campaign.

Some of the most poisonous aspects of the proposed amendments include: 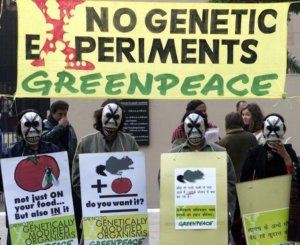 None of these requirements are based on sound science, none add anything to safety or social justice and none exist in South Africa, Sudan, Burkina Faso or other countries where farmers are currently enjoying yield, pest management and pesticide-reduction benefits from planting biotech crops. Nor do they exist in other biosafety laws in African countries such as Ethiopia, Malawi, Tanzania, Ghana, Kenya and Nigeria.  In fact, some 17 million of the 18 million farmers now growing biotech crops are in the developing world, and the vast majority of those farmers are smallholders (less than 2 hectares).

In our open letter and petition, my Nobel Laureate colleagues and I pointedly asked if the criminal and unethical campaign that another prominent group, Greenpeace, has waged against bio-fortified Golden Rice for over a decade now doesn’t constitute a crime against humanity. In my opinion, that question will be just as pertinent for other groups such as Action Aid if their scheming to block GMOs in Uganda is successful. They must not be allowed to succeed.

President Museveni and the leaders of the Parliament have been strong voices in the past supporting a responsible and science-based biosafety bill for Uganda.  Those strong voices are needed now to ensure that the labor and know-how of Uganda’s scientists, who have worked hard on behalf of the nation’s farmers is not wasted and these important tools and new crop varieties will be used to help the country move to a fully sustainable agricultural future.

Sir Richard Roberts is an English biochemist and molecular biologist. He was awarded the 1993 Nobel Prize in Physiology or Medicine with for the discovery of introns in eukaryotic DNA and the mechanism of gene-splicing. He currently works at New England Biolabs.

This article was originally published in Ugandan newspaper New Vision as “Sir Richard Roberts: Will anti-biotech activists succeed in imposing their pro-poverty agenda on Uganda?” and has been republished here with permission.