Geoffrey Kabat | June 15, 2018
This article or excerpt is included in the GLP’s daily curated selection of ideologically diverse news, opinion and analysis of biotechnology innovation.

In May, the International Agency for Research on Cancer (IARC) announced its plan to solicit comments from interested parties prior to holding an Advisory Group meeting in November to propose revisions to its Preamble, which articulates the mission and methods of the IARC Monographs program.

In recent years the Monographs program has been embroiled in controversy brought on by its assessments of a number of agents, including cell phones, formaldehyde, red and processed meat, coffee, and, particularly, the herbicide glyphosate. It is noteworthy that IARC’s assessment of glyphosate is at odds with that of many other health agencies, including the U.S. Environmental Protection Agency, the European Food Safety Authority, Health Canada, and the World Health Organization, of which IARC is a part.

Recently IARC has appointed a new director. Together with the proposed revision of its Preamble, these developments might be interpreted by some as signs that the Agency is taking a critical look at its recent performance in order to improve its process.

However, there are reasons for skepticism regarding this interpretation.

For starters, when IARC’s assessments have been criticized by researchers on substantive grounds, rather than addressing the issues in question, the Agency has typically responded by dismissing the criticisms by 1) pointing to alleged conflicts-of-interest of its critics and 2) making sweeping assertions regarding the transparency and scientific rigor of its evaluation process and the monographs themselves. In other words, the Agency has shown no willingness to examine, and possibly learn from, the identification of serious errors and improprieties in IARC’s evaluations pointed out by respected scientists.

A number of problems with IARC’s approach to identifying carcinogens in need of regulation are described below.

Since IARC is proposing to revise its Preamble, it is fitting to examine the Agency’s use of “hazard” rather than “risk” – a distinction, which has long been enshrined it the Preamble. According to IARC “a cancer ‘hazard’ is an agent that is capable of causing cancer under some circumstances [emphasis added], while a cancer ‘risk’ is an estimate of the carcinogenic effects expected from exposure to a cancer hazard.” Here, “exposure” refers to actual human exposure levels. The Agency justifies the focus on hazard by arguing that, “even when risks are very low at current exposure levels, […] new uses or unforeseen exposures could engender risks that are significantly higher.” IARC’s focus on “hazard” opens a gaping loophole, which has given IARC carte blanche to highlight results that bear little relation to exposure or risk operative in the real world. To add to the confusion, even though IARC focuses on “hazard,” the title of the Monographs refers “Carcinogenic Risk to Humans.”

IARC’s adoption of the very elastic concept of hazard is in line with the weight given to the precautionary principle in the EU Charter. The precautionary principle states that, when the effects of a policy or an exposure are unknown, steps should be taken to mitigate any potential adverse effects. However, too often this approach is taken by people who have no interest or ability to assess the relevant scientific evidence.

There are many instances in recent IARC assessments of giving weight to positive results, even when these are questionable. At the same time, often higher-quality evidence that does not support an association is ignored. You can see how this penchant aligns with IARC’s invocation of “hazard” and the precautionary principle.

A glaring example of IARC’s systematic bias in evaluating evidence is found in the assessment of rodent studies of glyphosate in Monograph 112. The Working Group classified glyphosate as “probably carcinogenic” to humans based its finding of “sufficient evidence” from the animal studies. However, as the statistician Robert Tarone has shown in a paper published in the European Journal of Cancer Prevention, the Working Group highlighted certain positive results from the rodent studies and ignored contradictory negative results from the same studies. In addition, the Working Group used a questionable statistical test, that made the results of a mouse study look more impressive than they were.

The tendency to emphasize positive findings and minimize null findings in the glyphosate assessment has been further documented by the investigative reporter Kate Kelland, who compared different drafts of the chapter dealing with animal studies and found 10 instances in which “a negative conclusion about glyphosate leading to tumors was either deleted or replaced with a neutral or a positive one.” 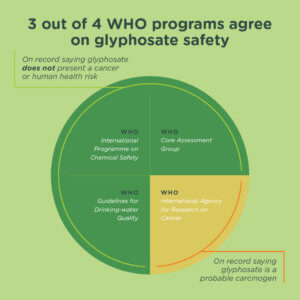 A final example of the downplaying of exculpatory evidence in the glyphosate assessment is the Working Group’s failure to take account of the updated analysis of the National Cancer Institute’s Agricultural Health Study (AHS) cohort, which provides the highest quality human evidence bearing on the association of pesticide exposure and cancer. The Monograph 112 Working Group concluded that there was limited evidence that glyphosate was associated with NHL risk in humans. A 2014 paper in PLoS ONE reported on NHL risk in the AHS associated with insecticides, fungicides, and fumigants, but excluded herbicides. The Working Group meeting in 2015 omitted consideration of updated glyphosate analyses because they were not yet published. IARC justified the omission on the grounds that it only considers published papers. However, given the importance of this study, it would have made sense either to consider the unpublished results (especially since an earlier analysis of glyphosate in the AHS cohort was published in 2005 and the updated AHS NHL analysis that excluded herbicides was published in 2014, and thus the study design and quality of the data were known) or to delay publication of Monograph 112 until the updated analysis appeared in print. The updated analysis of glyphosate appeared in the Journal of the National Cancer Institute in November 2017 and provides the most comprehensive data on glyphosate exposure among farmers and cancer risk. The authors found no association of glyphosate exposure with increased risk of cancer, including NHL. Omission of the updated AHS findings from the 2015 assessment is particularly puzzling since IARC’s glyphosate Working Group was chaired by Aaron Blair, a National Cancer Institute scientist, who was a senior investigator on the AHS.

IARC has long been concerned to guard against conflicts-of-interest, but as in the points discussed above, there is an asymmetry in its policy. IARC’s concern with potential conflicts-of-interest appears limited to those involving industry. The Agency shows little awareness of, or concern about, biases and conflicts-of-interest among academic or government researchers. These can be of a financial nature but can also involve political, ideological, and professional stakes in an issue like glyphosate use.

A key figure involved in IARC’s glyphosate assessment is Christopher Portier, an American statistician who worked for the federal government for thirty years and was special advisor to the IARC panel that declared glyphosate to be “probably carcinogenic” in 2015. Transcripts for depositions related to lawsuits brought against Monsanto have revealed that within weeks of the publication of IARC’s glyphosate judgment in March 2015, Portier signed a lucrative contract to act as a litigation consultant for two law firms that were bringing suits against Monsanto on behalf cancer victims who claimed exposure to the herbicide. It is noteworthy that Portier was instrumental in drawing IARC’s attention to glyphosate in the first place, when he chaired an IARC committee in 2014 that recommended that the Agency undertake a review of the herbicide. All one can say is that, if an industry-affiliated scientist had engaged in comparable machinations, the outcry would be deafening. 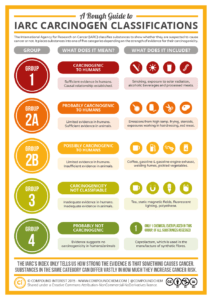 IARC reviews all available scientific evidence on a particular chemical, biological, or physical agent and classifies potential carcinogenic hazards according to the following scheme:

Of the over 500 substances IARC has assessed over the years (i.e. those not in Group 3), only one has been deemed “probably not carcinogenic” and placed in Group 4. Thus, it appears that in practice IARC’s scheme disposes against declaring that an agent is unlikely to be a carcinogenic hazard.

Finally, the main reason given by IARC for revision of the Preamble is to take account of recent advances in the area of biological mechanisms involved in the development of cancer. In fact, this line of reasoning is worrisome. Given the complexity of biology, there are a staggering number of possible mechanisms, which are the subject of research. However, it is often unclear how a mechanism identified using a test system in the laboratory relates to the development of cancer in humans.

Regulatory agencies have given the highest priority to evidence from epidemiologic studies of the effects of exposure to a given agent in humans, when this is available. When such evidence is not available, studies involving carcinogen testing in whole animals of the appropriate species are viewed as providing relevant evidence.

If IARC increases its reliance mechanistic evidence of human carcinogenicity without reforming the questionable practices enumerated above, the Agency will only deepen the already yawning chasm between it and the rest of the scientific and regulatory community.

Geoffrey Kabat is a cancer epidemiologist at the Albert Einstein College of Medicine and is the author of Getting Risk Right: Understanding the Science of Elusive Health Risks. Follow him on Twitter @GeoKabat

A version of this article was originally published at Forbes as “Does IARC’s Proposed Revision Of Its Preamble Signal A Real Change In The Agency’s Behavior?” and has been republished here with permission.