Jestin George | August 27, 2018
This article or excerpt is included in the GLP’s daily curated selection of ideologically diverse news, opinion and analysis of biotechnology innovation.

Even though plans to colonize Mars are progressing rapidly, it is very hard to actually comprehend what a permanent life out there would be like. One can’t help but imagine it to be pretty Earth-centric; we will need to design spaces and resource solutions that provide what we need and use down here, out there. Food will definitely be an issue; sushi is probably off the menu entirely and fresh produce will become a rare and precious commodity. Hydroponic greenhouses, which are already in the testing phase at the International Space Station, are one solution for growing fresh produce on site. The success of these greenhouses, and other Mars-based initiatives, is based on their ability to mimic conditions on Earth. However, maintaining these conditions will be hugely energy-intensive to support, as well as require constant refuelling from Earth, which greatly hinders the feasibility of long-term life on Mars. But like many challenges, sometimes we need to look at the problem from a different angle to find a solution.

It is said that the most innovative and revolutionary ideas are forged at the boundaries of different disciplines of thinking. Perhaps, instead of taking our Earth-based living to Mars, we could design our Earth-based living to be more Martian. When research at the macro, astronomical level meets research at the micro, molecular level, this radical and unrealistic idea starts to get some traction. Synthetic biology, and the designing and reshaping of living organisms, could offer new solutions for these daunting outer space challenges. Recently, three local, Aussie-based synthetic biologists published a paper outlining some of synbio-based solutions for realistically establishing human life on Mars. Briardo Llorente, Thomas Williams, and Hugh Goold, based at Macquarie University in New South Wales, outline some accomplishments in the synbio field that could already offer some solutions, as well as provide new and exciting synbio goals for novel, Mars-focused solutions.

Llorente et al. focus on plants, a vital Earth-based life source for inhabiting Mars for longer than just an outer space visit. They describe how cold-tolerant and drought resistant plants, engineered for increased survival on Earth, could be useful. Such traits would be important in a Martian-adapted version of our Earth-based plants, given that conditions on Mars are significantly colder and more arid. Excitingly, they also propose new and feasible biological designs for these hypothetically Martian plants. Modifying biological processes and transferring pathways from one organism into another are not trivial goals, but are a hallmark accomplishment of synbio research. For example, the authors suggest that plants growing on Martian land could acquire nitrogen (an essential nutrient supplied in fertilizers), by sucking it up directly from the atmosphere, through synbio accomplishment of transferring the nitrogen fixation pathway from microbes into plants.

Increasing edible biomass would also be extremely beneficial to these “Mars-adapted” plants, and the authors suggest numerous synbio approaches for doing so, including redesigning root architecture for improved nutrient uptake, or improving photosynthetic productivity. Photosynthesis is sub-optimal in plants with a lot of room for improvement. Increasing photosynthetic productivity would be highly beneficial, as Mars only experiences about 43% of Earth’s sunlight intensity. Earth-based plants are also only able to use light from the visible part of the light spectrum, but synbio engineering could generate plants that can photosynthesise using non-visible, UV light, which is abundant on Mars. These are just some of the ideas proposed in the article for creating Mars-adapted plants and we highly recommend checking out their paper for more. 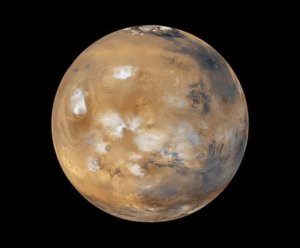 While the article focuses on plant synbio, the authors have not neglected the potential for engineered microbes to make Mars more habitable for humans and carbon-based life. A huge amount of work in the synbio field has focused on engineering microbes to manufacture a variety of products, such as chemicals, medicines, fibers, and polymers, in a more sustainable and efficient manner than traditional methods. Since it is vital that production systems on Mars be as sustainable and efficient as possible, these already existing microbes could offer realistic solutions for reducing reliance on supplies from earth. There is even more possibility when the Mars-specific problems are built into the design brief. For example, the authors describe a hypothetical microbe engineered to condition Martian soil by expressing enzymes to reduce perchlorates, the toxic compounds found on Mars, while also expressing extracellular polysaccharides to promote soil adhesion.

The publication by Llorente et al. offers an exciting overview of the potential for synthetic biology to bring life on Mars to reality. A Mars bio foundry compiling synbio parts and pathways for solving many production and food-based limitations on Mars would decrease reliance on Earth based resources. This is critical, not only because of resource limitations, but also because of the cost of time and monies on continuous cargo delivery. However, it is strange to think that one of the most realistic solutions to overcome these limitations is in fact not Earth-centric at all, but instead require a great deal of creative thinking within the rules of biological design. On Earth, plants and microbes adapted over hundreds of millions of years through random mutations to become what we depend on today. The tools and knowledge we have acquired to understand, design and manipulate these biological systems at a genetic level means we have a new type of technology- a living, breathing, biological technology- to make this spectacular endeavour a reality.

Jestin George is a PhD student at the University of Technology Sydney, working on genetically engineering the diatom Phaeodactylum tricornutum for applications in biotechnology. She is member of the executive board and assistant communications officer of Synthetic Biology Australasia. Read more about her work here, or follow her on Twitter @jestinARgeorge

A version of this article was originally published on Synthetic Biology Australasia’s website as “Synthetic biology solutions for Mars colonization” and has been republished here with permission.