Halloween brings a cornucopia of candy body parts, so it’s a good time to review recent advances in organoid technology.

I’m missing a few body parts myself, so I have an interest in replacements that are biological: Mini-organs grown from stem cells. They’re even implanted with chips to record and send data, like this smart liver. Organoids more accurately model humans than do mice or monkeys, and can stand-in for experiments done on people. With that in mind, let’s take a look at some of the recent developments in this arena.

Polycystic kidney disease affects about 12 million people, gumming up the intricate, highly symmetrically aligned tubules of the paired organs that filter 50 gallons of blood a day. Researchers from the Kidney Research Institute at the University of Washington describe their mini-kidneys, grown from human stem cells, in Nature. The organoids are providing an unprecedented peek into the origin of the disease. The researchers can make cysts come and go, shrink or balloon, by tweaking the chemical surroundings.

“We’ve discovered that polycystin proteins, which are causing the disease, are sensitive to their micro-environment. If we can change the way they interact or what they are experiencing on the outside of the cell, we might be able to change the course of the disease,” said research scientist Nelly Cruz.

The kidneys release urine through tubes to the bladder, which comes in organoid form too. At Columbia University Irving Medical Center, cells from bladder cancer patients are being nurtured into one-millimeter-diameter spheres that may be helpful in making treatment decisions. The investigators can identify mutations as the cancer progresses in the bladder organoids, which may indicate which drugs would be most effective, and to which the cancer has become resistant.

Michael Shen, leader of the team that published the paper about the organoids in Cell, said:

Organoids are essentially avatars of a patient’s tumor. Having these personalized laboratory models, which we can make in a matter of weeks, will let us test multiple different drugs on the tumor. We’ll be able to study how bladder tumors evolve and perhaps learn how to prevent tumors from becoming resistant to treatment.

To test the predictive power of the bladder spheres, the researchers are conducting “co-clinical” trials that treat patients and their “avatars” with the same drug. That’s precision medicine!

Someday an entire human digestive tract may gestate in a lab dish, but for now, researchers are sculpting a few of the working parts.

A paper in Nature Communications describes recreating mouse salivary glands. If perfected in people, the glands might stand in for those damaged in cancer treatment or from autoimmune Sjogren’s syndrome.

Researchers from Showa University and the RIKEN Center for Biosystems Dynamics Research, both in Japan, recapitulated development using a biochemical brew to coax embryonic stem cells to form the lining tissue (ectoderm) that gives rise to the gland. Add the genes for two transcription factors (Sox9 and Foxc1) plus a pair of signaling proteins (FGF7 and FGF10) and presto! A salivary gland unfurls. Implanted into mice lacking glands with a smidgeon of surrounding mesenchymal tissue, and saliva poured forth in response to feeding the rodents citric acid.

After a swallow, saliva traverses the esophagus, the tube to the stomach. Researchers at the Cincinnati Children’s Center for Stem Cell and Organoid Medicine have created an esophagus organoid from human pluripotent stem cells, reported in Cell Stem Cell. The organoid grows to just under a millimeter in about two months.

Just as researchers fashioned the salivary gland organoid from its layer of origin in the embryo, the ectoderm, the esophagus experts reached back in developmental time to the endoderm, the inner embryo layer that gives rise to the digestive organs. They tweaked the transcription factor Sox2, which diverts developmental signals away from forming lungs to forming the esophagus.

A bit of healthy human small intestine lives at the Wyss Institute for Biologically Inspired Engineering at Harvard, created from intestinal stem cells plucked from biopsies. It’s described in a new article in Scientific Reports.

The small intestine is where digestion completes and nutrients are absorbed into capillaries looped into the finger-like velvety villi that project into the tube, reaching the bloodstream. It’s also the site of many digestive ills, infections, and inflammation.

Related article:  How math could explain the 'great mystery of human vision'

Creating intestinal organoids had been challenging because they formed thick-walled cysts in culture, not the distinctive lining that withstands the pulsing passage of food. And they lacked a blood supply.

The researchers developed a protocol that coaxed the recalcitrant organoids to form villi poking inward, just like in a body. “This approach presents a steppingstone for the investigation of normal and disease-related processes in a highly personalized manner, including the transport of nutrients, digestion, different intestinal disorders, and intestinal interactions with commensal microbes as well as pathogens,” said Donald Ingber, founding director of the institute.

The organoids sported the cell types found in the duodenum, the part of the small intestine that receives churned food from the stomach: the enterocytes that absorb nutrients, the Goblet cells that spew mucus, and cells that secrete hormones, sense signals, and regulate the microbiome. The organoids persist happily for weeks in devices called Organ Chips. Next up: the rest of the small intestine and on to the colon. 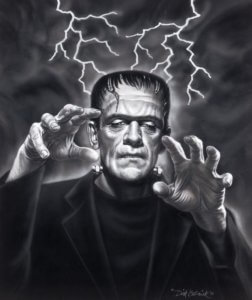 Growing human brains in a lab dish has long been more the stuff of science fiction than medical research, until organoids came on the scene. Researchers from the University of California San Diego School of Medicine have published a report in Stem Cells and Development introducing brain organoids directly grown from reprogrammed human cells, skipping the difficult stage of taking them back to an embryonic state. The approach circumvents the fact that nerve cells don’t divide, and rapidly produces “cortical organoids” from hundreds of patients at a time.

The neurons and other cells in the cerebral organoids can knit a variety of brain regions, sending electrochemical messages in step to the same gene expression cues as the neurons of a brain. The organoids already have an impressive track record.

In previous work team leader Alysson Muotri and her colleagues used their brains-in-a-dish to link Zika virus to birth defects, repurpose an HIV drug to treat a genetic brain disease, and to fashion “Neanderthalized mini-brains.”  Muotri mentioned use of the organoids to study the underpinnings of autism. “If we want to understand the variability in human cognition, this is the first step,” he said.

In another variation on the theme, researchers at Wake Forest Institute for Regenerative Medicine have developed brain organoids that mimic the blood-brain barrier, enabling them to investigate drug action.

The eyes have it

Chocolate or jawbreaker eyeballs for Halloween have been around for ages, perhaps presaging human retinal organoids.

At University College London, Robin Ali and his colleagues tested six types of viruses on their ability to deliver genes to treat specific layers of the human retina, in eye organoids, published in Human Gene Therapy. The organoids confirmed that photoreceptor cells (rods and cones) and the tile-like retinal pigment epithelium beneath them are the top spots.

Meanwhile, Robert Johnston, at Johns Hopkins University, and his team are using human retinal organoids derived from stem cells to zero in on the three types of cone photoreceptors that confer color vision, published in Science. Most mammals have only two types of cones and live in a duller world.

The researchers saw that as the disembodied human retinas form, blue cones materialize first, then red and green. Surprisingly, the molecular switch to delineate the colors is thyroid hormone, made right there in the eye, not the thyroid gland. Toggling the hormone supply determined the percentages of the different cone types.

The link to thyroid hormone could explain why why pre-term babies have a higher incidence of visual disorders: they don’t have enough of the hormone from the mother. The hope is to use the findings to develop a treatment for other types of colorblindness, and similar work on the macula could tackle macular degeneration.

Johnston put his group’s work into context. “What’s really pushing the limit here is that these organoids take nine months to develop just like a human baby. So what we’re really studying is fetal development.”

With organoids increasingly standing in for animal models and human patient volunteers, body-parts-in-a-dish will continue to replicate parts of us, painlessly, in ordinary laboratory glassware.