Patrick Whittle | December 11, 2018
This article or excerpt is included in the GLP’s daily curated selection of ideologically diverse news, opinion and analysis of biotechnology innovation.

It was a murder that shocked medieval Christendom — a man of God butchered at his altar, with the church floor left splattered with “blood turned white with brain [and] brain turned red with blood”. Yet what happened next was almost as stomach-churning: as the body grew cold, the lice infesting its clothing crawled out in such numbers “[that] the vermin boiled over like water in a simmering cauldron”.

The victim was Thomas Becket, Archbishop of Canterbury – and next year sees the 900th anniversary of his birth, with the following year marking the eight and a half centuries since his bloody martyrdom in Canterbury Cathedral in 1170. Venerated as a saint by Catholics and Anglicans alike, Becket (and his lice) might appear an odd focus for discussion of the promise and potential of modern genetic science – but trust me; it’s a telling tale, not just of blood, brains and vermin, but also of sex, celibacy and deviant behavior. And gorillas. Reader discretion is therefore advised.

First,a brief background on the life and death of this Anglo-Norman saint. A London-born cleric, Becket’s ambition and ability saw him become Archbishop of Canterbury — the most senior position in the English Catholic Church — by his early 40s. At much the same time, he became a pious and frugal ascetic, most famously adopting a sackcloth ‘hairshirt’ — designed to irritate the skin — as penance for his earlier high-spirited lifestyle. (He likely also deliberately infested himself with vermin for the same purpose).

This ‘born again’ Becket soon fell out with the English king, his erstwhile friend and benefactor Henry II. By 1170, their quarrel had escalated to the point where the incensed monarch is said to have demanded, “Who will rid me of this turbulent priest?” Interpretinging this as a royal command, four of his knights left immediately for Canterbury, with the result recorded above: the brutal slaying of Becket in that city’s cathedral. (Becket’s shrine later became one of the leading pilgrimage sites in Europe.)

But what has this to do with genetic biology? Here, I’ll come clean; because of the type of creature that we are, we cannot help but be drawn to tales of violence (and sex) like that with which this article began. Explaining why this is so, however, is something that evolutionary theory — increasingly premised on genetics — must convincingly address.

In this case, then, St. Thomas stands as a particularly graphic proxy for many of the problems faced by any evolutionary explanation for human existence. For a start, any such account must adequately explain the physical evolution of human beings (for instance, how they came to be upright naked apes, able to make tools such as swords and hairshirts). And this is the easy part; any plausible scientific explanation of our species must also tackle the origins of human social structures – from historical knights and kings, priests and peasants, to the myriad cultures of the seven or so billion of us who now inhabit this planet. Harder still, it must also explain why we humans act as we do; from the banalities of everyday life to the extremes of behavior exemplified by the 12th century Archbishop of Canterbury. (Modern day examples of evolutionarily baffling behavior range from suicide bombers to those, in the words of psychologist Geoffrey Miller, who think it’s a great idea to buy “a Hummer H1 Alpha sport-utility vehicle for $139, 771”.)

Why, for instance, would any sentient being — let alone the most intelligent one yet known — intentionally torture itself, especially through exposure to disease-bearing parasites? And why would such a being join numerous others in abstaining from sexual reproduction, as members of the avowedly celibate Catholic priesthood willingly did? Surely human beings’ evolved ‘selfish genes’ — those directed solely at survival and replication — could never allow such aberrant activities? Furthermore, why on earth would the conspecifics of any such being encourage and revere such ‘unnatural’ behavior?

To begin, then, with our physical roots. Although Charles Darwin, in his Descent of Man (1871), had predicted an African origin for humankind, it took over a century for this to be confirmed by the newly-emerged field of molecular biology — a science of which Darwin was entirely ignorant. In so doing, from the 1970s on, genetic research also revised the timings of human divergence from the our nearest primate relatives, from nearer 20 million years ago to well under 10 mya. (See, for example, the dramatic updates between Origins (1977) and Origins Reconsidered (1992) by anthropologist Richard Leakey.)

And — bringing us back to Becket — the DNA evidence of this human/primate split has been neatly confirmed by the genetics of human parasites; in this case, the various lineages of lice that make a bloody living on all great apes’ bodies, including ours. With us humans, the three related sub-species of these ‘vermin’- head lice, pubic lice and body lice — each have tellingly different genetic histories. Briefly, human head lice are most closely related to chimpanzee lice, with the genetic differences between the two sets of parasite neatly tracking the genetic differences between their hosts (with both indicating species divergence around 5-8 mya). Similarly, the more subtle differences between human head lice and body lice —  marking a divergence roughly 80-150 kya – provides evidence of when our ancestors first adopted clothing. 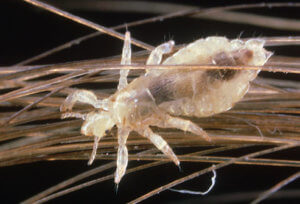 Human pubic lice, however, are an embarrassing exception. Here, the genetic evidence suggests a more recent split from the ancestral primate parasite, one nearer 3 million years ago. But we got these lice, not from chimpanzees, but from gorillas (from whom we diverged much earlier). Quite how we caught these critters is open to debate; possibly we picked up our pubic lice from sleeping in abandoned gorilla nests, not with the nests’ original occupants. (Yeah, right! And we picked up Neanderthal genes by sleeping in their caves …)

Moving swiftly on. Bolstered tremendously by recent genetic research, the overwhelming evidence of human physical evolution is firmly established. Less accepted, though, are evolutionary explanations for cultural evolution, with speculation on the genetic basis of human behavior more problematic still. And given the odious political history of earlier evolutionary accounts of human society and behavior — from Social Darwinism to eugenics to the horrors of Nazi racial biology — this is hardly surprising.

And yet, again prompted by the modern revolution in molecular biology, there is growing appreciation of the role that genes play in individual and social behavior, and in cultural evolution. The classic example of the latter — of the interplay between genes and culture — is the ability to digest milk as adults, which originated in certain cattle-rearing populations in Eurasia and Africa within the last 5,000 years. This capacity – the result of simple gene mutation and selection – opened up a rich new supply of nutrition and energy, in turn providing a competitive advantage for some groups relative to others. Other examples of ‘gene-culture coevolution’ include disease resistance, such as the heightened immunity to malaria — conferred by a genetic mutation that also causes sickle cell disease — that helped the West African Bantu peoples expand through sub-Saharan Africa.

But if genetic changes could have influenced cultural behaviors, why not the psychological behavior of individuals within that culture? The psychological demands of living in large, sedentary societies after the advent of agriculture, for example, would have been very different from those in smaller, nomadic hunter-gatherer groups. (A useful analogy here is the behavioral changes in cattle brought about through domestication; did increasingly large and complex social organisation post-agriculture similarly tame human psychology?)

As yet, this remains a speculative area for enquiry — and a controversial one; that is, it implies the possibility of evolved psychological and behavioral differences between individuals and groups as a result of different environmental and cultural histories. Pulitzer Prize winner Jared Diamond’s best-selling Guns, Germs and Steel (1997), for instance, is a well-known environmentalist account of the causes of modern inter-group inequality; yet while Diamond emphasizes the genetic basis of group differences in disease resistance, he also vehemently rejects the possibility of meaningful psychological differences between disparate human populations.

Be this as it may. At the individual level, at least, ever-increasing evidence — including the ‘big data’ from polygenic testing (which correlates the influence of thousands of genes from thousands of individual genomes) — suggests a much greater role for genetics in the different life outcomes of human beings than has hitherto been acknowledged. Yet this, too, is an area of ongoing controversy and debate, touching as it does upon the politically sensitive issue of the determinants of human difference.

The genomic age, it seems, is not just one in which we are increasing able to understand (and perhaps even master) the underlying causes of human frailty and disease; it is one where we must face the similarly increasing social, political and ethical dilemmas raised by this knowledge.

Here, though, we can retreat swiftly back to the lice-infested saint with which we began. Genetically-based evolutionary theory has both corroborated and expanded the established facts about how human beings (and their parasites) came to be as they are. Increasingly, though, it could help us understand the range and limits of human social organization, from hunter-gatherer groups to Becket’s feudal society to today’s liberal democracies. And evolutionary-informed research is also increasingly able to probe human group psychology, examining the underlying basis, say, of the thinking that leads humans to venerate saints or indulge in the status-seeking of buying a Hummer.

Ideally, such understanding might one day inform the political decision-making needed to bring about a better, fairer world. At the very least, it could help us comprehend the oddities and absurdities of our behavior — including why a little blood and sex can trick us into reading about the genes that may influence that behavior itself.