Tom Karst | Packer | December 19, 2018
This article or excerpt is included in the GLP’s daily curated selection of ideologically diverse news, opinion and analysis of biotechnology innovation.

More than 99% of [fruits and vegetable] samples tested in the U.S. Department of Agriculture’s Pesticide Data Program had residue levels well below levels established by the Environmental Protection Agency.

The USDA published the 203-page 2017 annual summary on Dec. 17 and said 53% of samples had no detectable pesticide residue (see graph below). 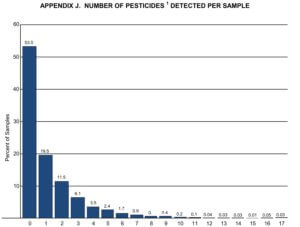 “This report shows that when pesticide residues are found on foods, they are nearly always at levels below the tolerances set by the U.S. Environmental Protection Agency,” the report said.

USDA and EPA work together to identify foods to be tested on a rotating basis, according to a news release.

[Editor’s note: According to the USDA data, approximately one-half of one percent of foods had pesticides over tolerance levels, which themselves have a built in factor of at least 100x). Of that half percent, more than half the products were imported. So US grown food represented less than one-fourth of one percent above tolerance levels: