Viewpoint: Here’s why we don’t have to worry about a world without insects

This article or excerpt is included in the GLP’s daily curated selection of ideologically diverse news, opinion and analysis of biotechnology innovation.
Please don’t be scared by recent news stories about the coming insect collapse; it’s just journalists hyping things up again. Insects can’t vanish and we will continue to be able to grow crops. The study itself involved a lot of extrapolation from inadequate data. It’s not the study authors’ fault, it’s just that there hasn’t been that much research done on insect populations to draw on.

The number of studies they found, 73, is not a lot for the whole world. The authors are also getting criticism on Twitter from experts for the way they conducted the survey. For instance, they found studies to review with a literature search in “Web of Science” for “[insect*] AND [declin*] AND [survey],” which likely biased the results in favor of insects that are declining, and probably missed many surveys that didn’t use the term “survey.”

They should have stated the limitations of their survey, and they didn’t seem to take the extra care needed for a paper likely to influence public opinion and decision making. This was a traditional review, not the carefully conducted systematic review that we see in medicine that was first used in conservation in 2006. See: Making literature reviews more reliable through application of lessons from systematic reviews for more information. 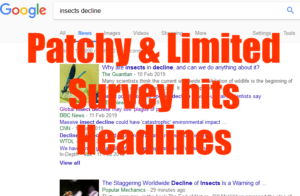 This is another example of hugely hyped up research with click bait headlines. Journalists do love a good “catastrophe” – and this is generating terrifying headlines for the easily scared. 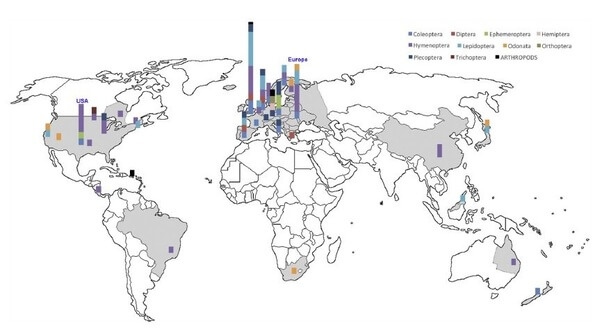 Most of the studies are from Europe or the States and many are just for the UK, which is one of the best studied areas, and even those studies only focus on particular groups of insects.

There could be a boom of grasshoppers or ants, say, in the UK, or even worldwide, and we just wouldn’t know because there haven’t been any comparative studies, as grasshoppers and ants are included in the many insects that their search didn’t turn up any studies for.

The issue here is that to compare populations you need to know the figures from many years ago to compare with the present. But most parts of the world just don’t have any insect population figures from a decade ago, or several decades ago. There isn’t really any way to fill those gaps, except looking forward, to see what happens in the next decade or so. We can’t go back in time and survey insect populations in the past if nobody did it at the time. This study is more important for highlighting how little we know about insect numbers.

Yet this story is just running without comment in all the top news sources. It was featured on the BBC News with a long segment about it in “Beyond 100 days” and an interview with one of the researchers. For a study that is likely to influence decision makers and public opinion, the authors should have made clear how patchy the data is, and the non-systematic nature of the review.

The subtitle there is click bait, the study does not say that insects could vanish, not as in all insects, at least, not in the abstract. Large numbers of insects are declining or going extinct, sure. However others are taking their place, as you might expect. This is from the abstract of the paper, the only part I can read:

Concurrently, the abundance of a small number of species is increasing; these are all adaptable, generalist species that are occupying the vacant niches left by the ones declining. Among aquatic insects, habitat and dietary generalists, and pollutant-tolerant species are replacing the large biodiversity losses experienced in waters within agricultural and urban settings.

Also the abstract talks about what can be done about it. The causes it lists are:

So, insects are declining for different reasons, it’s not one thing.

What may be a problem in the tropics is that the insects that are disappearing are adapted to a narrow range of temperatures and they don’t have enough time to adapt or to migrate. A study from Puerto Rico reported a big decrease in insects in one tropical forest. Fruit eating animals and birds, though, remained unchanged. That also got dramatic headlines about collapse of insects

In colder climes the results are not what you’d expect from climate change. You would expect a warmer planet to have more rather than fewer insects. The insects are adapted to the winter / summer cycles of higher latitudes and are less likely to go extinct just because of somewhat warmer temperatures.

The abstract of the new paper focuses on agricultural practices as the main driver we can address, especially reducing insecticide use and cleaning polluted waters:

A rethinking of current agricultural practices, in particular a serious reduction in pesticide usage and its substitution with more sustainable, ecologically-based practices, is urgently needed to slow or reverse current trends, allow the recovery of declining insect populations and safeguard the vital ecosystem services they provide. In addition, effective remediation technologies should be applied to clean polluted waters in both agricultural and urban environments.

Here are some comments by insect ecologist Dr Manu Saunders: 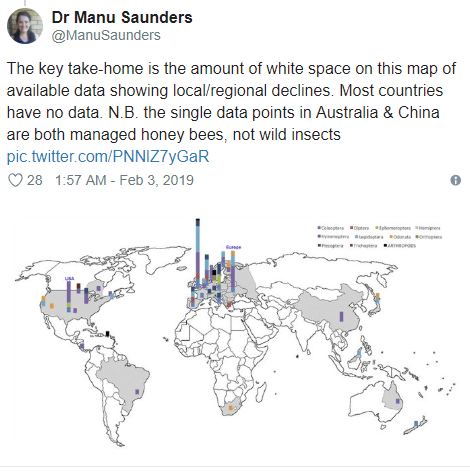 Here is a response article from the Entomological Society of America:

News reports this week about the global welfare of insects have caught the world’s attention, and rightfully so. Insects and related arthropods are critical to nearly every terrestrial and freshwater ecosystem on the planet. But projections of a looming mass extinction of insects are premature at this point.

The real cause for concern should be how much, in fact, remains unknown about the impact of human activity on global arthropod species and their populations. …

Update: More criticism of this survey in the Twitter discussions

Also the researchers found the surveys through a search for “[insect*] AND [declin*] AND [survey]” which seems likely to bias the results in favor of groups that are declining. 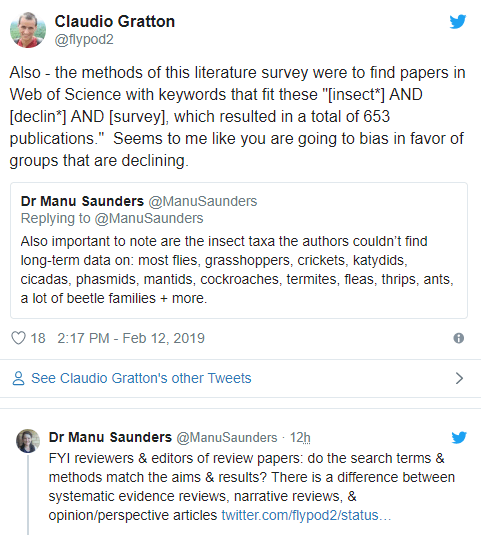 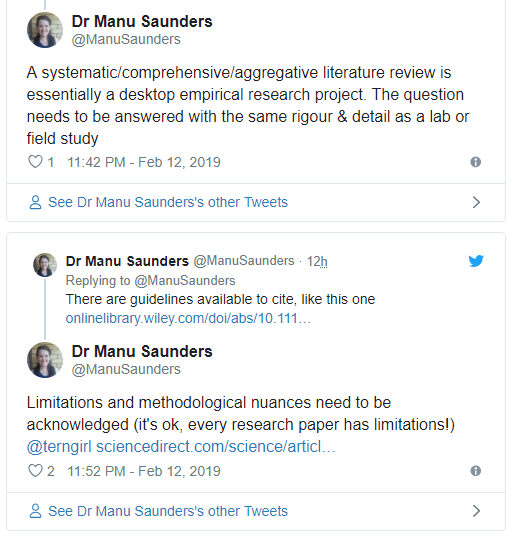 To take some of the particular examples, the German study looked at increased insecticide use and changing agricultural practices:

They don’t seem to have mentioned this research going by the map in the tweet, but there was an Australian study that found collapse of bird species due to drought caused by climate change, leading to the eucalyptus forest not flowering, probably because of the knock on effects on insects.

The honey bee is a domesticated insect, so that’s why those two data points in Australia and China are a little odd, as Saunders remarked in her tweet. Whether we have more or fewer bees – it’s a bit like asking why you have more or fewer sheep. It depends to a large extent on human decisions. But it can be more expensive for bee keepers if they have to replace colonies because of diseases like the Varroa mite. They can increase numbers of bees, or use some other domesticated insect (e.g. bumble bee).

That’s why Saunders remarked on them being “managed colonies.”

Also, only some of our crops depend on bees, but the ones that require other types of insects will also be fine too, no matter what. We can create conditions to promote whatever type of insect the crop needs.

In the US, there are no wild honey bees, though there are bees of other species. Just about all the pollination of crops that need honey bees is done by domesticated insects. Wild honey bees are rare in Europe, but the domesticated and wild bee are the same species – feral bees. They do play a role here.

So, when it comes to our crops, we don’t need to worry because we can cultivate our own insect pollinators, and we already do for crops pollinated by bees. We’re also doing things to encourage the proliferation of insects, such as establishing bee hotels.

We are not headed for a world without insects

The changing climate is bound to mean some places have changing insect species, and there will be different solutions for different places. In the German nature reserves, for instance, we should be careful about insecticide overuse and encourage field margins. In the tropics, we might have to accept that some places have fewer insects than before, at least until new insects adapt and colonize the forests. But climate change doesn’t mean a world without insects.

This is the post I did for the German study:

The Guardian article mentions an anecdotal story by one of the researchers, in which he says his car’s windshield doesn’t have as many squashed bugs as it once did. However, one likely explanation for this is that our cars are much more aerodynamic, so a lot of insects fly smoothly past the windows rather than bash into them.

So, if you also notice fewer squashed bugs on your windshield, it doesn’t necessarily mean that there are fewer insects in your area. We need more sophisticated study methods than that.

Also relevant to this are stories about a sixth mass extinction. We are not in the middle of one yet, just the start. But it seems that it would not go all the way to a true mass extinction, anyway. Also, our world started off especially diverse because it had ecosystems in many land masses that evolved in isolation from each other. As these ecosystems collide, we can expect species to go extinct even while the diversity of each individual ecosystem may actually be going up due to a mix of species from different continents. Extinctions are only one side of the story.

Robert Walker is a science writer, inventor and programmer. He holds degrees in mathematics and philosophy

This article originally ran at Science 2.0 as NOT Headed For World Without Insects – Insect Decline Survey Is Patchy & Limited and has been republished here with permission.