Key to fecal transplants could revolve around ‘recipe and preparation’

This article or excerpt is included in the GLP’s daily curated selection of ideologically diverse news, opinion and analysis of biotechnology innovation.
The secret to a fecal transplant that treats ulcerative colitis might be a change in the recipe and preparation: Pool stool from donors and prepare it in a no-oxygen environment, according to a new report in The Journal of the American Medical Association.

In the double-blinded study, about a third of the people receiving donor stool were in remission 8 weeks later, with some staying that way a year later. Only about a tenth of those unknowingly receiving their own stool improved. (Here’s my version in Medscape Medical News.)

Standard treatments for ulcerative colitis quell the overactive immune response that inflames the colon. The condition is quite painful, which is perhaps why 95% of the participants in the study reported no qualms about going the fecal transplant route.

Anatomy of a bowel movement 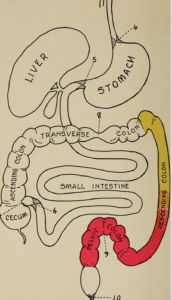 Technically called fecal microbiota transplant (FMT), the approach works by altering the community of microbes in the colon – bacteria and archaea. After removing the 75 percent of a BM that’s water, about 25 to 54 percent of the remaining solid portion consists of the microbiome. The rest is undigested nutrients, electrolytes, and mucus, with the color from bile pigments and the odor from bacterial compounds (phenols, indole, skatole, ammonia, and hydrogen sulfide).

Although FMT might not seem as granular an approach as a targeted biologic like Humera or Remicade, co-opting stool from healthy colons goes back at least 1,700 years to a 4th century Chinese physician, Ge Hong, who used it to treat food poisoning and diarrhea. In various times and places, poop has been delivered as “yellow soup” to humans and other animals (especially cattle). German soldiers reportedly infused camel feces to treat diarrhea as a result of bacterial infection during World War I. Currently clinicaltrials.gov lists 169 studies that use FMT. It may eventually find a market delivered in capsules.

When interest in FMT resurged several years ago, DIY instructions appeared on the Internet. In the classic “Why I donated my own stool,” published in The New York Times in 2013, the writer describes how her donation treated a friend’s ulcerative colitis. Steroids hadn’t worked, and he didn’t want the powerful immune suppressants, nor removal of his colon.

The FDA approved the first use of fecal transplants about a year ago, to treat Clostridium difficile infection. Efforts to deliver stool another way, for any disease, haven’t yet been very successful. One attempt using a nasogastric tube actually killed the patient, who developed pneumonia from inhaling feces. More palatable pill forms are still in the works, which I reviewed in 15 facts about fecal transplants – the straight poop.

Catering to the microbes: Keep out the oxygen

The new study zeroes in on the fact that preparing stool for transplant in whatever sort of facility – be it a lab or one’s bathroom – exposes it to oxygen. But a forming turd is chock full of anaerobes, microorganisms that thrive in environments without oxygen, such as I imagine the interior of a human colon to be. So Samuel P. Costello and colleagues, from the Centre for Nutrition and Gastrointestinal Disease, Adelaide Medical School, prepped the donations under no-oxygen conditions. And they pooled donations to increase the diversity of the transplanted microbiomes.

Three previous investigations using FMT to treat ulcerative colitis were done in the presence of oxygen and used much greater infusions of less diverse material. Changing both seemed to have made a difference.

Related article:  How the vampire bat came to feed on blood, and what we can learn from its droppings

The new study was small because it was only meant to assess a hypothesis: is aerobic preparation of stool killing the very species that would otherwise put out the fire gut of  ulcerative colitis? Would a more microbiologically diverse transplant have a greater chance of inducing remission, even at a lower dose?

The researchers gave an oxygen-starved dose via colonoscopy to 73 adults with mild to moderate disease, followed up with two more doses by enema within a week that must not have been much fun. Thirty-eight of the participants received pooled donor material and 35 received their own prepared stool, no one knowing what, exactly, they got.

The investigators used endoscopy and clinical evaluation to assess remission at 8 weeks. At that time, the folks receiving their own material were notified of their control group status and given the option to get donor FMT. By then, it had helped 12 of the 38 receiving the pooled material.

Eight weeks isn’t really long enough to evaluate whether ulcerative colitis is truly in remission, but at the one-year mark, 5 of the 12 who were in remission at 8 weeks were still doing ok, compared to none of those receiving their own stool.

Picking apart the microbiomes of the pooled stools compared to the patient ones revealed material packed with ten types of bacteria and one archaeal species that thrive in the absence of oxygen, with increased abundance of the anaerobic microorganisms. The team even singled out Anaerofilum pentosovorans and Bacteroides coprophilus as “strongly associated with disease improvement following” in donor FMT.

The conclusion: all fecal transplants aren’t alike. An accompanying editorial concludes: “pooling stool from multiple donors serves to increase the bacterial diversity of the product and the chances that material from a donor with optimal composition of bacteria in the stool will be included.”

Now that researchers know the variation on this old-fashioned treatment for quieting ulcerative colitis, the next step could be refining it further to up the chances of a lasting effect for more patients with this debilitating condition.

Ricki Lewis is a science writer with a PhD in genetics. In addition to writing, Ricki provides genetic counseling for parents-to-be at CareNet Medical Group in Schenectady, NY and teaches “Genethics” an online course for master’s degree students at the Alden March Bioethics Institute of Albany Medical Center. Follow her at her website or Twitter @rickilewis

A version of this article was originally published on PLOS Blog’s website as “New Recipe for Fecal Transplants to Treat Ulcerative Colitis: Multiple Donors and Ditch the Oxygen” and has been republished here with permission.