Fit and fat at the same time? The right genes may make it possible

This article or excerpt is included in the GLP’s daily curated selection of ideologically diverse news, opinion and analysis of biotechnology innovation.
Vigorous anti-smoking campaigns have pushed cigarette smoking to its lowest level in decades. As smoking rates have fallen, obesity has taken over as the primary villain in Western countries’ public health sagas. Obesity has been directly linked to raising the risk of a host of serious medical conditions including Type 2 diabetes, non-alcoholic fatty liver disease and heart disease.

But a mystery remains. Health experts estimate that 15 to 30 percent of people with obesity never develop these disorders. These people seem to be ‘fat but fit.’ And public health experts are in heated debate about it.

There are several pieces to the puzzle. Numerous studies have shown that carrying some extra weight around, but not too much, is protective. People who are overweight live longer. Other studies refute that claim saying that it’s only true in young people and the effect disappears with aging. Still, further studies repeatedly show that people with obesity who exercise and eat enough fruits and vegetables are healthier than thin people who don’t. But the reasons why some people can become obese, while maintaining metabolic health, are unknown.

The researchers found that a handful of genes were unregulated in the people with metabolic disease but not in the people with obesity and healthy. The genes were immune receptors, indicating there was inflammation in the tissue. Inflammation is one way the immune system responds to illness. It’s also hypothesized to cause the loss of insulin sensitivity that begins Type 2 diabetes and heart disease. From GenomeWeb:

The researchers used a weighted gene co-expression network to build inter- and intra-tissue gene networks. This enabled them to home in on PTPRE, IL-6R, and SLC6A5 as genes that could influence differences in metabolism among obese individuals.

Haja Kadarmideen of the University of Copenhagen says healthy people with obesity were not showing the high levels of inflammation that the metabolically unhealthy people were. But the exact reason they were able to store similar amounts of fat without this harmful inflammatory response still remains a mystery. When Kadarmideen and colleagues looked at the downstream effects of these three genes, they found they were causing expression changes in “many dozens of other genes” that then caused metabolic dysfunction in muscle, liver and fat tissues in the unhealthy group of research participants. 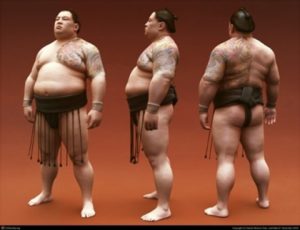 Gene expression can change the proteins a cell has to work with—so these findings indicate that fat cells in obese people are doing something different than fat cells in healthy people, said Dr. Mikael Rydén, an endocrinologist at the Karolinska Institute in Sweden and lead researcher in the study. “We think that adds fuel to the debate,” he said. “It would imply that you are not protected from bad outcomes if you are a so-called fit and fat person.”

But even though the cells from metabolically healthy obese people looked much more like those from unhealthy obese people than normal-weight people, the gene expression profiles between the two groups of people with obesity were actually different. That could actually be further evidence for the ‘fat but fit’ hypothesis. From STAT:

While the overall activity of genes was similar between the obese groups, some genes did differ between the two, both in whether their expression changed at all, and the magnitude of change.  This very observation could negate the study as evidence against the existence of fit and fat, said Dr. Samuel Klein, a gastroenterologist specializing in nutrition at Washington University School of Medicine in Missouri. “I don’t think this study has any bearing on that question,” he said. “Based on your ability to consume oxygen during maximal exercise, you can be obese and be fitter than someone who’s lean. And if you are fat but fit you have a lower risk of heart disease and diabetes than if you’re lean and unfit.”

Both studies are limited in what they can tell us about obesity and metabolic health. The Danish study selected which genes to measure based on their well-established connection to insulin. The second only looked at insulin-related genes and gene expression changes. Insulin is crucial for turning food into energy, but it’s not the only hormone in the game when it comes to eating behavior. Leptin, gherlin, and GLP-1 are all hormones and neurotransmitters that flood through the system pre-and post-mealtime.

And although this ‘fat but fit’ hypothesis is compelling, critics often suggest it ‘sends the wrong message.’ Tammy Chang and Caroline Richardson — both teach family medicine at the University of Michigan — wrote a particularly aggressive piece against ‘fat but fit’ at Raw Story:

Increasing physical activity without losing weight will not likely improve these patients’ lives. To improve their health and quality of life, it is important to exercise every day, eat healthy food and, most importantly, lose some weight.

They correctly point out, however, that even in a best-case scenario, the majority of metabolically healthy people with obesity are still susceptible to developing weight-related conditions. So if you have to have a boiler plate policy for public health purposes, ‘lose weight’ is still probably correct.

However both of these genetic studies indicate there is room for a more tailored approach. For 15 to 30 percent of people with obesity in this country, shouting at them about weight loss might not actually lead to better health outcomes.

A version of this article originally ran on the GLP on March 2, 2017.