Worried about low T? Treatments may be a costly placebo—and could even hurt you

This article or excerpt is included in the GLP’s daily curated selection of ideologically diverse news, opinion and analysis of biotechnology innovation.
For some men ‘the change’ makes them feel sluggish, easily fatigued and with reduced libido. For others, exercise gains don’t come as easily as they used to. All of these are symptoms of aging common to both sexes. But an entire industry has grown around convincing men that these changes are due to low testosterone levels — and that they can be prevented by taking hormone supplements. But studies haven’t reliably shown that testosterone therapy combats these symptoms. And a new set of studies echo earlier concerns that testosterone treatments might actually worsen heart disease.

Unsurprisingly the range in testosterone levels in young men varies wildly, from 300 to 950 ng/dL. Somewhere around 10 percent of boys and men do develop hypogonadism, a significant drop in testosterone production caused by damage to the testes or the biomechanisms that stimulate the testicles. Experts agree that hypogonadism should be treated with testosterone. 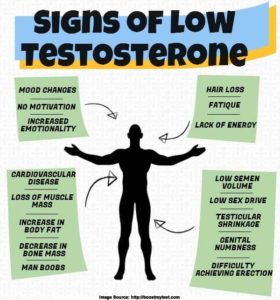 But the age-related testosterone decline known as ‘low T’ is more subtle. The “T Trials” are a set of large NIH-funded clinical studies that aimed to measure how testosterone therapy affected a slew of age-related health symptoms and how safe the treatment was. From Richard Hodes the Director of the National Institute of Aging:

Many of these men also have problems that could be related to low testosterone, including impaired cognition, anemia, cardiovascular disease, diminished sexual function, decreased mobility and fatigue. The T Trials were designed to determine if testosterone treatment might help alleviate these symptoms and conditions while monitoring for adverse effects.

Results from the trials were published in February 2017 in the Journal of the American Medical Association (JAMA). Testosterone therapy increased bone density in men, which is thought to protect people from fall-related injuries. The therapy didn’t have an affect on anemia. Testosterone-treated men had the same levels of red blood cells as the control group. Anemia is often related to feelings of fatigue. And there was no difference in cognitive functioning and memory tests when men used testosterone supplementation or didn’t.

But the study results that really made headlines was the discovery that the men who received testosterone had increased signs of heart disease. Doctors measured the thickness of plaque in the coronary artery before treatment and after a year. The men who used testosterone saw their coronary artery plaque increase about 47 cubic millimeters compared to the control group. From ARS Technica:

But for cardiovascular health, there was an effect—a bad one. Over the year, plaque buildup in the coronary artery—which is a risk factor for heart disease—increased in 73 men on testosterone compared with 65 on placebo. However, other studies have found mixed results on this. Longer, bigger trials will be needed to sort out the risks.

Testosterone treatment is also definitively linked to prostate cancer. In fact, many men with the cancer use androgen deprivation therapy, essentially giving themselves ‘low T’ to help slow tumor growth and prevent the formation of new ones.

Hodes, from the NIA, cautioned in a press release that testosterone treatments should be individualized to take into account personal risk factors. The evidence suggests it would be unwise for men with existing heart disease or prostate cancer to use testosterone therapy. The evidence on prostate cancer is strong enough that men at high risk for the cancer should probably stay away from it.

And while studies proving effectiveness and safety are likely to continue rolling in, there is argument among physicians about whether low T actually exists at all. From the Atlantic:

According to British Medical Journal (BMJ), the European Male Ageing Study has provided the best estimate of the prevalence of low T — defined as a combination of sexual symptoms and measured testosterone level — finding that only 0.1 percent of men in their forties, 0.6 percent in their fifties, 3.2 percent in their sixties, and 5.1 percent of men in their seventies would meet the criteria for the diagnosis.

And there are causality questions surrounding some of the conditions that have been linked to low T. Obesity for example, could cause the decline in testosterone rather than testosterone decline causing obesity. Also from the Atlantic: 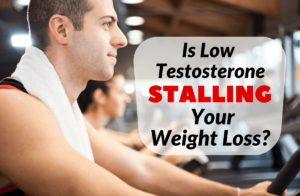 Dr. Kathleen Wyne [an endocrinologist said] although she has seen an increase in male patients asking about low testosterone, she hasn’t seen an actual increase in the condition itself. “I do see an increase in guys who are fatter,” she said. “The question is whether, if you lose 15 or 20 pounds, your testosterone would revert [to normal]. We know that even 15 pounds makes a huge difference to their level. Most of these guys actually have 50 pounds to lose.”

Androgen and other formulas of synthetic testosterone are available by physician prescription. But many people, especially within the body-building community, use high doses of the drug without physical supervision. These young men, without underlying testosterone deficiency sometimes report side effects like irritability and mood swings. One Florida man even used testosterone-induced-insanity as a defense strategy in the 2013 murder of his wife. It didn’t work. He was found guilty and is serving a life sentence.

Besides the cheesy advertisements and ridiculous television ads, there is a great deal to be skeptical about when it comes to treating low T. It’s a decision that should be discussed with the doctor. And for men with heart disease or a family history of prostate cancer, the known risks should probably outweigh the benefits. For everyone else, low T treatments may be just a costly placebo.

A version of this article previously ran on the GLP on April 26, 2017.

Meredith Knight is a science and health writer based in Austin, Texas. Follow her @meremereknight