This article or excerpt is included in the GLP’s daily curated selection of ideologically diverse news, opinion and analysis of biotechnology innovation.
The opening round of Democratic Party presidential debates threatens to fall short on science and is likely to be dominated by ideological talking points when it comes to food, farming and agricultural biotechnology. It could be the beginning of a year long attack on conventional agriculture.

At this early juncture in the primary election gauntlet, candidates are prone to ramping up their rhetoric to stand out in a crowded field and encourage donations. If recent statements from the candidates on conventional farming offer any indication, this election season will be no different. 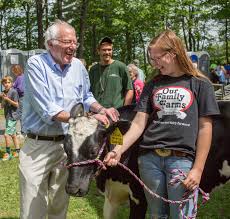 Vermont Senator Bernie Sanders, the most outspoken of the candidates on these issues, has not disappointed with his fiery rhetoric. Long a critic of what he claims is the ‘corporate dominance of agriculture,’ Sanders has avoided nuanced discussions about the relative merits of organic vs. conventional agriculture, for example, and instead has attacked Monsanto, using it as a proxy for conventional agriculture.

Monsanto has long been an easy target, mostly because the company was the leader in developing commodity GMO row crops such as herbicide-tolerant and pest-resistant corn, soybean and cotton. Commodity crops are reviled by many left-leaning activists who favor organic food and argue that agricultural biotechnology promotes ‘industrial farming.’

Now owned by Bayer, Monsanto has more recently been pilloried as the largest manufacturer of the herbicide glyphosate (known as Roundup in its patented formulation), which is often paired with biotech crops. Bayer recently lost three high-profile court cases in which juries concluded that glyphosate caused cancer in applicators. Many scientists have criticized the rulings as contrary to the evidence and the company is currently appealing the judgements.

On his campaign website, in the section Revitalizing Rural America, Sanders launched into a vituperative condemnation of “corporate domination of agriculture.”

“We cannot continue to allow Monsanto to control 80% of U.S. corn and more than 90% of U.S. soybean seed patents,” the site claimed. Like many Democratic activists, Sanders believes that the root of all evil in the farm belt is ‘Big Ag’:

We need to address corporate consolidation and control of our food and agriculture system – all the way up the food chain from seed companies; fruit, vegetable and grain growers; food processors; food distributors; and grocery chains. When markets become too concentrated, they begin to act more like monopolies than free markets.

Sanders has proposed a moratorium on agribusiness mergers, specifically blasting the Bayer takeover of Monsanto. In the process, he has propagated a number of half-truths. For example, the site claimed: “After the Bay-Monsanto merger, the two largest conglomerates now control 78% of the corn seed market.”

Are those claims factual? The impact of mergers on specific markets is complicated and doesn’t lend itself well to simple, emotional campaign messaging, experts say. Data from 2017 show that Monsanto was not even the largest American corn seed manufacturer. DuPont Pioneer held 34.7 percent of the market; Monsanto sold 33 percent; Bayer was not a significant player. The merger hasn’t changed the total sales or market shares much.

A tireless skeptic of powerful corporations, Senator Elizabeth Warren also has sharply criticized what she also calls“Big Ag”. Writing on Facebook on Februrary 4:

By rubber-stamping the Bayer-Monsanto merger, the Justice Department is handing control over one quarter of the world’s seeds and pesticides market to one ginormous agribusiness. That’s bad for farmers, bad for our food supply, and bad for consumers everywhere.

Are those claims accurate? Did US antitrust regulators give the merger little thought? Did the the merger deal produce a company as large as Warren claimed? The Poynter Institute’s Politifact was not impressed by the senator’s analysis:

Warren said the Justice Department “rubber stamped” a deal that cleared the way for one firm to control one-fourth of the seeds and pesticide market worldwide.

The regulatory process took many months and Bayer had to sell substantial business lines to win approval. “Rubber-stamped” gives the wrong impression that it happened without scrutiny or conditions.

The market share number is generally correct. However, Bayer plays a commanding role in the sale of some seeds, such as corn and soybeans, and not in others. And the experts we reached described the limits of control, even when one or two firms dominate a market.

We rate this claim Half True.

Many Democratic candidates view the organic food market as the preferred alternative to “Big Ag.” Sanders “virtue signals” his supporters, sprinkling his rhetoric with populist phrases like “regenerative” and “sustainable” agriculture, terms used by green marketers and environmental groups to promote organic and non-GMO farming.

Not surprisingly, Sanders has never been a fan of genetic engineering of food, and was a vocal proponent of mandatory GMO labeling (and an equally vocal opponent of the current National Bioengineered Food Disclosure Standard (NBFDS), enacted in 2016, which eschewed the loaded term “GMO” for the more science-based “bioengineered”).

“Nine out of 10 Americans consistently report they want the right to know if their food is produced with genetic engineering, the same right held by consumers in 64 other countries,” Gabbard wrote in 2017 to USDA chief Sonny Perdue, repeating slogans popularized by Hirshberg and others in the organic industry. The Hawaii Democrat has also called for a ban on Roundup:

I’ve said it before, I’ll keep saying it: ban roundup! It’s long past time we stopped relying on corrupt corporations with a profit incentive to fund science telling us their chemicals are “safe.” Victims shouldn’t have to go to trial to get the truth. https://t.co/eUxAmuvSJb

Although he doesn’t openly bash conventional farming like Sanders, Warren, and Gabbard, South Bend, Indiana mayor Pete Buttigieg has embraced its sharpest critics. He has cozied up to Stonyfield Organic, the dairy and yogurt company that finances Just Label It and other activist efforts sharply critical of conventional agriculture and crop biotechnology.

Standing next to Stonyfield CEO Gary Hirshberg during an April speech at the company’s headquarters, Buttigieg declared, “It means a lot to see a company in the private sector that is run according to values”: pic.twitter.com/DcsHAat9c3

Not all of the candidates take positions critical of conventional agriculture. Anti-GMO activists have criticized Senator Amy Klobuchar for voting for the Safe and Accurate Food Labeling Act—what activists called the “DARK Act”–which limited states such as Vermont to go their own way on GMO labeling, and set a national ‘bioenginered’ label. Former Congressman Beta O’Rourke also  against the SAFE Act.

Recent data show what many farmers and non-political observers have noted about the seed industry: While the newly-constituted Bayer-Monsanto and Dow-DuPont (not mentioned by Sanders, Warren and other Democrats) corporations are indeed very large, numerous seed companies, including regional firms, offer products farmers want, and growers are free to buy whatever seeds best meet their needs.

So, is agricultural consolidation always bad, as Sanders, Warren and others seem to suggest? The short answer is that’s too simplistic. Wisconsin crop consultant Brion Hackbarth noted last year on AgWeb that the debate over brand consolidation mistakenly equates size with control, and challenges claims that the current structure will negatively impact farming practices:

Between Bayer/Monsanto and Pioneer, they control about 70% of the market. The rest is distributed by other companies for instance ag reliant has 7% of the market share total, yet has extremely great products. What is not told in this is that we as agronomist, CCA’s, and extension, are doing everything we can to inform the public, producers etc., how to grow and manage these products where we limit resistance. These companies have a slug of technology coming down the pipeline. If producers, co-ops etc. use good judgement there will few if any concerns about drift, resistance, etc. Good scouting. And good management will prevail as always.

Farmers say they have seed buying choices. And as US Department of Agriculture economic research scientists James McDonald noted in an analysis of the recent mergers in the agricultural industry, market concentration does not easily equate to market power.

In the 1960s and 1970s, antitrust agencies focused heavily on concentration as a sufficient indicator of market power. Policy has since changed sharply. While concentration still matters, it alone is no longer considered to be a sufficient indicator of market power. Other factors, such as the ease of rival entry and the ease with buyers can switch their purchases among sellers, now matter as well.

The Big Ag stereotyping by the leading Democratic candidates has perpetuated a familiar political myth that most American farmers are now agribusinesses. According to the latest USDA figures, small farms (those earning less than $350,000 in annual revenues) currently comprise 89 percent of the US market. In 2014, 61 percent of farm land was operated by the owner.

Even large farms are overwhelmingly family-owned—94 percent of farms with annual sales over $1 million are not controlled by large corporations. Cattle feeding, fruit and nuts, and poultry are a different story, however; corporate ownership is more concentrated in those market segments.

Don’t expect much nuance when discussing modern agriculture on the debate stage this week. Election rhetoric is notorious for its ‘on-message’ simplicity and emotional appeal to voters. In that regard, Sanders, Warren and perhaps others are unlikely to disappoint.

Andrew Porterfield is a writer and editor, and has worked with numerous academic institutions, companies and non-profits in the life sciences. Follow him on Twitter @AMPorterfield