This article or excerpt is included in the GLP’s daily curated selection of ideologically diverse news, opinion and analysis of biotechnology innovation.
In genetics, what matters most, the chicken or the egg?

Sure, it’s a play on that old chestnut, ‘what came first …?’, but chickens (and their eggs) provide a surprisingly down-to-earth illustration of the profound implications of the modern genetic revolution.

Why chickens? First, because these birds are so ubiquitous – accounting for well over two thirds of all terrestrial farm animals and out-numbering the planet’s 7.5 billion human beings more than three to one. Second, as a result of these animals’ immense (though often under-appreciated) importance in modern food production, their genetics have been thoroughly scrutinized – the chicken genome, for example, was the first domestic species’ to be sequenced, only shortly after that of us mere human beings. And, finally, a genetic perspective on this avian lineage illuminates many of the more philosophical aspects of Darwin’s explanation for the living world, including its stark – and, to many people, repugnant – materialism.

Let’s begin with Darwinism. At the simple level of the ‘struggle for existence’, chickens are clear winners. So what if the ‘survival of the fittest’ in this case mostly means miserably short lives in squalid factory-farm cages? That’s just human emotion coloring our perceptions. Indeed, from a Neo-Darwinian gene’s-eye view of the world, us humans can be seen simply as a chicken’s way of making more chickens.

Evolution is, after all, amoral – there is no standard of ‘good’ or ‘bad’ beyond the blunt dictum: If it works, it persists; if it doesn’t, it disappears. And while Darwin himself saw “grandeur in this view of life”, it is hardly surprising that the more spiritually-inclined regarded his theory as “a dogma of darkness and death”.

And modern chickens capture this grandeur/darkness dilemma beautifully. On the one hand, for example, it is truly staggering how – through simple Darwinian artificial selection – the weight of the average broiler chicken has ballooned within the last half century, quadrupling the size of yesteryear’s scrawny farmyard fowl from under 1kg (2.2lb) to over 4kg (8.8lb). On the other hand, though,  ‘staggering’ and ‘ballooned’ are here to be taken quite literally. The Dutch term ‘plofkip’ (‘exploded chicken’) aptly describing how these poor creatures grow so rapidly that they are unable to bear their own weight. 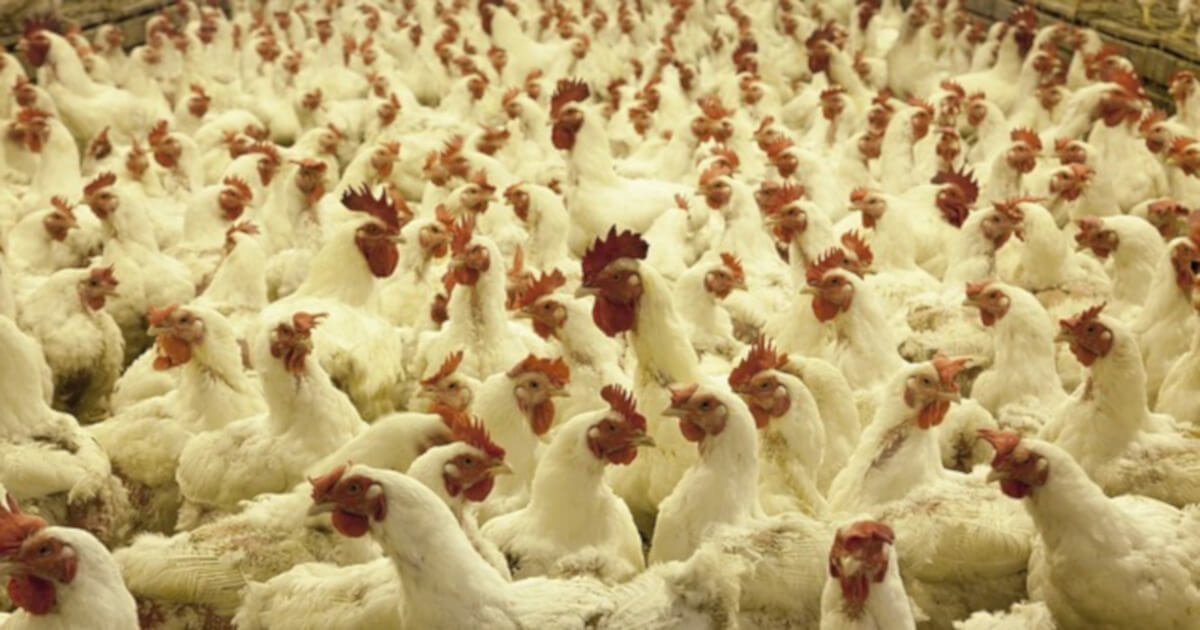 Compared to their ‘natural’ wild ancestors, plofkip-like chickens are ‘unnatural’ monstrosities, both physically and psychologically – sentient beings motivated simply to eat, eat, eat. (Cannibalism, by the way, is also a ‘dark’ and unnatural-seeming feature of factory-farmed chicken behaviour.)

Here, though, we could ask what ‘natural’ or ‘unnatural’ actually mean – an important question, given that much of the opposition to modern agricultural practices (including anti-GMO sentiment) is premised on this very distinction.

For example, a common argument about the unnaturalness of today’s overblown broiler chickens is that these animals could not survive without the massively complex edifice of an artificially-created environment (i.e., the crowded sheds where they live, eat and fatten for slaughter).

Yet is this more than a scaled up version of the relationship between, say, mitochondria (originally independently-existing bacteria) and the cells in which they now reside? In both instances, chickens/mitochondria benefit by being buffered from the outside environment in return for providing the human/cell with energy (directly in chemical form in the case of mitochondria, and indirectly as meat in the case of chickens).

Admittedly, the mitochondria/cell symbiosis has evolved into a win for both parties, unlike the human/poultry relationship where the costs and benefits for chickens is less clear-cut. Given, though, that the total mass of chickens now exceeds that of all other bird species combined, it is hard to argue that this particular species is the losing partner.

And that is the point; from a gene’s eye perspective, it appears meaningless to distinguish the ‘natural’ perpetuation of mitochondrial genes from the ‘unnatural’ continuance of broiler chicken DNA.

The concept of natural/unnatural similarly dissolves with yet another example from the living world – that of the Macrotermes termite queen, which upon mating swells massively into a helpless and bloated egg-laying machine (in some species producing tens of millions of eggs per year for over a decade). What is more, these queens live in ‘artificially’ constructed mounds – huge buffered environments – outside of which such a life would be unviable.

The question here, then, is what principles should apply to differentiate the termite queen’s ‘natural’ physical changes within a teeming termite mound from the broiler chicken’s ‘unnatural’ development in an over-crowded coop? (And likewise with the prodigious egg-laying capacities of both termite queens and battery hens.)

It is worth noting here that the broilers’ propensity to put on weight and the battery hens’ year-round egg-production – that is, the observable changes eagerly seized upon by human breeders – are now known to be caused by specific genetic mutations. Yet this merely mirrors the selective processes – based on the underlying influence of genes – that have created natural monstrosities like the obscenely swollen and fecund termite queen.

What does this then suggest about the natural/unnatural distinction at the heart of opposition to, say, the factory farming of chickens? Upon closer inspection, this collapses into little more than the belief that what is unnatural is human-induced changes to the living world. But surely then everything about modern human beings is unnatural: clothing, shelters, tools, fire – all the way back to our supposedly ‘natural’ arboreal primate ancestors.

Unfortunately, whether coherent or not, such a belief appears to lead us nowhere.

A much stronger argument against factory-farmed poultry – or indeed any animals – is not that it is unnatural, but that it is harmful. Meat production and consumption has detrimental impacts on both the environment and on human health (with the overuse of antibiotics in poultry farming also linked to an alarming increase in antibiotic resistance in certain dangerous pathogens). Perhaps more importantly, intensive animal husbandry is also intensively cruel – chickens are after all sentient beings, capable of suffering in the cramped conditions of modern factory farms.

Modern molecular biology, however, offers potential solutions to the harmful effects of factory farming – say, through genetically engineering disease-resistant poultry or manipulating the psychology of chickens to allow them to better cope with overcrowding. Indeed, it is but one step to create non-sentient chickens that simply grow or lay without the capacity to suffer pain altogether. As Miracle Mike – a chicken that lived for 18 months without a head – demonstrates, such ‘braindead’ chickens are well within the realms of possibility.

True, this sounds dystopian – but how much more dystopian is the current situation, in which billions upon billions of sentient chickens live painful, squalid lives simply so human beings can enjoy consuming their flesh or that of their eggs?

Of course, a further and more humane move might be to use our recently acquired genetic understanding of animal growth to engineer synthetic alternatives – as indeed is underway with the advent of lab-grown  or cultured meats. In a stroke, this could mitigate many of the environmental and the animal welfare costs of factory farming.

And even if genetically engineered substitutes for chicken meat, say, are not necessarily a cure-all for the manifold problems of modern agriculture, this does at least illustrate some of the wooliness of anti-GMO thinking, including its ill-conceived notion of ‘genetic modification’.

The cruel monstrosity of plofkip-esque chickens, for instance, is indeed the result of genetic modification, but of the conventional selective breeding kind that, bizarrely, does not receive the same level of opprobrium as targeted genetic engineering.

It is a strange situation indeed in which those who are most critical of the harms of industrial agriculture – often on admirable ethical grounds – are also those most opposed to the potential solutions made possible through modern genetic techniques. (Staying with chickens, targeted genetic manipulation of their egg-laying capacities also promises benefits ranging from the cheap and efficient production of medicines to the ‘genetic rescue’ of endangered or even extinct bird species.)

Here though, having merely pecked at the surface of the feather-ruffling issues raised by farmyard fowl, it is time to chicken out of further discussion. Suffice to say, recent genetic analysis has confirmed Charles Darwin’s hunch that the chicken’s wild progenitor is the red junglefowl, Gallus gallus, of tropical Asia – an ordinary bird that raises extraordinary questions about the nature of life itself.