Long-term partnership or quickie hookup: Can evolution explain why a woman chooses one over the other?

This article or excerpt is included in the GLP’s daily curated selection of ideologically diverse news, opinion and analysis of biotechnology innovation.
After a certain age, most adults settle into long-term partnerships that remain relatively stable for years, even a lifetime. But it’s not uncommon, either, for people to have briefer, less committed relationships: hookups, “friends with benefits,” extramarital affairs and the like.

This poses something of a problem for evolutionary psychologists, who seek to explain much of human behavior as inherited adaptations that have arisen over tens of thousands of years. It’s easy to find an adaptive reason why men might seek short-term sexual relationships. After all, a promiscuous man could potentially sire dozens, even hundreds of children, thus contributing more of his genes to the next generation — a win, in evolutionary terms. But the asymmetries of pregnancy and lactation mean a woman can’t have hundreds of children, so she gains little benefit, evolutionarily speaking, from sowing wild oats. Why, then, should women engage in short-term dalliances at all?

One possibility, of course, is that there is no evolutionary goal in play, that women are merely enjoying the benefits of our modern, relatively egalitarian, contraceptive-equipped society. There is likely to be some merit in that explanation. Simply talking about human behavior as evolutionary psychologists do — as though we were just another animal piloted by instinct — can draw ire from some social scientists and members of the general public, who counter that biology is not destiny, and that people control their own behavior. But evolutionary psychologists wonder whether there might be other forces operating as well, with women’s short-term mate choices representing an active strategy with specific evolutionary goals. Sorting this out has emerged as one of the hottest current research topics in the field of human mating behavior.

The standard evolutionary explanation for women’s short-term relationships, at least for those who already have a long-term partner, is that an affair on the side could be a good strategy because it provides an opportunity to mate with someone more physically attractive than her regular partner, that dependable, caring guy. “Those sexy men are likely to have more partners — and, historically, more children — than the good dads,” says Sarah Hill, an evolutionary psychologist at Texas Christian University in Fort Worth. A woman who acquires those sexy genes for her sons, then, should leave more grandchildren.

To test this idea, researchers have looked to see if women have a stronger preference for attractive men as affair partners during their fertile period each month, the only time they could actually acquire those sexy genes for their offspring. So far, the evidence is equivocal: Some studies show this “ovulatory shift” in preference, while others do not. “It leads me to believe there’s probably something there,” says Hill. “It’s just that it’s going to be more nuanced.” For example, an analysis by Steven Gangestad, an evolutionary psychologist at the University of New Mexico in Albuquerque, and colleagues found in an as-yet unpublished study that the predicted ovulatory shift occurred only for women in a long-term relationship, not for unpaired women. If this result stands, it might suggest that unpaired women are seeking something other than sexy genes through their short-term mating behavior.

A related possibility is that women are not necessarily looking for better genes than their long-term partner offers, merely different ones. This strategy would make sense in uncertain times, when it’s hard to predict what kind of genes will give offspring the best chance for success. In those circumstances, a woman’s best strategy might be to hedge her bets and seek a variety of different fathers for her children, in the hope that one will end up with the right stuff. (Genes are only one of many factors that contribute to a child’s eventual success in life, of course. But if they matter at all, bet-hedging in unstable times should pay off.)

This idea, too, finds some support. For example, Hill and her colleagues showed some women a presentation about the risk of a rise in disease outbreaks in the future, an evolutionarily familiar threat that genetic diversity can help counter; other women saw a presentation about economic recession, designed to represent a threat human ancestors would not have evolved to deal with. Sure enough, the women who heard about disease expressed an interest in a greater range of dating partners shortly thereafter. “Those women wanted more variety,” says Hill. “This is consistent with what you’d expect. The Atlantic salmon does exactly the same thing.” (In high-disease environments, female salmon prefer to spawn with multiple males.) 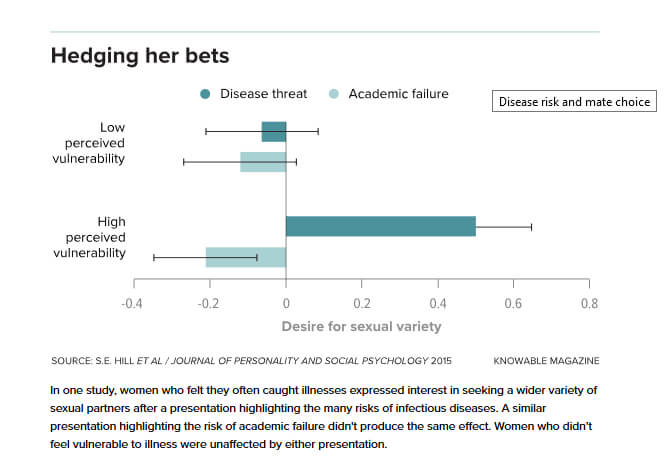 But David Buss, an evolutionary psychologist at the University of Texas in Austin, and one of the pioneers of work on mating strategies, thinks women must be after more than just genes. After all, women do not have short-term relationships only during their fertile period, when their partner’s genes are relevant. Moreover, a 1992 study showed that 79 percent of women end up falling in love with their affair partner. (That’s true for only about a third of men.) “This is exactly the opposite of what you’d predict if all you wanted was good genes. If you’re just getting genes from your affair partner, becoming emotionally involved is a disastrous thing to do,” says Buss.

Instead, Buss suggests that women may be using short-term affairs as a way of searching for a better mate. As evidence, he points to that same 1992 study of affairs, which also showed that women, much more than men, tend to start affairs when they are dissatisfied with their current mate. Moreover, women tend not to lower their standards in choosing an affair partner, preferring men who are smart, ambitious and dependable — the same qualities they seek in a long-term mate. Women not currently in a long-term relationship might similarly use short-term liaisons as a way to test out potential long-term partners, Buss says.

Some critics, in fact, question whether women have a separate short-term mating strategy at all. Instead, they suggest, all efforts at pair-bonding are basically similar, whether the relationship has a long tenure or a short one. This implies that most short-term relationships are simply ones that never reach the threshold of attachment to become long-term, says Paul Eastwick, a psychologist at the University of California, Davis. Eastwick and his colleagues asked several hundred volunteers to recall their most recent short-term and long-term relationships and check off, from a list, the sequence of stages that each relationship passed through, from first becoming aware of the other to dating, sex and then marriage. The volunteers also rated their level of romantic interest at each of these milestone events.

Both short- and long-term relationships passed through nearly identical trajectories, with very similar levels of romantic interest, in their early days, the researchers found. The short-term relationships, of course, passed through fewer events in total. In other words, all relationships start alike, and only begin to differentiate as the couple get to know each other. “People often don’t have a sense of whether they want to have sex a few times and then say good-bye, or whether this is somebody they might want to be with long-term,” says Eastwick. (A few relationships, such as one-night stands with strangers, are unambiguously short-term, he concedes. Only a tiny fraction — about 3 percent — of his volunteers described such relationships, though other studies put that number much higher, at nearly 10 percent of people.)

Eastwick thinks that women prioritize their partner’s physical attractiveness early in a relationship, because that is what is immediately noticeable. As the couple grows closer, though, their priorities shift toward traits like caring, humor and dependability.

Of course, these explanations for women’s short-term mating behavior are not mutually exclusive, and women could have other reasons, as well, for having a brief fling. “Sex is used for a lot of different things, many of which have nothing to do with reproduction,” says Hill.

Others point out the limits of thinking about human mating strategies as monolithic and unchanging over the ages. In particular, human behavior has evolved to be highly flexible, allowing our ancestors to adapt quickly to changing environmental conditions, notes Alice Eagly, a social psychologist at Northwestern University. “That is part of our success as a species, that we live under varied circumstances, so we invent ways of dealing with it,” she says. “We choose a mate thinking, ‘What’s going to work for the life I think I’m going to have?’ We’re inventive about that, and our choices change.”

One of the big questions for the future, says Buss, is how our evolved mating strategies play out in the modern world, where contraceptives reduce women’s risk of pregnancy and economic independence at least partly frees women from needing a partner’s resources for child-rearing. Internet dating, which brings millions of potential mates within reach of our phones, may be an even bigger wild card. Does the size of this pool of mates make people pickier? No one knows yet. Stay tuned.

Bob Holmes is a science writer based in Edmonton, Canada

A version of this article was originally published on Knowable’s website as “Sex strategies of the evolutionary kind” and has been republished here with permission.