This article or excerpt is included in the GLP’s daily curated selection of ideologically diverse news, opinion and analysis of biotechnology innovation.
Suspect for State’s Case Number 1500 sat in his cell, facing unending days of solitary confinement and interrogation, accused of spying “for foreign intelligence services.” Alone, seized and imprisoned, he worried about his work, the seeds collected from all over the world, his legacy, his institute. Suddenly he realized how large a burden he had borne, for in his own words and tempo, there was not a moment to spare. Would all this be cast aside, his reputation disgraced among his far-away colleagues?  Or would the good work be rediscovered, like the laws of Mendel?

It was August 1942 and the Soviet-financed expedition he led just reached the town of Chernovtsy while collecting plant germplasm from the western regions of the Ukraine. Upon his return to town, he found several men in cars insisting he come to place an urgent phone call to Moscow. Unquestioning he went. Only later did he realize their orders were instead to isolate and imprison him.

Eventually, Nikolai I. Vavilov, director of the All-Union Institute of Plant Industry in Leningrad, was sent to Saratov prison, accused of being a traitor. He was jailed in such horrendous conditions and deprivations that he soon died of starvation. A man who dedicated his life to bettering people’s lives through agricultural research was dead on January 26th, 1943 at the age of 55.

A test of relevance

Seventy-six years later it seems fair to address Vavilov’s fears – has his work after all been lost or forgotten? Or, do we recognize Vavilov’s contributions as being “to the greatest benefit of humankind,” as prescribed by Alfred Nobel’s guiding sentiment for the Nobel Prize? And, if the later, what signs are there of his ideas, works and teachings in our time? The answer lies in as much with who Vavilov was as with what he did. Examples of both follow. 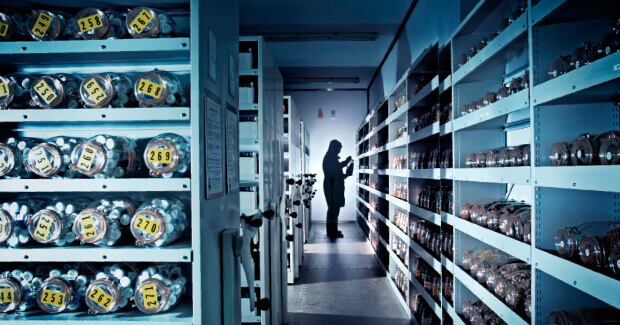 Vavilov realized that genetic diversity in agriculture was concentrated in specific regions of the world, and that traditional farming fields were full of such diversity due to the variability in agro-climatic conditions with which farmers contend. Based on his findings, Vavilov conceptualized, “eight ancient main centers of origin of world agriculture or, more exactly, of eight independent regions where various plants were first cultivated”. While this vision of centers underwent refinement (even by Vavilov himself), and new interpretations emerged, it remains a conceptual starting point for understanding crop genetic diversity and breeding.

A second example of Vavilov’s prescience was his recognition of and concern with what has been named genetic erosion.  Concerns with the loss of genetic diversity over time, as seen in the fields travelled by Vavilov, are currently echoed by Crop Trust: “Crop diversity is essential for life on earth. It underpins nearly everything we eat and drink. But it’s rapidly disappearing,”.

This thought, particularly the last line, parallels Vavilov’s concerns with the replacement of traditional famer crop diversity with new varieties. Vavilov not only recognized this fate, but ensured that by the 1920s, seed banking would help minimize these losses.

By 1921, at age 34, having seen Vavilov’s potential, Vladimir Lenin appointed him director of the Bureau of Applied Botany, from which it was transformed into the All-Union Institute of Plant Industry. He kept this position for almost 20 years with the institutional transitions he implemented lasting until today. But Vavilov not only transformed institutions, he transformed the people closest to him; scientists not afraid to set and keep lofty goals, even during the famines and battles of the Russian revolution or World War II.

A strong loyalty developed among his colleagues such that some gave their lives defending the genebank as if Vavilov himself were there during the siege of Leningrad. This “saved seed” formed the foundation of what became the genebank – now called VIR (N. I. Vavilov Institute of Plant Genetic Resources).

Vavilov’s large-scale expeditions for plant collection visited more than 50 countries, with collected seed helping to build one of the most extensive collections of plant genetic resources ever conserved. As the collection grew, ensuring a safe “depository” became essential. If not, all of the seed collected would be at risk. Thousands of seed samples were coming in – far too many to be recorded, conserved and protected in a haphazard manner. Yet, in the early 1920s, there was no “tried and tested” model for safely conserving seeds ex situ, especially seed representing such a vast number of plants and environments.

But for Vavilov, there was an equally pressing reason why safely depositing “seed in the bank” was essential. As mentioned above, such deposits “offset” what the loss of diversity from uptake of modern varieties. All conservation approaches have their limits, strengths and weaknesses, including ex situ genebanks. Nonetheless, the importance, growth and utility of genebanks have achieved world-wide recognition ever since the pioneering work to build and maintain the type of genebank envisioned by Vavilov in the 1920s.

Related article:  Tick tock, circadian clock research wins Nobel Prize—and why it may help us sleep and travel to Mars

Genebanks now operate at the local, national, regional, international and global level. If Vavilov’s “genebank gambol” failed, if the seed became inviable, if seed exchange collapsed, if maintenance funds were exhausted, or if Russia’s starving population had been able to consume the seed instead of conserve, if the employees proved unsuitable, then perhaps subsequent success of ex situ banks would not have occurred.

Political “purging” was always part of Russian history, but those ordered by Stalin reached new heights in fatalities. With Vavilov, Stalin became personally involved, voicing frustration with the lack of rapidly demonstrable yield increases after all of Vavilov’s work and international travel. Eventually Stalin began to champion a man of peasant upbringing and local education, quite the opposite of Vavilov. This was Trofim Lysenko, a Russian agronomist who took great opposition to modern genetic improvement of plants and Westernized agriculture.

Eventually an open debate was organized regarding genetic improvement, with Lysenko heavily favored by Stalin. Not long after this meeting, Stalin took additional steps to ensure the rise of Lysenko and the victimizing of Vavilov. He had the great geneticist imprisoned and sentenced to death while promoting Lysenko and Lysenkoism, which until 1949 remained a commanding part of official Soviet genetic science. Stalin’s, and hence the Soviet party’s endorsement of Lysenko, left no option but to end Vavilov’s career and issue a guilty verdict for treason.

Then came 1955 and the administration of Nikita Khrushchev. Vavilov was officially rehabilitated. His name could be spoken again and his scientific record re-established. As suddenly as Vavilov vanished, back he came to life. Following rehabilitation, monuments were erected, institutes renamed, and official postal commemoratives issued marked the anniversary of his birth. The survival and growth of the very genebank Vavilov established is another testament to the worthiness of such commemoration, which brings us to the final comparisons. 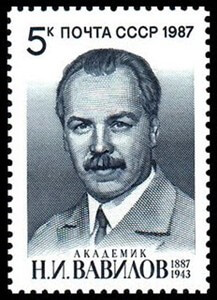 Vavilov’s prescience regarding genebanks can be tested by comparing the scale and timeliness of the Vavilov genebank to data collected from genebanks 50 years after 1940s, when the St. Petersburg (as the city is named today) site was fully operational, having 250,000 seed accessions collected from over 50 countries, a trained staff, and facilities for regeneration and testing.

Data from prior work showed the U.S. National Plant Germplasm System held 148,000 accessions by 1991, with the US National Seed Storage Laboratory not opening until 1958. A second comparison comes from the first of the international agricultural research centers, CIMMYT, which opened in 1966, and held 103,349 accessions.

At that time, larger national genetic resource programs in the developing world were few, but in 1986, the NBPGR in India opened its genebank, housing some 340,000 accessions. And more recently, China opened its national facility in 2013, now holding around 420,000 accessions. From these comparisons it is clear that what Vavilov conceived and implemented some fifty years before others has been replicated, from developed countries, to international research centers and lastly, to large developing countries.

However, while the number of genebanks around the world has grown, countries and institutions other than Russia have not commemorated the person who had the courage to foresee and implement such facilities.

Would such commitment and sacrifice, “to the greatest benefit of humankind,” as said by Nobel, be broadly recognized by the world community should Vavilov be alive? Would such recognition ensure that Vavilov’s reputation has not been damaged after all? If so, might other worthy candidates’ applications be put on hold such that Vavilov be considered for the World Food Prize, making an exception to award the prize posthumously, and in so doing, formally review the benefits to humanity that still accrue from his work?

Joel I. Cohen has a Ph.D. in Plant and Soil Sciences and worked with the International Agricultural Research System for twenty years in plant improvement and genetic resource policy and research for developing countries. He currently works in science education at various educational organizations. His publications and research can be found on Research Gate, the web or by email