This article or excerpt is included in the GLP’s daily curated selection of ideologically diverse news, opinion and analysis of biotechnology innovation.
Carole Kushnir of California took the 23andMe personal genome test to satisfy her curiosity, but the test revealed much more than she bargained for. Her results indicated that she had an inherited mutation on the BRCA2 gene, which greatly heightened her risk of developing breast and ovarian cancers.

Shortly after receiving her 23andMe test results, Kushnir, 73, made an appointment with a cancer specialist. She decided to have her ovaries removed as a precaution. Instead of getting a preventive double mastectomy as Angelina Jolie and others with BRCA mutations have done, Kushnir opted for more frequent breast cancer monitoring—at least for the time being. She also encouraged family members to get their personal genomes tested. Several, including one of her sons, discovered they had similar genetic mutations and went on to receive various forms of treatment.

Men with BRCA1 or BRCA2 mutations have a higher risk of developing prostate cancer (as well as breast cancer), and both men and women with the mutations have an increased risk of pancreatic cancer. Since the BRCA1 and BRCA2 genes code for tumor suppressor proteins, aberrant forms of these genes are implicated in many cancers.

Karen Durrett wanted to use the 23andMe personal genome test to determine the cause of some minor health issues she’d been experiencing, and to find out if she was at risk for developing illnesses that run in her family. Instead, the Georgia woman found out the man she had called “Dad” for over 50 years was not her real father. She later was able to track down her birth father and two half siblings, and come to terms with her new reality. 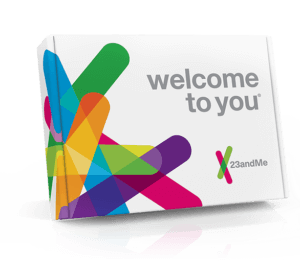 Durrett’s personal genome story didn’t end there, however. Inherited mutations in the BRCA genes were also revealed by her 23andMe test results, which prompted a visit to the doctor. A biopsy indicated that Durrett, 57, had cancer rapidly developing in her mammary glands. Doctors said that if the cancer had been caught just six months later, it likely would have metastasized. After two surgeries and several rounds of radiation, she is free of breast cancer.

“If I’d waited, it would have gone into the tissue,” Durrett says. “That’s my reality. There are a lot of people who have fascinating DNA stories and they just don’t know it yet.”

Stories like those of Kushnir and Durrett are becoming increasingly common as more people choose direct-to-consumer (DTC) personal genome testing over doctor-led versions. The consumer versions are often cheaper, cover a broader array of conditions and occasionally include ancestral information. They also do not require appointments or referrals to complete, and help patients maintain their autonomy as it relates to personal health—according to Katherine Wasson, assistant professor at the Neiswanger Institute for Bioethics, Health Sciences Division, Loyola University Chicago.

Consumer tests can be purchased online for around $100, down from $1,500-$2,500 in 2009. The popularity of the tests suggests that individuals are interested in taking proactive and preventive approaches to disease risk. But what are some top concerns when it comes to using direct-to-consumer genetic tests for these purposes?

Personal genome tests, like 23andMe and AncestryDNA, look for common genetic variants (aka mutations) that can indicate one’s risk for developing a wide range of disorders and aberrant drug responses. They cannot, however, test for very rare or de novo mutations. The tests can also provide less critical information, such as smoking behavior (if you smoke, are you likely to smoke more?), how likely you are to experience male pattern baldness, whether or not you have the genes that code for fast-twitch muscle fibers (the kind that many world-class sprinters and endurance athletes have), or if you lack the Duffy antigen and are thus resistant to P. vivax malaria infection.

Disorders commonly covered by direct-to-consumer genetic tests include celiac disease, Parkinson’s disease, Alzheimer’s disease, cystic fibrosis, Tay-Sachs disease, hereditary fructose intolerance, and sickle cell anemia. They also can point out variants that can cause drug responses, including pseudocholinesterase deficiency — caused by a variant of the BCHE gene — which creates a particularly high risk of sudden cardiac arrest when using cocaine. That said, simply having a harmful variant of this or any other gene does not necessarily mean that the individual will have the condition in question. In other words, genotype (one’s underlying genetic makeup) does not always predict phenotype (observable characteristics or traits in an organism). Mediating influences can include other genetic and epigenetic factors, an individual’s environment, lifestyle and diet, and so on.

Mistaking genetic results for medical diagnoses is one of the most frequent errors that occurs when interpreting consumer test results. This mistake can be avoided if one possesses a substantial understanding of genetics. But the typical consumer lacks the level of education needed to correctly interpret test results. This can lead to unnecessary fears or concerns, prompting people to excessively alter their diets and lifestyles in an effort to combat diseases that aren’t actually in the cards for them. On the other hand, there are those who fail to recognize areas of genuine concern, and thus do not take steps toward potentially lifesaving interventions.

Most consumer genetic tests claim around 99 percent accuracy. And research indicates that for the more serious hereditary diseases, a significant proportion of consumers end up discussing worrisome results with their physicians. This, however, brings up another area of concern: The majority of primary care physicians also lack the level of expertise necessary to correctly and thoroughly interpret their patients’ genomic test results. According to an extensive review conducted by Loredana Covolo, of the Unit of Hygiene, Epidemiology and Public Health, University of Brescia, Italy, and her team, the presence of a primary care physician during the interpretation of consumer test results does not guarantee adequate, or even accurate, information for the patient.

Covolo’s team reported that clinicians interviewed in recent studies were “enthusiastic about the potential of genetic tests to enhance the personalized, preventive, and wellness orientations of their clinical practices.” At the same time, many of these clinicians felt it was unacceptable to provide genetic testing without patients receiving follow-up genetic counseling. Unless certified in genetic counseling themselves, most physicians feel ill-equipped to handle the influx of patients who arrive with test results in hand. Some companies, like Color Genomics, have responded to this concern by offering one genetic counseling session with each genetic test kit ordered. 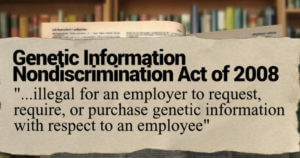 Another major area of concern for genetic testing is the privacy of the results, as related to genetic discrimination. The Genetic Information Nondiscrimination Act of 2008 (GINA) “prohibits discrimination in health coverage and employment based on genetic information.” Signed by President George W. Bush in 2008, GINA “prohibits health insurers or health plan administrators from requesting or requiring genetic information of an individual or the individual’s family members, or using it for decisions regarding coverage, rates, or pre-existing conditions,” according to the Department of Health and Human Services. GINA also “prohibits most employers from using genetic information for hiring, firing, or promotion decisions, and for any decisions regarding terms of employment.”

The argument can be made, however, that GINA is not adequate when it comes to thoroughly protecting Americans from genetic discrimination. Several individuals have been denied life insurance coverage based on their genetic test results, including Jennifer Marie whose 2015 life insurance application was denied due to her “positive BRCA1 gene.” And the law does not apply to long-term care and disability insurance. More comprehensive genetic nondiscrimination laws exist in some states.

“Knowledge is power,” Laura Esserman, a surgeon and breast cancer oncology specialist at the University of California, San Francisco, told Fast Company in reference to genetic testing. When it comes to personal genetics, the best kind of knowledge is that which leads to practical and life-saving measures. Achieving these actionable results may be more complicated than direct-to-consumer genetic test companies claim.