‘Why did I get cancer?’ We can do more to alleviate ‘angst, guilt’ accompanying a diagnosis

This article or excerpt is included in the GLP’s daily curated selection of ideologically diverse news, opinion and analysis of biotechnology innovation.
When rocker Tom Petty sang “the waiting is the hardest part,” he wasn’t referring to genetic testing for breast cancer. But he could have been.

After the pathology report from a breast biopsy brings bad news, the next step is often a blood test for risk mutations, probing dozens of genes. Because that information guides the course of treatment, waiting for the findings can send one’s stress level through the roof. I’ve been there.

If a mutation is found, removing the unaffected breast suddenly becomes an option, for it may already be on the road to cancer. Alerting children, siblings, cousins, and nieces and nephews to a familial risk may be appropriate.

Mutations interfere with natural DNA repair, which allows other mutations to persist that release the normal brakes on cell division. By the time a cancer has been around awhile, the errant cells are riddled with mutations.

But mutations in the DNA of white blood cells reflect only the 5 to 10 percent of cancers that are inherited — that is, present in the DNA of every cell of the body and dubbed “germline.” The majority of cancers start in body (aka somatic) cells; they don’t come in with a sperm or egg, but spring up in cells of the affected body part.

Most cancers are genetic but not inherited

I’m in several Facebook groups for breast cancer survivors. Every few days, someone posts a variation on “My genetic tests are negative. I have no family history, I’m thin, I do triathlons, I’m vegan and don’t smoke or drink. So why do I have breast cancer?”

A public service announcement echoes the confusion: “No one in my family had breast cancer. Not one. But I start chemo next week,” declares a distraught woman with a British accent.

I applaud these efforts to educate, but if the frequent posts to my Facebook groups are any indication, they don’t go far enough.

It takes “2 hits” to get to cancer. A person born with a germline risk mutation is already halfway there – a second mutation, somewhere, starts the cancer.

A more common way to get cancer, though, is from two mutations in the same gene in the same body cell (tumor suppressor mutations are recessive). This takes longer than being born halfway there, which is why somatic cancers tend to appear in adults. Because somatic mutations happen in a body part and not sperm or egg, they don’t signal higher risk for relatives.

The “2-hit hypothesis” is nearly half a century old. In 1971 Alfred Knudson deduced it while investigating retinoblastoma, an eye tumor that typically appears during early childhood when the second mutation occurs. The risk for a child with a mutation in the gene RB1 of developing the eye cancer is 100,000 times that of a child who does not have a mutation.

Retinoblastoma is typically diagnosed and a mutation identified after a parent mentions to a health care provider, sometimes just in passing, that the child photographs weirdly. The eyes have white spots. These telltale areas are from light reflecting off a tumor.

When both eyes are affected the glitch is germinal. Because the initial mutation remains dormant in all cells, other cancers can begin later, elsewhere, such as in the pineal gland in the brain, in bone, in soft tissues like muscle, and the skin (melanoma).

Breast cancer is different from retinoblastoma, although both arise from mutations in genes that otherwise suppress tumor formation. A woman may have a heads-up from affected relatives, as did Angelina Jolie, and needn’t actually have cancer to learn that she has inherited a risk mutation in a gene like BRCA1 or 2, ATM, CHEK2, p53, BARD1, or dozens of others. But again, germline (inherited) cancers are rare.

The more common way to get breast cancer – somatic mutations

Genetic tests identify only the germline mutations, in the DNA of white blood cells (red blood cells don’t have DNA). Finding somatic mutations requires testing cancer cells directly, or probing DNA that tumors shed into blood plasma. The first “liquid biopsy” to spot DNA from cancer cells in the bloodstream was FDA–approved in 2016 (I wrote about the technology here).

Related article:  Genes and giraffes: What do those spots tell us?

The blood test that I took from Invitae, a clinical lab, probed 108 genes and found no germinal (inherited) mutations, much to my relief. A physician must order a clinical laboratory test – it’s not a direct-to-consumer spit or cheek-brush situation.

Consumer breast cancer genetic tests do not assess as many genes, or their variants, as do doctor-ordered tests, and some patients may not be aware of the difference. Hence headlines such as “23andMe gene test might falsely reassure some people of breast cancer risk.”  Consumer genetic testing company 23andMe considers only the three most prevalent mutations in the BRCA genes – ignoring the 94 percent of others. A clinical lab, like Myriad, sequences entire genes.

I think the “falsely reassure” is a bit unfair. 23andMe’s website has tons of info on understanding risk (I assign it to my students) and clear disclaimers. But of course not everyone reads them. So I think it’s up to health care providers to explain the two ways that cancer can arise, and emphasize that most cancers are NOT inherited. 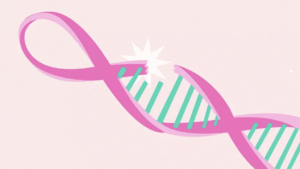 Inheriting a cancer gene is simply bad luck. But we may have a bit of control over somatic mutations because some stem from environmental factors. But others are out of our control because they occur spontaneously, from a quirk of biochemistry.

Environmental causes of cancer are well known. The first link dates to 1770, when Sir Percival Pott attributed the high rate of scrotal skin cancer among chimney sweeps in London to crotch-level exposure to a chemical in soot. Carcinogens include nicotine, estrogen mimics, asbestos, benzene, nitrosamines in cooked meat, other organic (carbon-containing) compounds, and exposure to ultraviolet and other forms of radiation.

I have little doubt that my first cancer, thyroid, was due to five years of x-rays for orthodontia with insufficient protection. I gave up beef right after my breast cancer diagnosis in late 2017. Will becoming a vegetarian help shrink the risk remaining after my treatment? I don’t know, but at least I feel a little bit in control.

Alas, for spontaneous mutations, we’re at the mercy of our biochemistry.

The four DNA bases – A, G, C, and T – pair, A with T, G with C, forming the steps of the double helix. But each base exists, fleetingly, in a slightly different shape, thanks to different ways that hydrogen bonds form.

If a section of replicating DNA forks just where a base is in its rare form, the base can’t pair with its usual partner. An “A” might grab a “C”, and over a few DNA replications, the original AT pair becomes a GC. Like a typo, the mutation is perpetuated, and if it revs up cell division rate, a tumor forms and grows.

The changeling DNA situation, called a tautomeric shift, just happens, to anyone. And somatic mutations accrue, the chance of them triggering cancer rising as we age.

So when someone says, “How did I get cancer? It’s not in my family! I do everything right! Why me?” that’s how and why. We need not just cancer awareness, but understanding of the science.

Of course we should continue to do all we can to avoid exposure to carcinogens. But if health care providers would spend a little more time explaining the biology of cancer to their patients, they might go a long way towards alleviating the angst and guilt that happens when we blame ourselves.  Sometimes it’s just biochemistry.