This article or excerpt is included in the GLP’s daily curated selection of ideologically diverse news, opinion and analysis of biotechnology innovation.
The time has finally come to see if the promises of CRISPR as a therapeutic tool hold true. For the first time, scientists are attempting to cure a disease by inserting the precision gene-editing tool inside a human body — targeting an inherited form of blindness. The clinical trial for the in vivo treatment started in late July, enrolling patients with Leber’s Congenital Aurosis (LCA).

Of course, this isn’t the first time researchers have targeted a disease with CRISPR. China is a pioneer in this arena. It comes as no surprise that the first CRISPR clinical trial took place there in 2016. There are several clinical trials underway using this genome editing technique (a recent search at clinicaltrials.gov gave 28 results), almost exclusively in China and the US. So why is this new LCA study making headlines and being hailed as pioneering?

The previous approaches tested in a clinical setting were predominantly ex vivo studies, where somatic cells are extracted, edited by a CRISPR-based method, and re-inserted into the patient. This methodology can work well for disease such as leukemia and other blood related conditions. It is also promising for cancer treatments where T-cells are engineered (CAR-T cells) to help the immune system recognize and attack tumor cells.

However, this line of work is not suitable for most inherited diseases. A gene therapy that targets a specific tissue, editing the cells and correcting the mutation that causes a severe problem, requires delivery of the gene editing apparatus inside the affected organs. Such an approach is far more challenging, and this is exactly what is being tested by Allergan and Editas Medicine. 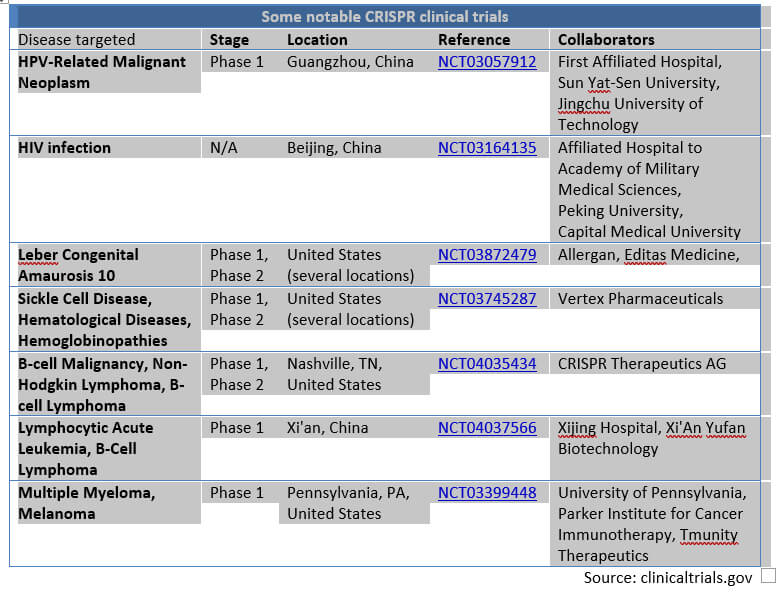 The first studies that reported genetic editing with CRISPR marked it as a potential therapeutic and inspired enthusiasm in the scientific community. The reason is that the CRISPR system is much more flexible than the other known DNA-editing systems (such as zinc-finger nucleases and TALENs). And more importantly, they open the door to edit ‘difficult’ organisms, such as crop plants and mammals.

The simplicity in which CRISPR editing proteins (CRISPR Cas9 and Cpf1 nucleases) work poses also one of the most significant challenges for their therapeutic applications. Simply put, a guide RNA molecule (gRNA) guides Cas9 or Cpf1 to a very specific locus in the genome. The locus is unique, as the gRNA would recognize and form a dimer with only a perfectly complementary sequence. The nuclease then cleaves the DNA, which is fixed by the repair system of the cell.

However, the delivery is not always precise. Even partial base complementation may lead to off-target cleavages (inserting random mutations). The longer the CRISPR is active within a cell, the larger the chance for off-target effects. Consequently, the researchers need to find the perfect balance of treating with a dosage that will stay in the cell long enough to perform the edit, but not too long and cause trouble.

When the CRISPR therapy takes place ex vivo, the clinicians have the chance to screen the cells before they re-insert them, discarding cells with wrong or no edits. Moreover, cells that stay in the organism for a limited amount of time are less likely (but not unlikely) to create side-effects if they get mutated. The story is different when the treatment takes place in a tissue.

Leber congenital amaurosis (LCA) is an inherited disorder that interferes with the retina’s (the specialized tissue at the back of the eye) ability to detect and process the incoming light. Its frequency is about 2-3 in every 100,000 births, and is one of the most common causes of genetic blindness.

LCA can occur due to mutations in at least 14 genes. The common disease subtype LCA10 is caused by mutations in the gene CEP 290. In LCA10, the disease needs two copies of a mutated gene to occur (autosomal recessive inheritance). The disease is diagnosed in infancy, and patients suffer from severe vision impairment – which becomes total by the age of 30-40 – and photosensitivity.

The only way to cure LCA is by repairing the damaged genes or by inserting healthy copies into the retina of the eye. A successful gene therapy treatment was reported in 2010, where a recombinant virus delivered copies of the defunct gene within the patients’ retina.

LCA is a reasonable target for the first in vivo CRISPR gene therapy. The back of the eye is separated from the body circulation, reducing the possibility of nucleases entering other tissues. The condition has no other treatment, the causes a well understood, and the treatment would occur in a one-off intervention. The risk for the patients is minimal, but the gain is tremendous.

Is it similar to germline editing?

In vivo gene therapy should not be confused with germline editing. The germ cells are not affected and any edits will not transfer to the next generation. The intervention is constrained in a few cells, and the treatment is in principle similar to established gene therapy practices. As more information about the – irresponsible – experiments of He Jiankui (a.k.a CRISPR babies) come to light, we should keep in mind the different ways of applying gene editing, each with different levels of public acceptance and safety concerns.

CRISPR as a therapeutic tool is here to stay. The technologies around it develop constantly and new advances render applications easier and safer. I hope the patients involved in the LCA trial hear great news soon, and they soon enjoy gazing at the sunset or looking at the faces of their loved ones – things that the author and the readers of this article may be taking for granted. And I hope in the next few years we will see more, safe, and widely available gene-editing applications into the clinics!