Podcast: Food 5.0—GMOs, robots and the future of farming with agronomist Robert Saik

This article or excerpt is included in the GLP’s daily curated selection of ideologically diverse news, opinion and analysis of biotechnology innovation.
Thanks to dramatic advances in technology, less than 2 percent of the US population works in agriculture today, growing the food the other 98 percent depend on. Such a highly productive farm sector plays an important role in maintaining America’s status as an economic powerhouse, but it’s had a less desirable impact as well: Most consumers don’t know the first thing about farming. 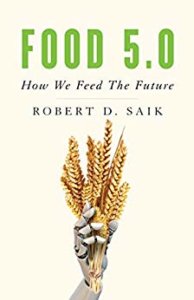 This knowledge deficit has created an environment in which misinformation about biotechnology, pesticides and animal welfare spreads unabated. A recent study found, for example, that consumers with the poorest understanding of genetic engineering are the most hostile to the technology. As the study authors noted:

Our findings highlight a difficulty that is not generally appreciated. Those with the strongest anti-consensus views are the most in need of education, but also the least likely to be receptive to learning; overconfidence about one’s knowledge is associated with decreased openness to new information. This suggests that a prerequisite to changing people’s views through education may be getting them to first appreciate the gaps in their knowledge.

Under such circumstances, persistent myths about agriculture just won’t go away, no matter how many times they’re debunked by experts, including farmers themselves. The introduction of the herbicide glyphosate in the 1970s, for instance, greatly reduced farmers’ exposure to harmful chemicals, but we continue to see questionable news coverage regarding glyphosate’s cancer risks. We also see continued coverage challenging whether so-called “factory farming” is harmful to our food supply, despite overwhelming evidence that farmers are keeping livestock healthy and productive.

The public’s ignorance of agriculture, if not addressed, could become an even greater problem. As the world’s population explodes and farmers scramble to meet the resulting boom in food demand, they’ll need the help of technologies including gene editing, robotics and artificial intelligence. These modern tools have already begun to make a positive impact in agriculture, but as they grow more powerful, regulators will need guidance from informed consumers to help ensure that these important innovations are put to use as efficiently as possible, says Robert Saik, author of the new book Food 5.0: How We Feed the Future.

On this episode of Biotech Facts and Fallacies, Saik joins GLP editor Cameron English to discuss the importance of technology in agriculture and explain why it’s vital for the public to understand what’s happening on America’s farms.

Robert Saik, a professional agrologist and certified agricultural consultant, is the founder of Agri-Trend and principal of Saik Management Group Inc., based in Olds, Alberta, Canada. Email him at [email protected] Follow him on Twitter @RSaik