This article or excerpt is included in the GLP’s daily curated selection of ideologically diverse news, opinion and analysis of biotechnology innovation.
Vaccines are one of the most important medical advances in human history. Public health initiatives to increase vaccination rates have featured everyone from Elvis to Elmo. Physicians and scientists almost universally agree on their safety and efficacy.

“Other than safe water, no other modality, not even antibiotics, has had such a major effect on mortality reduction,” declared the authors of the leading textbook on vaccines.

Vaccines, like any drug, go through rigorous testing and require approval by regulators such as the US FDA or the European Medicines Agency (EMA). But activists known for their fierce opposition to GMOs have cast doubt on vaccine safety—in this case not because of the vaccines themselves (although many GMO skeptics also believe that vaccines are inherently dangerous; GreenMedinfo’s headline: “The truth is that the GMO and vaccine agendas are the same.”), but because of their belief that vaccines contain levels of the herbicide glyphosate.

Online natural product marketers such as Joe Mercola and Mike Adams of NaturalNews peddle this fear-based belief, and pseudoscience websites echo these claims. Their source? That crack science organization Moms Across America (Read the GLP’s profile of MAAM here). 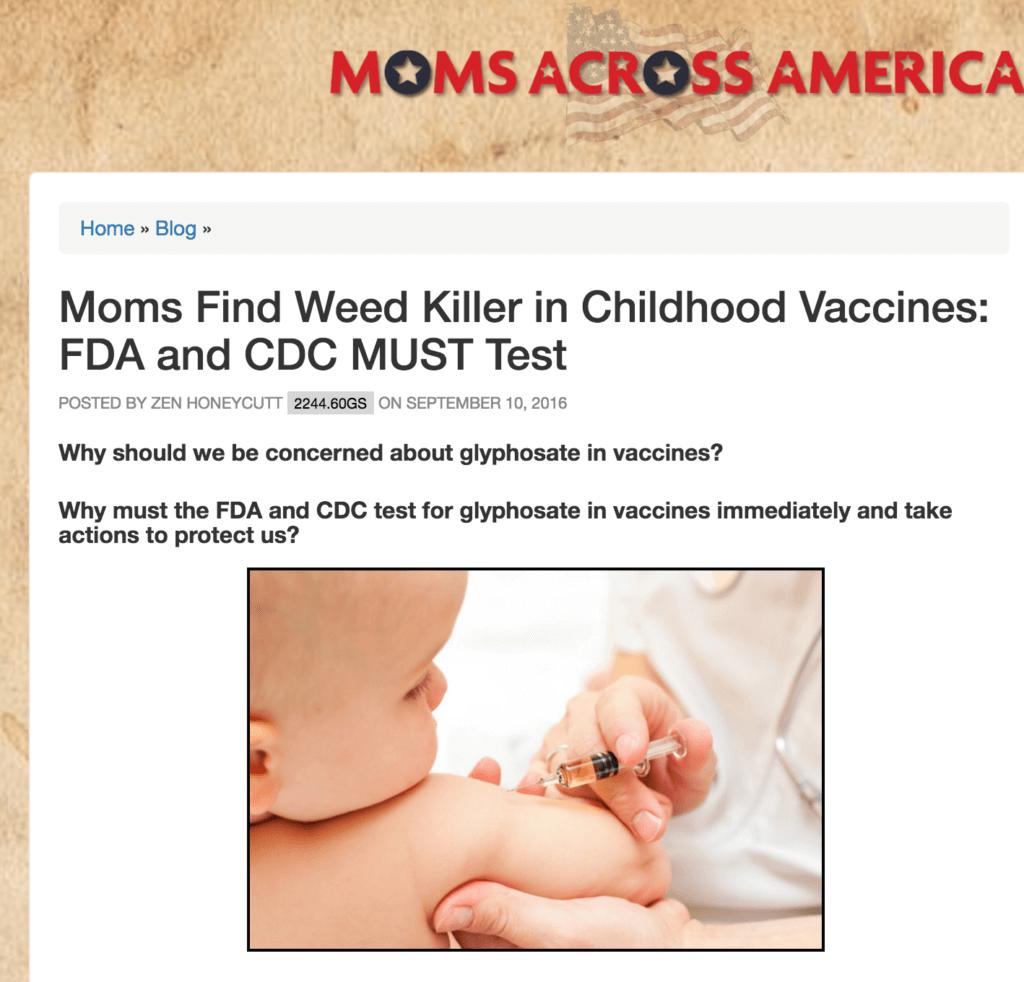 MAAM claims on its website that it contracted with a St. Louis laboratory, which found very low amounts of glyphosate (in the parts per billion range; that equates to about one second in the life of someone 32 years old) in samples of several vaccines—including influenza, DTAP, and MMR. Glyphosate is a favorite target of anti-GMO groups because some genetically modified crops have been engineered to resist the herbicide. Consensus science, including most recently the Environmental Protection Agency, has found is perfectly safe as used. (Read GLP’s GMO FAQ evaluating safety concerns about glyphosate)

MAAM coordinated the release of its study with statements from Anthony Samsel, a self-described “independent scientist,” who said he also found trace levels of glyphosate in vaccine samples.

In a press release on its site, MAAM describes a similar scenario:

MIT scientist Dr. Stephanie Seneff added that “glyphosate could easily be present in vaccines due to the fact that certain vaccine viruses (including measles in MMR and flu virus) are grown on gelatin derived from the ligaments of pigs fed heavy doses of glyphosate in their GMO feed. Livestock feed is allowed to have up to 400 PPM of glyphosate residues by the EPA, thousands of times higher than has been shown to cause harm in numerous studies.

While it’s not at all clear that what MAAM, Seneff and Samsel are claiming is true—the techniques they used are not reliable for determining a chemical at those low levels—these claims raise other questions about their hypothesis: How could glyphosate get into a vaccine?

(Read GLP report on the glyphosate study and Samsel’s claims)

A closer look at the science shows that what MAAMs and Samsel describe is a very unlikely scenario. Glyphosate is metabolized by microbiota in soil; it is not metabolized by plants. Bioaccumulation (ever larger volumes of the chemical after repeated applications) has never been demonstrated for glyphosate. It is not retained in animal tissues and is quickly eliminated by animals that encounter it—that includes humans.

Related article:  Kevin MacDonald responds to criticism of his theory of Jewish ethnocentrism and influence 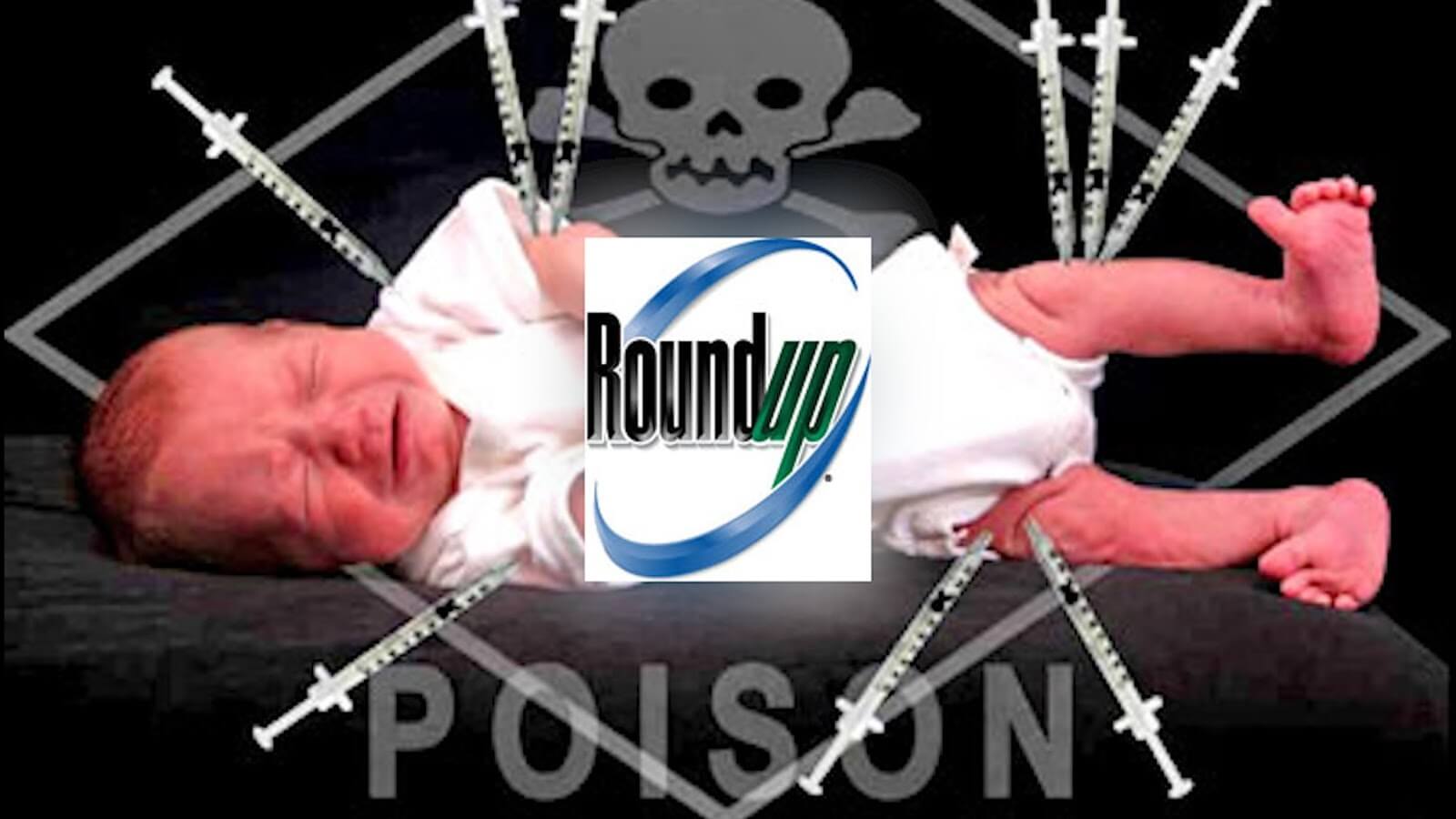 Second, several studies have looked for evidence of glyphosate in goats and hens that were fed the herbicide directly, but no evidence of metabolism of the chemical has ever been found in feces or urine. Microscopic amounts of glyphosate and its first breakdown compound, a molecule called AMPA, were found in some animals. However, rat studies showed that nearly all glyphosate and AMPA clear from the body within 168 hours, with no measurable residue.

Third, their theories misunderstand how vaccines are made, and regulators look for residues of all contaminants, not limited to herbicides, in quality control procedures for vaccine manufacturers. The oldest way to do this is by using eggs—growing viral vaccines in the egg in volumes large enough for production. Manufacturers pay particularly close attention to the nutrition of the egg-laying chicken because what the chicken eats can significantly change how well the egg can host a vaccine. Animal cell culture is a nice alternative to using eggs because many people are allergic to egg proteins. Animal cells are grown in a tightly controlled environment to look at what chemicals are used to feed the cells. One problem from serum sourced from calf or trypsin-sourced from porcin is that animal viruses that could contaminate the culture. Now, most vaccines are grown in cells in serum-free nutrient media. In other words, glyphosate couldn’t possibly be the source of contamination.

The most expensive and intensive part of making vaccines involves the purification steps in downstream processing. These involve chromatography and other precise assays and separation techniques that weed out any host cell proteins, host cell DNA, and other possible viral particles and contaminants that would ruin a batch of vaccine. If in the unrealistic event that glyphosate made it this far, here is where it would get zapped.

Hypotheses are important—they are the key method to how scientific experiments get planned, carried out and understood. They, in short, separate science from a hunch. And point to the difference between grasping at straws, and tilting at windmills. But the hypothesis MAAM, Stephanie Seneff and Anthony Samsel put forward isn’t based on empirical science; it’s grounded in fear-mongering.

This isn’t the first time MAAM has claimed that it found glyphosate in a common item—it’s previously said it found the herbicide in breast milk and wine—claims debunked in numerous independent studies. So while ‘contaminated vaccines’ may seem like cause for concern, it’s really just more of the same.

A version of this article previously ran on the GLP on February 23, 2018.