Moms Across America (MAAM), has intensified its attacks on the herbicide glyphosate, often paired with genetically engineered crops, now claiming ‘dangerous toxic’ residues are present in both vaccines and milk–criticisms that mainstream scientists dismiss.

MAAM states on its website that it is dedicated to raising “awareness about toxic exposure, empower leadership, and create healthy communities.” It has a high profile presence on the internet and coordinates campaigns with organic activists, and specifically targets conventional farming and food.

The group was founded as an informal organization in 2013 by now executive director Zen Honeycutt and Kathleen Hallal. The group organizes protests, marches and social media protests against pesticides and crop biotechnology. MAAM also sells products via its online Health Solutions Store, including Restore that supposedly boosts “gut health” and molecular hydrogen, which is promoted as a general health panacea. Scientists consider both quack products.

MAAM’s most sensational recent claims focus on glyphosate. In September 2016, it claimed that “preliminary tests” that it had initiated and paid for found minute traces of glyphosate in five vaccines, citing results from a St. Louis laboratory with no expertise in handling advanced assays. These claims echo previously debunked MAAM campaigns. Friends of the Earth Europe and Mom’s Across America claimed in 2014 that an informal test they had funded found minute traces of glyphosate in breast milk and urine, causing a furor, with the story widely circulated across anti-GMO and quack websites, and even in such nominally mainstream blogs as Civil Eats. 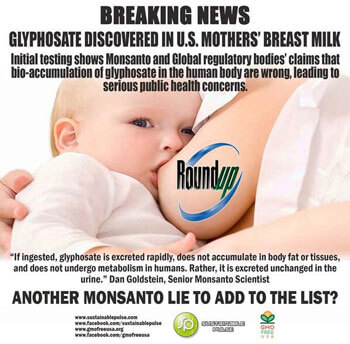 The results were challenged in a study by Washington State University scientist and lactation expert, Michelle McGuire, who found no evidence that glyphosate accumulates in breast milk. Activists criticized the study’s authors, which included three Monsanto employees, although the data was independently scrutinized. Two subsequent German studies, including an independent report in 2016 by scientists affiliated with the independent German Federal Institute for Risk Assessment (BfR)–which does risk assessments for the European Commission–found no traces of glyphosate.

In August 2016, the group, along with Organic Consumers Association and Beyond Pesticides, filed a class action against General Mills. The suit claims the company’s Nature Valley Bars which are advertised as ‘100% natural’ are misleading because they actually contain residues of the pesticide glyphosate. The EPA allows for residues under 30 parts-per-million be label ‘natural’ and Nature Valley Bars are far below this mark at 0.45 parts-per-million—a fact that the complainants acknowledge. However, this is unsatisfactory to MAAM.

When MAAM was organized in 2013, then Grange president Bob McFarland was active in the California Prop 37 and national organic industry-funded “Just Label It” campaign.[1] McFarland and the California Grange became the focus of a National Grand lawsuit seeking to remove the state Grange leadership from office for their organic industry lobbying and advocacy activities.[2] As a result, McFarland was suspended in May 2013.[3] Some reports suggest that a “Green Grange” movement is part of organic and environmental organization political movement to take over the National Grange.[4]

MAAM claims to support activities which promote awareness about GMOs and pesticides. They advocate for a GMO-Free and organic approach to agriculture and food production. Representing MAAM, founder Zen Honeycutt travels globally and has been involved in dozens of initiatives including corporate shareholder campaigns, lobbying state and federal officials on GMO labeling and related issues. The sources of her funding for these activities are not disclosed and she has filed no state of federal lobbying disclosure documents. Honeycutt, who filed both personal and business bankruptcies just prior to launching MAAM, does not appear to have independent financial resources to support her campaign activities.

On Earth Day 2016 MAAM announced the launch of a pro-organic billboard campaign “appearing in 191 locations in 35 cities/13 states nationwide from Earth Day through Mother’s Day 2016…timed to post the week of the National Organic Standards Board meeting being held in Washington DC April 24-27th…” MAAM director Honeycutt blogged that the campaign was targeted to influence U.S. Senate Ag Committee members.[6]

Note: Billboard advertising costs range between $500 – 1,000 in production costs per billboard and between $2,500 – $10,000 (or more) per location.[7] The cost for the MAAM billboards targeting U.S. Senate member of the Agriculture Committee is estimated as costing between $500,000 and $2,000,000. MAAM makes no disclosures as to who pays for its lobbying initiatives.

March Against Monsanto and GMOs

In 2014 MAAM began soliciting contribution to support “glyphosate tests”[8] and promoted claims that Glyphosate in breast milk were found in their “studies”–a claim later refuted by numerous researches, including Washington State University experts who stated the group “just plain got it wrong” with its allegations.[9] It followed this ‘investigation’ up with claims in 2016 that glyphosate was found in harmful trace levels in vaccines.

Honeycutt ran an aroma therapy bath and body line of products called Zen’s Purple Garden[3] which was listed in her 2011 bankruptcy filings and is a dissolved company in California. In 2008, She formed the eco-advocacy group founded Moms for Mother Earth (also called Mother Earth Moms). It’s stated mission was “to create transformation and fun through Environmental activism events and awareness on a global level through the website.” Moms for Mother Earth’s current status is “Dissolved.”

Before launching MAMM, Honeycut posted this video in which she attempts to explain GMOs. In it she blames glyphosate for increases in everything from depression to diabetes to immune disorders to a dissolving of the blood-brain-barrier.

Donations to the Moms Across America March were long managed by the California State Grange, “our 501(c)(8) fiscal partner” according to the MAAM website. However, in 2014 the California State Grange was reorganized after losing its charter linking it to the national organization, and the current group claims no affiliation with or support for MAAM. MAAM now is a 501c3 non-profit, tax-exempt organization. MAAM has acknowledge sponsors, many of which sell organic food [26]: