Viewpoint: Netflix’s new horror movie ‘Eli’ is a fright. But why did they have to ‘tarnish gene therapy’?

Ricki Lewis | October 30, 2019
This article or excerpt is included in the GLP’s daily curated selection of ideologically diverse news, opinion and analysis of biotechnology innovation.

The new horror flick on Netflix, Eli, released just in time for Halloween, borrows from The Exorcist and Rosemary’s Baby, with touches of The Shining. And it all takes place in what looks like Downton Abbey with the cleaning staff gone.

The film opens with 11-year-old Eli dreaming about being able to go outside without his hazmat suit and breathing without his skin reddening and blistering. He awakens and he’s inside, in a bubble.

David was diagnosed, four years earlier, with a rare form of severe combined immune deficiency (SCID). It slashes his ability to make the antibodies that protect against infection, unleashes inflammation that reddens his skin, while at the same time turns his immune system against his own tissues, an autoimmune response.

The parents, caring Rose and weirdo Paul, bundle Eli up to take him to a doctor who’s going to cure him with a new treatment. Once at the supposedly “clean” Downton Abbey haunted house, Eli has a decontamination shower.

When the boy meets the doc, she explains that his immune system makes “too many bad immunoglobulins,” using that word instead of antibodies because it sounds more technical. Eli quickly responds, spouting out that he has mutations in the RAG1 and RAG2 genes (recombination-activating genes).

Eli’s body can’t make the enzymes that mix and match antibody parts, and the proportions of a bunch of immune system cells and proteins go out of whack. His condition is also called Omenn syndrome.

Dr. Horn has two nurses, and all three of them wear purple uniforms.

Good news! Dr. Horn will administer viral gene therapy! “I will make you better, like my other patients,” she assures the boy.

Rose gingerly begins to unwrap the blue layers that encase her son, bending down and looking like Laura Dern examining dino poo in Jurassic Park or Princess Leia releasing the hologram from R2D2. Mom and boy can finally hug!!! 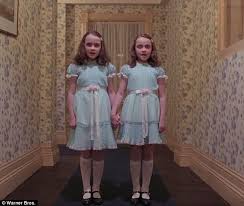 At night, the house creaks. Eli wanders the spooky halls, glimpsing kids in the windows, mirrors, and reflections, including ghostly girls who look like the twins at the end of the hallway in The Shining.

“I’m allergic to the world,” Eli tells her. Not exactly.

The next morning, Dr. Horn blames Eli’s ghost sightings on a side effect from immunosuppressants. Why is she trying to suppress an immune system already so impaired?

Next Eli, who looks so much like Tom Petty that I expected him to shriek “I Won’t Back Down,” is strapped down to a table with a contraption holding his head in place, as Dr. Frankenstein asks her nurses to “take a reading.”

Dr. Horn at first seems to have gotten the basic idea of gene therapy correct: introducing a working copy of the mutant gene aboard viruses into stem cells from bone marrow. “And poof! Like a magic trick!” it’ll work, she proclaims.

She proceeds to extract a hunk of pinkish gunk after drilling into a bone, as the immobilized boy twists and grimaces on the table. Satisfied, the doc plops the glob into a Petri dish.

“That means it’s working,” replies the doc. Within seconds, the doctored viruses have apparently hit their targets.

Then Eli awakens. It all seems a dream, but it’s foreshadowing.

A ghost appears in a bloody nightgown.

The house breathes at night.

A scrawny, dagger-nailed hand grabs Eli and the apparition turns into his father.

When Eli writes his name on a window, the letters rearrange to spell Lie, like Redrum becoming Murder in the mirror in The Shining. Later on, with the “E” written like a 3, “Eli” scratched into various furniture surfaces in the house becomes 317317317. What can it mean?

When Eli reports these events, Dr. Horn barks, ‘It’s the medication,” as if sophisticated gene therapy has suddenly become as mundane as a tab of Tylenol. She’ll have to lower the dosage because the second of the three treatments is coming up.

Treatment 2 is indeed brutal. Eli is held in a contraption like the one Hannibal Lecter wears to keep him from eating people and his head bolted like he’s Frankenstein.

“We’re confident that the gene therapy virus is correcting the mutation,” Dr. Horn declares, adding that “this will burn a little bit,” as she presumably delivers more.

When Eli turns red and screams, she assures him that “this is supposed to happen. The virus is penetrating the blood-brain barrier,” as if said barrier is a superhighway requiring that the bolts hold his head still.

“Barrier” refers to the blood vessels in the brain that are closed to large molecules, which keeps toxins out. A widely-used gene therapy vector, AAV9 (adeno-associated virus 9), has been known for a decade to naturally cross the barrier. And that doesn’t require torture hardware.

Here’s a photo of one of the kids I write about receiving AAV9 gene therapy for a rare neurological disease – through an intravenous delivery in her hand!

The doc then attributes Eli’s reaction to his body initially rejecting “the new cells, like any transplant.” But if his gene therapy consists of viruses traipsing across the blood-brain barrier, where did cells suddenly come from? Is it the doctoring of stem cells from bone marrow that was in Eli’s dream, or delivering viruses into the bloodstream?

Related article:  Meat wars: Sourcing from animals may not be what distinguishes meat from 'meat alternatives'

The mysterious 317 opens a key pad to an inner sanctum, which looks like the set of the second Indiana Jones film. We see insects alighting, so the place was never a clean room after all.

Eli finds a notebook with case histories of the past patients and the pieces start to fit. Perry. Agnes. Lucas.

Then the religion clues start to fall out.

Eli discovers a photo of nuns that includes his medical team. A huge iron cross sheaths a dagger. The surgical table with Eli across it resembles Christ on the cross.

One reviewer posits that the plot is about gay conversion, pointing to a scene in which Eli literally crawls out of a closet to tell his parents the truth.

The action speeds up and twists as treatment 3 looms.

Dr. Horn dons religious garb, makes the sign of the cross, flings holy water, and babbles about Jesus and the archangel. The boy, having discovered the medical records, has become a liability.

“I thought I could cure Eli. The gene therapy would have worked, if he wasn’t so strong. But he can’t leave here!” the enraged doc yells.

But when Eli is tied down and Dr. Crazy is coming at him with the dagger pulled from the cross, he suddenly summons his inner Regan MacNeil (from The Exorcist) and stops the knife in mid-air, turns it around, and forces the doctor to stab herself. She mutters “may you find peace and forgiveness in the name of the Lord,” channeling Father Damien Karras’ “The power of Christ compels you!” as he attempts to exorcise Regan.

With the plunging of the dagger, Eli, red-eyed and screaming, rips off his restraints. His parents are thrown to the floor while the nurses and the doc, somehow still living with the dagger in her chest, try to leave. 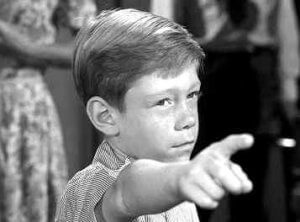 But Eli, like Anthony in the “cornfield” episode of the Twilight Zone, points at them and they turn in unison and then elevate, like Regan rising from her bed. The purple ones then float around the room in an eerie circle emanating an unearthly blue glow, as if they’re on one of those centripetal force amusement park rides.

It turns out that all are in on what’s happening, even the nice-seeming mom. And Eli realizes he’s never been sick.

At that the nurses and doc suddenly flip upside down, the horror equivalent of Regan’s rotating head, and slam to the floor.

Eli sets the nurses and doc on fire.

“I prayed every day!” answers dad.

“Prayed to whom?” the boy bellows.

“The Lord didn’t answer me, but your father did,” Rose utters mysteriously.

Eli never had a SCID. It’s a twist on Munchausen Syndrome by Proxy, the cause of his symptoms the holy water that mom and then doc sprinkled on him.

But the ultimate cause? Dad is the devil. At that realization, Eli makes his dad’s head explode.

The other kids, whose bodies indeed turn up, were Eli’s half-siblings, even Haley. Dad the Devil got around.

“Eli” is fun, fast and scary. But why did the writers have to tarnish gene therapy? Why use a genetic disease at all? And especially an ultra rare one? I can’t help but wonder what motivated the writers to do this.

I’ve devoted the past decade to learning about families who have rare genetic diseases and have kids who have had, or wish they could have, gene therapy, writing about them, and accompanying some of them on their journeys.

In addition to my posts here and at my blog DNA Science, I wrote the only book on gene therapy, The Forever Fix, which chronicles the efforts of a few families. The first gene therapy was FDA-approved in late 2017. The technology has indeed been like the mythical phoenix bird, arising from the ashes.

For the families, I resent the use of gene therapy as a plot point.

After viewing the film the other night, I did a final Facebook check. The first thing that popped up: a photo of an exquisite child, on a page for families dealing with Sanfilippo syndrome, a devastating neurological condition.

Genetic disease, and especially attempts to treat it, shouldn’t be the stuff of horror films.