This article or excerpt is included in the GLP’s daily curated selection of ideologically diverse news, opinion and analysis of biotechnology innovation.
For years, critics of GMOs have focused on the idea that modern technologies have allowed plant breeders to take genetic material from one species and add it to another—adding ‘foreign genes’, they call it.

These transgenic crosses are responsible for most of the GMO crops that dominate US farmland. But they’ve also offered a rallying point for critics, who’ve built a deceptive narrative around the idea that these “Frankenfoods” should be feared and shunned by consumers.

Among the best-known example is the infamous “fish tomato”—a tomato that was given an antifreeze gene from a flounder to make it less vulnerable to frost. The tomato was never commercialized. There is no approved fish tomato. Yet the dominant visual meme on the web when you search for GMOs involves a tomato with a syringe injecting ‘dangerous GMOs) into it, a pure fabrication.

From a science perspective, however, this has never really been an issue. Certainly, there can be reasons for caution—for example, moving genes from a peanut into another food item could create issues for people with peanut allergies. 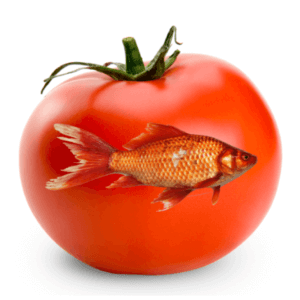 But genes are genes. We share about 97.5 percent of our working DNA with mice, which is why they make such good lab subjects. With chimpanzees, the number rises to 98.5 percent. And from the land of the weird, we share roughly half of our DNA with banana plants.

The reality is that life shares genes because all living things share a common ancestry. Genes are expressed differently in each living being, but also are in no way “foreign.” That may be a popular word for anti-GMO activists, but it’s not a term that scientists use.

Yet this kind of visual and written demonization continues. But with the advent of gene editing, and the CRISPR revolution, this talking point may largely end.

Scientists are finding ways to bypass the objections to the transference of genes by using new breeding methods developed from a growing gene-editing toolbox.

Among the most important of these is CRISPR, which allows scientists to make precision edits to plant and animal DNA, adding useful traits, usually without inserting genetic material from another species.

There are also a number of other innovations, loosely grouped together under the umbrella of New Breeding Techniques (NBTs). Among them are, zinc finger nuclease, TALENs and meganucleases. CRISPR has attracted the most attention because it is more efficient at editing DNA.

NBTs are just a natural progression in the application of science to agriculture. This, after all, is what humankind has been doing for thousands of years through the processes of selecting for traits. Traditional methods include cross-breeding, hybridization, grafting, mutagenesis, protoplast fusion, marker-assisted breeding and genetic modification. The new breeding techniques that are being developed are needed to boost food production for a growing world population that is expected to reach 10 billion by 2060.

NBT products on sale and in the pipeline

Several companies and organizations are developing gene-edited food crops and medicines, which they hope to bring to the market over the next few years:

Another new process involves silencing, or turning off, specific genes in plants and animals. Scientists in Australia used this technique to protect tobacco plants from a virus for 20 days using a single application of a gene-silencing spray. Okanagan Specialty Fruits has used gene silencing to develop non-bruising apples and Simplot has utilized the technology to create bruise free potatoes.

Having failed in their efforts to stop GMOs by raising unsubstantiated ‘Frankenfood’ safety concerns, opponents are now targeting these new technologies. Among other things, they argue that NBTs are inherently risky because of unknown consequences for human and animal health and the environment.

“[It] entails numerous risks and uncertainties,” says Franziska Achterberfer, Greenpeace’s EU Food Policy Director. The engineering process is not well-understood and can result in unexpected and unpredictable effects on the environment and human and animal health.”

Christoph Then, head of Testbiotech, an anti-GMO NGO, argues that editing could create radical changes to the genome:

We do not have the experience to declare these products safe. If these new techniques are not regulated, there will be no transparency, no choice for farmers and consumers as well as no possibility of safeguarding human health or protecting the environment.

They also complain about the lack of long-term studies demonstrating the safety of foods created using these techniques. “It is widely accepted in the scientific community that there can be off target effects to the genome when the technologies are utilized. GMOs, including the products of these new technologies, have not been adequately tested—no long-term feeding studies have been conducted—and people are starting to connect these experimental technologies to health concerns,” argues Megan Westgate, executive director of the Non-GMO Project.

Related article:  Farmer to FDA: Get rid of misleading 'non-GMO' and other fad food labels

This echoes a similar argument made for years over traditional GMO foods, despite the fact that these foods enjoy overwhelming support in the scientific community and US government regulators. In fact there have been dozens of long terms studies showing no effects, and no health problems have been found in humans or animals after 21 years of use and trillions of meals.

Could NBTs be accepted as organic?

Genetic modification is a breeding technique. There is no theoretical reason that a gene-edited crop (or a GMO for that matter) could not be grown using organic practices. The opposition is ideological, rooted in the politics of the anti-GMO movement.

There are some organic farmers that would like to explore the possibility of using seeds developed using NBTs. They note that new breeding techniques could be useful in producing crops that are disease-, drought- and stress-resistant and nutritionally enhanced. They say that organic farming already utilizes mutagenesis and therefore new NBTs similar to mutagenesis may be acceptable.

Raoul Adamchak, an organic farmer who is married to the noted plant geneticist Pamela Ronald, has maintained an open-minded view of the new technologies:

To be accepted by the organic community, using CRISPR would have to be seen as being a better method of crop improvement than mutational breeding, and of course it is. It is more precise than mutagenesis and avoids unwanted mutations, opening up possibilities for crops which couldn’t be developed using older techniques. As long as mutational breeding is accepted by the National Organic Program, then this type of CRISPR function should be accepted as well.

But the national organic organizations and indeed organic organizations in almost every country have issued statements opposing the embrace of gene editing and NBTs. This opposition was highlighted in November of 2016 when the National Organic Standards Board (NOSB) voted unanimously to recommend to the USDA to prohibit all forms of GMO 2.0 technology, including gene-editing, gene silencing and synthetic biology, from use in organic farming. 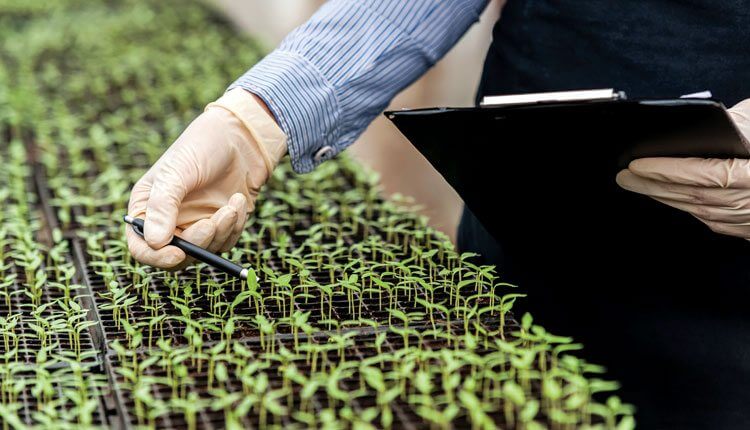 That vote was celebrated by Dana Perls, senior food and technology campaigner for Friends of the Earth:

The Board’s hard fought proactive stance…will both help to preserve the integrity of organic standards and raise awareness about this virtually unregulated and unlabeled form of genetic engineering. It’s critical that organic standards treat new types of genetic engineering that are rapidly entering our food and consumer products as rigorously as the first generation of GMOs.

How much of this criticism and caution is valid?

As was the case of GMOs, these negative campaign tactics against NBTs could ignite a public backlash against them, leading to demands for stifling regulations that could slow innovation and add to the cost of funding new food science projects.

The scientific community and companies involved in new breeding technologies are trying to answer these claims, and refute the ones that are wrong or misleading.

“Basic gene-editing makes mutations that are indistinguishable from those found in conventional breeding so it makes no sense to call these GMOs,” says Huw Jones, a professor of translational genomic at Aberystwyth University:

Better to regulate them simply as novel foods … reducing overly burdensome costs and streamlining regulation for gene-editing plants with no foreign DNA would not only be logical but allow smaller plant breeders and research organizations to see these benign methods for public good breeding projects in locally important crops and focus on less-profitable traits for sustainable agriculture and nutritional quality.

Opponents of NBTs continue to insist that NBTs present such serious risks that we should forgo using them because of the potential damaging consequences to our health and the environment. These were the same arguments leveled against GMOs and they proved to be without merit.

In reality, the greater danger is to reject them. Without them we may not be able to protect our food resources from the effects of climate change and the ravages of crop and animals diseases and pests. They could also prevent us from developing nutritionally-enhanced foods to help those around the world struggling with malnourishment. Shutting the door or stifling New Breeding Techniques will mean we would be utilizing less productive and more expensive means of growing the food we need to consume.

A version of this article first appeared on the GLP on February 26, 2018.