How fertile are you? ‘Ovarian reserve’ DTC tests that count your eggs offer mixture of control and misinformation

Ricki Lewis | January 21, 2020
This article or excerpt is included in the GLP’s daily curated selection of ideologically diverse news, opinion and analysis of biotechnology innovation.

The direct to consumer testing market comes in many flavors these days, with companies like 23andMe dominating headlines with their genetic/ancestry tests targeting folks eager to learn more about themselves. Also joining the fray are tests designed to help women — in theory, at least — assess fertility by counting the number of eggs left in their ovaries.

Sounds like a great idea. Just one problem: egg counts may not be such a great indicator of fertility, according to the American College of Obstetricians and Gynecologists.

Still, that doesn’t mean these tests have no value. A new study suggests they can empower women. And that’s especially true for those who do not fit into the binary gender categories that health insurers may require for covering clinical versions of the test that cost ten times as much.

At-home tests for reproductive health for women have been around since the first home pregnancy kits hit the market in 1978. In 1989 came the first DIY ovulation predictor kits.

Tests to measure “ovarian reserve” – how many eggs are left – don’t have the track record of these older tests. And they may not even be accurate for women who haven’t had difficulty conceiving or are taking birth control pills.

But do they still have value?

Moira A. Kyweluk, a fellow in the department of Medical Ethics and Health Policy at the Perelman School of Medicine at the University of Pennsylvania, decided to find out. She interviewed 21 women, of diverse backgrounds and circumstances, to tap their thoughts about direct-to-consumer (DTC) testing of ovarian reserve.

The women were recruited from social media, community center notice boards, and listservs, in Chicago during the first half of 2018. The findings appear in Social Science & Medicine.

Egg counters sold to consumers are part of the “FemTech” market. “I view DTC testing as an entry point into what I term the ‘new (in)fertility pipeline’ for women today. Because it is low cost and widely available, it’s reaching a larger demographic, people of diverse identities and backgrounds, and raising awareness of more advanced procedures and technologies like egg freezing,” Dr. Kyweluk said in a news release.

But she questions the accuracy of these tests. “Consumers continue to desire these tests, and they’re attractive, but they don’t deliver on their promise.”

The biology behind egg counters

The number of immature eggs in the two ovaries dwindles as a female ages.

Seven to eight million tiny undeveloped eggs are already present in a 20-week female fetus. That means, curiously, that a pregnant woman houses the cells that, when fertilized, will become her grandchild. 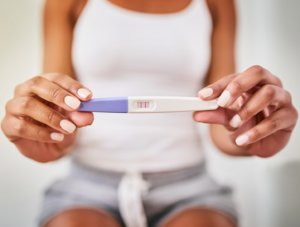 By birth, about a million oocytes remain, and that number is halved by puberty. Then by the start of menopause, around age 51, only 1,000 or so eggs remain. Over her lifetime, a woman ovulates 300 to 400 eggs.

Each egg occupies a chamber called a follicle. Each month between puberty and menopause, the largest egg pops out in response to a crescendo of luteinizing hormone – that’s ovulation. Meanwhile, anti-Müllerian hormone (AMH) suppresses release of the other, smaller eggs.

Measuring AMH is the basis of clinical tests used to predict ovulation in women undergoing in vitro fertilization (IVF) or egg freezing, presumably because they’ve been unable to conceive. But the accuracy of AMH level to predict ovarian reserve among women who are fertile isn’t known.

And so in 2019, the American College of Obstetricians and Gynecologists (ACOG) issued a statement that consumer kits to measure AMH aren’t ready for prime time. The products are too variable and not standardized.

“Serum anti-Müllerian hormone level assessment generally should not be ordered or used to counsel women who are not infertile about their reproductive status and future fertility potential,” according to the statement. It includes a hypothetical case that illustrates misinformation about AMH testing:

A 26-year-old woman comes in for a wellness exam and the provider mentions the effects of aging on fertility. “I’m not ready to become pregnant now, but I would in the future. My friend recently took a blood test to check her egg count, so she knows how much longer she can wait to have a baby. Can I have that test?”

If she meets criteria for infertility, her insurance might fork over a large part of the $1,500 cost for such a test. That’s why a DTC test kit that requires a pinprick of blood and costs $79 to $199, without requiring evidence of anything or an uncomfortable meeting with a health care provider, is an attractive alternative – if it provides useful information.

What’s on the direct-to-consumer market?

The website for an ovarian reserve test kit from Modern Fertility does comport with the ACOG statement.

“Want kids one day?” the opening page announces, like asking if you want to order a pizza. Women are invited to join a weekly “egginar” for information before they “dive into the science that helps you do you.”

Clicking ahead shows clear warnings that the test won’t reveal infertility, but will indicate if a woman’s egg count is more or less than is average for her age. It sounds like peering into an egg carton to count whether it has all 12 expected eggs.

The Modern Fertility test is also quite clear about what it can and can’t do. A woman can discuss the results with her physician and ask about further testing and possibly pursuing IVF or egg freezing. Or, if she only has half a dozen in the egg carton analogy, she might expect to experience menopause sooner than she’d thought.

Countering the ACOG statement is the LetsGetChecked product. “The Ovarian Reserve Test is for anyone who is curious about their fertility status,” according to the website. It costs $139.

The website for LetsGetChecked has a helpful list of conditions that can accelerate the whittling down of egg number, which a consumer can bring to a physician to explore further. These include polycystic ovary syndrome, chromosomal abnormalities such as Turner’s (XO) syndrome and fragile X, endometriosis, ovarian tumors, autoimmune disorders, and pelvic injuries. The woman would already know if she’d had chemotherapy or radiation, which can damage eggs.

Dr. Kyweluk designed a study that would take a real-world view of the issues that might prompt a woman to take a DTC ovarian reserve test. Her paper is a series of vignettes.

The research differs from standard medical studies in that it is “ethnographic,” taking into account race and ethnicity, relationship status, insurance, sexual orientation, and socioeconomic group, because the reasons for seeking ovarian reserve testing go beyond biology. Dr. Kyweluk interviewed the women as they were deciding whether or not to take a test. She had a grant that paid for those who wanted to go ahead, using one company that provided access to a nurse practitioner to interpret findings.

Of the 21 participants, aged 21 to 45, 14 were white, 14 heterosexual, and 7 bisexual or queer. Three different scenarios of women seeking the DTC test indicate the variability of need.

“Yvette” was a 37-year-old African-American who had been trying with her husband to conceive for a decade. Their health insurance was quick to cover birth control, but assessing fertility, not so much.

When Yvette’s ovarian reserve results were normal, the nurse suggested an ovulation predictor to better time intercourse and have her husband have a semen analysis.

“Naomi” was “typical” of a high-income, highly-educated white woman, who was stressing over whether she really wanted to have a baby. Would an ovarian reserve test indicate that it wasn’t in the cards? Then she could stop thinking about it, or freeze eggs, which she could afford to do. Many women can’t.

“Josephine” was 35 and African-American. A devout Catholic, she had just ended a long-term relationship. Her faith prompted her to ask, “was I meant to be a parent?” and she felt that the ovarian reserve test, if she had too few eggs, might reveal “no.”

Several women reported that taking the ovarian reserve test empowered them. “Caroline,” for example, was a 30-year-old queer white woman with a female partner. Medicaid had denied them coverage of any elective tests, and they didn’t meet the diagnostic criteria for infertility because they were not a heterosexual couple.

The DTC test “made me feel I’m in control, like I can want some information, pay for it, and then get it. I didn’t have to rely on a doctor to decide it was necessary for me to know this information. This is information that I’ve wanted forever,” “Caroline” told the researcher.

In one confusing case, the cisgender female partner (“Breanne”) of a transgender man (“Tal”) discovered, using a DTC test, that her ovarian reserve was quite low, something she’d suspected from her age and irregular menstrual periods. The couple had planned to use a sperm donor and Breanne would carry the pregnancy. But if Breanne didn’t have enough eggs, what would they do?

They had an idea. Did Tal still make eggs?

He’d been receiving testosterone injections for a decade as part of gender-affirming treatment and sported a full beard. But the DTC ovarian reserve test revealed he was still making the normal number of eggs for a cisgender woman his age. He’d carry the pregnancy!

The bottom line: A DTC ovarian reserve test can give a woman a sense of control, but at the expense of an incomplete, confusing, or even meaningless clinical picture.

From a broader perspective, is egg counting an example of the medicalization of the range that is normal reproductive biology? Will it create the “patients-in-waiting” scenario that describes newborn screening that identifies genetic diseases well before they cause symptoms?

Steve Jobs is famous for inventing things that we didn’t know we needed – the iPod and then the iPhone. To paraphrase and take him a bit out of context, “A lot of times, people don’t know what they want until you show it to them.”

Just as it took years for so many of us to realize that we couldn’t live without smartphones, it will take time for data to accrue that improve the accuracy of DTC ovarian reserve tests in predicting infertility. Until then, it might be just one more thing to worry about.