This article or excerpt is included in the GLP’s daily curated selection of ideologically diverse news, opinion and analysis of biotechnology innovation.
Anti-biotech activists have long argued that genetically modified crops are “unnatural.” The popular food certifying non-profit Non-GMO project, for example, claims that

Genetically modified organisms (GMOs) are living organisms whose genetic material has been artificially manipulated in a laboratory through genetic engineering. This creates combinations of plant, animal, bacteria, and virus genes that do not occur in nature or through traditional crossbreeding methods.

The Institute for Responsible Technology, a one-man operation headed by anti-GMO activist Jeffery Smith, adds that “….genetic engineers must force the DNA from one organism into another. Their methods include….using viruses or bacteria to ‘infect’ animal or plant cells with the new DNA.”

This fear of the unnatural is the foundation for nearly every anti-GMO argument ever conceived, but it’s also wholly unjustified. The techniques scientists have developed to breed biotech crops were copied from nature—and Smith’s example helps demonstrate the point.

Certain bacteria and viruses have always been at war. In fact, there are viruses called phages that infect bacteria and use them to replicate. The viruses land on the surface of bacterial cells and inject their DNA into the cells, essentially turning bacteria into virus factories. But bacteria aren’t defenseless against these assaults. They utilize proteins called restriction enzymes to chop up the DNA of invading viruses before they can infect the bacterial cells. Cleverly enough, phages evolved a counter-counter measure to avoid being hacked to pieces: they edit their own DNA so the bacteria can’t recognize them as invaders. Werner Arber and several other scientists who discovered this virus restriction mechanism were eventually awarded the Nobel Prize, because their research laid the foundation for modern biotechnology.

The genesis of GMOs

Building on Arber’s work as well as experiments performed by Paul Berg and Hamilton Smith, biochemists Herbert Boyer and Stanley Cohen showed in 1973 that a newly isolated restriction enzyme could be used to cut a DNA strand at specific nucleotide sequences. The pair of scientists also found that another enzyme called DNA ligase could be used to attach this cleaved DNA strand to the genome of another organism.

This story offers a fascinating example of how basic research can lead to revolutionary discoveries. But beyond that, there are a few important points to draw out of this science history lesson that directly apply to the current debate around GMO and gene-edited crops.

The ability to cut and reattach DNA is an evolved trait that bacteria and other prokaryotes use to fight off infection. Scientists discovered this mechanism and put it to work to produce new foods and medicines—they didn’t create it artificially. The genes, enzymes, and organisms that allow us to recombine DNA exist in nature.

To go one step further, this type of genetic modification is possible because all living organisms share the same genetic code, DNA. With a few exceptions, every species replicates its DNA and synthesizes proteins the same way. This is why, for instance, we can take the human gene that controls insulin production, add it to a bacterial cell, and make as much of the hormone as we need to treat diabetics. 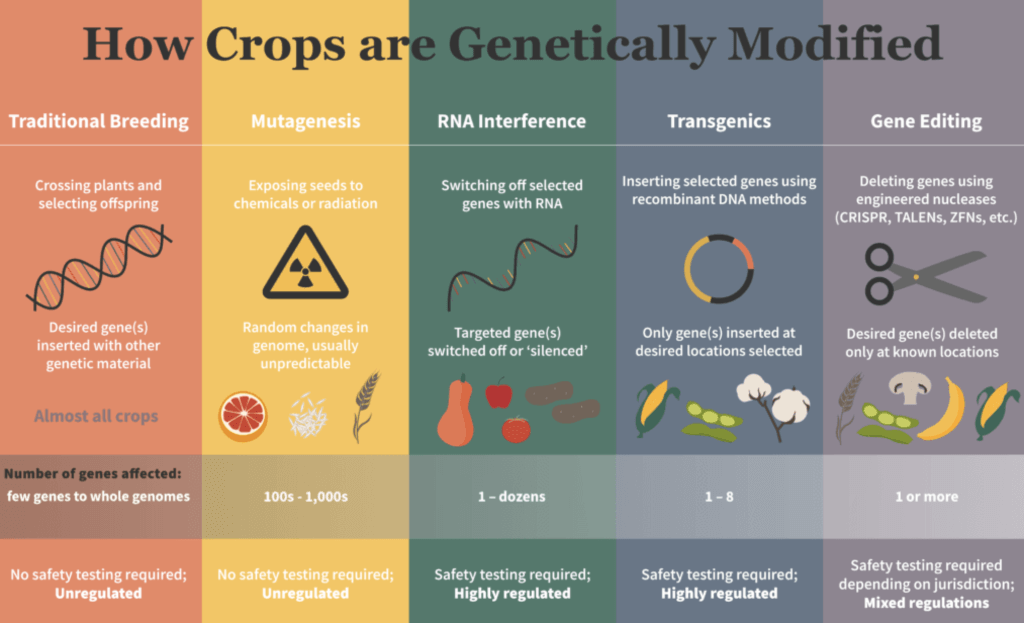 Defenders of crop biotechnology have pointed out that all food is genetically modified in some way. The old adage that our food crops hardly resemble their ancestors thanks to thousands of years of plant breeding is true, but there are many examples of plants and other organisms naturally exchanging genes, making them GMOs. As science writer Arvind Suresh noted in a 2016 GLP article, researchers discovered in 2015 “that practically every known species of cassava (sweet potato) contained genes from the Agrobacterium, a bacterial species whose genes….were inserted over 8,000 years ago….”

The monarch butterfly, the same one that adorns every non-GMO Project label, is an even more poignant example, as another 2015 study illustrated. Geneticist Val Giddings pointed out the irony of this situation in October 2018:

These are not merely exceptions to the rule. As the authors of a September 2019 study in Plant Molecular Biology explained, “Naturally transgenic [GMO] plant species occur on an unexpectedly large scale.” The list includes food crops such as bananas, peanuts, Surinam cherries, hops, cranberries and tea, deemed transgenic because they contain DNA from the Agrobacterium mentioned above, the microbe researchers often use to transfer genes between species. More research remains to be done on this phenomenon, but the study authors suggest that this horizontal gene transfer mechanism possibly plays an important role in plant evolution.

So even by Jeffery Smith’s definition of genetic engineering–”using viruses or bacteria….to ‘infect’ animal or plant cells with the new DNA”– the takeaway is clear. The most controversial element of biotechnology is a trick we learned by experimenting on bacteria, some of the simplest life forms in existence.

The next time you see anti-GMO activists fretting about crops engineered to resist glyphosate, or gene-edited soybeans with healthier fatty acid profiles, remember that the scientists who “created” these transgenic and cisgenic plants started with completely natural genetic tools that have been used for millions of years.

Cameron J. English is the GLP’s senior agricultural genetics and special projects editor and co-host of the Science Facts and Fallacies podcast. Follow him on Twitter @camjenglish

An earlier version of this article originally appeared at RealClearScience as There Is Nothing Unnatural About GMOs and has been republished here with permission.