The Non-GMO Project—a non-profit founded in 2008—certifies that a company’s product has no genetically modified ingredients. It charges companies from several hundred to several thousand dollars, depending on the complexity of a product’s supply chain.

The group’s mission statement reads: “The Non-GMO Project is a non-profit organization committed to preserving and building sources of non-GMO products, educating consumers, and providing verified non-GMO choices.” But its oft-admitted goal since its incubation has been to remove GMOs from the marketplace, with the non-GMO label seen as a tool to make that happen.

Executive Director Megan Westgate told the Wall Street Journal that it is focusing on shrinking the market for existing GMO ingredients and prevent new commercial biotech crops, which would grow the business of the organic and natural products industry. That philosophy can be traced back to 1997, when Peter M. Ligotti, a Maharishi cult member and organic industry marketer pitched the potential marketing benefits of such a label to Whole Foods (email from WikiLeaks):

To label the non-GE food will create an incredible market niche in the U.S. and will create greater awareness of the issue world-wide. Marketing people would seize upon the idea as a way to create product differentiation while doing some good for the world…. Go for a total ban at the same time. When we do achieve a ban, we will need to know which products to leave on the shelves and which to throw away. Labeling the GE and NON-GE food will give us clarity when that day finally arrives.

The Non-GMO label landed its most high-profile partner in the conventional food industry when Cargill announced in March 2017 with a Tweet and a press release that it was partnering with the Non-GMO Project to verify three of its ingredients: erythritol, cane sugar and high oleic. 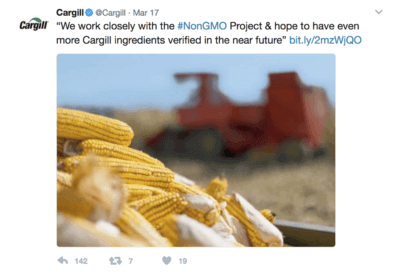 “Consumer demand for non-GMO food and beverages is growing, and Cargill is responding,” said Mike Wagner, Managing Director for Cargill Starches and Sweeteners North America. “We’re delighted to work with the Non-GMO Project, the leading verifier of non-GMO products in the United States. Their distinctive trademark is the most recognized symbol for non-GMO products in the country.”

The partnership touched off backlash in the science, journalism and farming communities, and thousands of Tweets lambasting, Cargill, which then rushed out a statement on Twitter distancing itself from its down agreement. 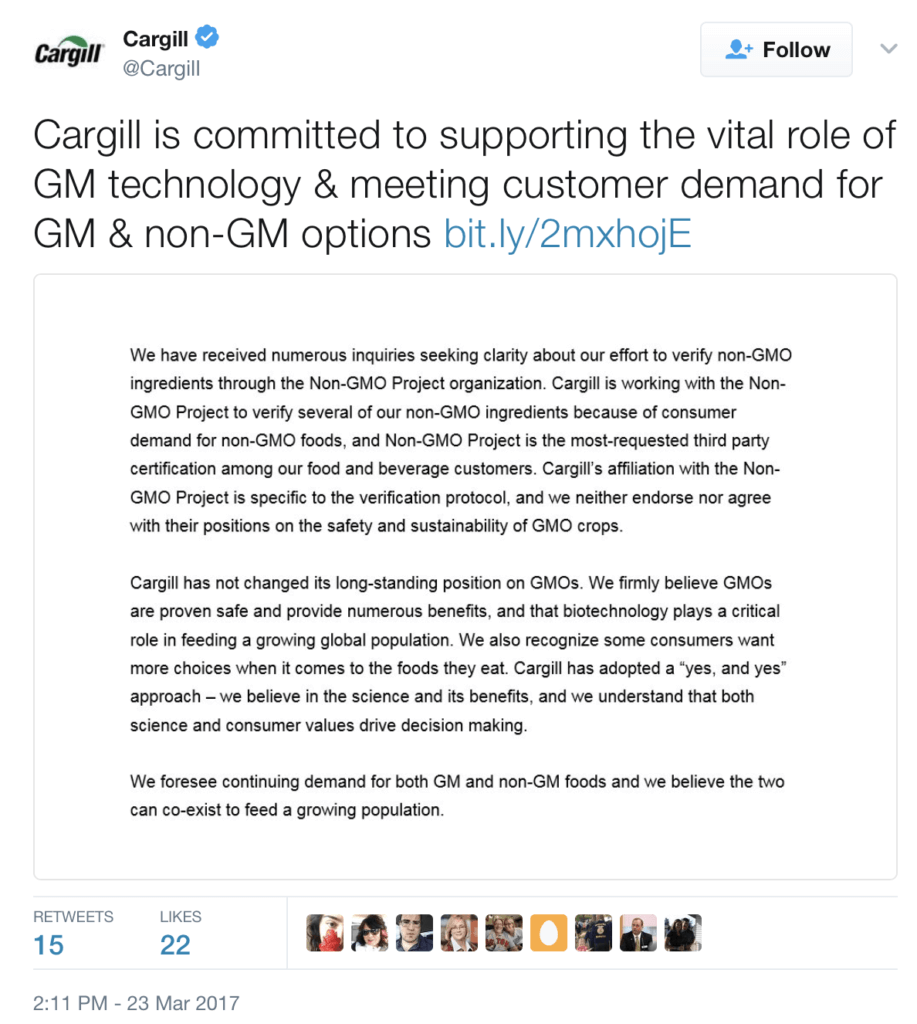 That post in turn created a backlash, as in effect Cargill acknowledged it was putting science aside and was adopting the label for purely marketing reasons, even if it confused consumers.

The requirements to attain non-GMO certification is even stricter than incorporated in the Vermont labeling law or instituted in Europe. That means many common products that use genetically engineered enzymes commonly used in the making of Vermont cheeses, popular beers and vitamin-fortified cereals cannot be certified under this label.

According to its website, as of April 2015, the Non-GMO Project had more than 29,500 verified products representing well over $11 billion in annual sales, sales of packaged produce with the group’s Non-GMO label in the 52 weeks ended June 14, 2015 grew 30 percent from a year earlier to $1.1 billion. Of the 33,000 newly launched products that market-research firm Mintel adds to its global database each month, 3.8% of food and beverage products included a GMO-free claim on the package last year, up from 1.6% in 2010. Many of them are certified by the Non-GMO Project. 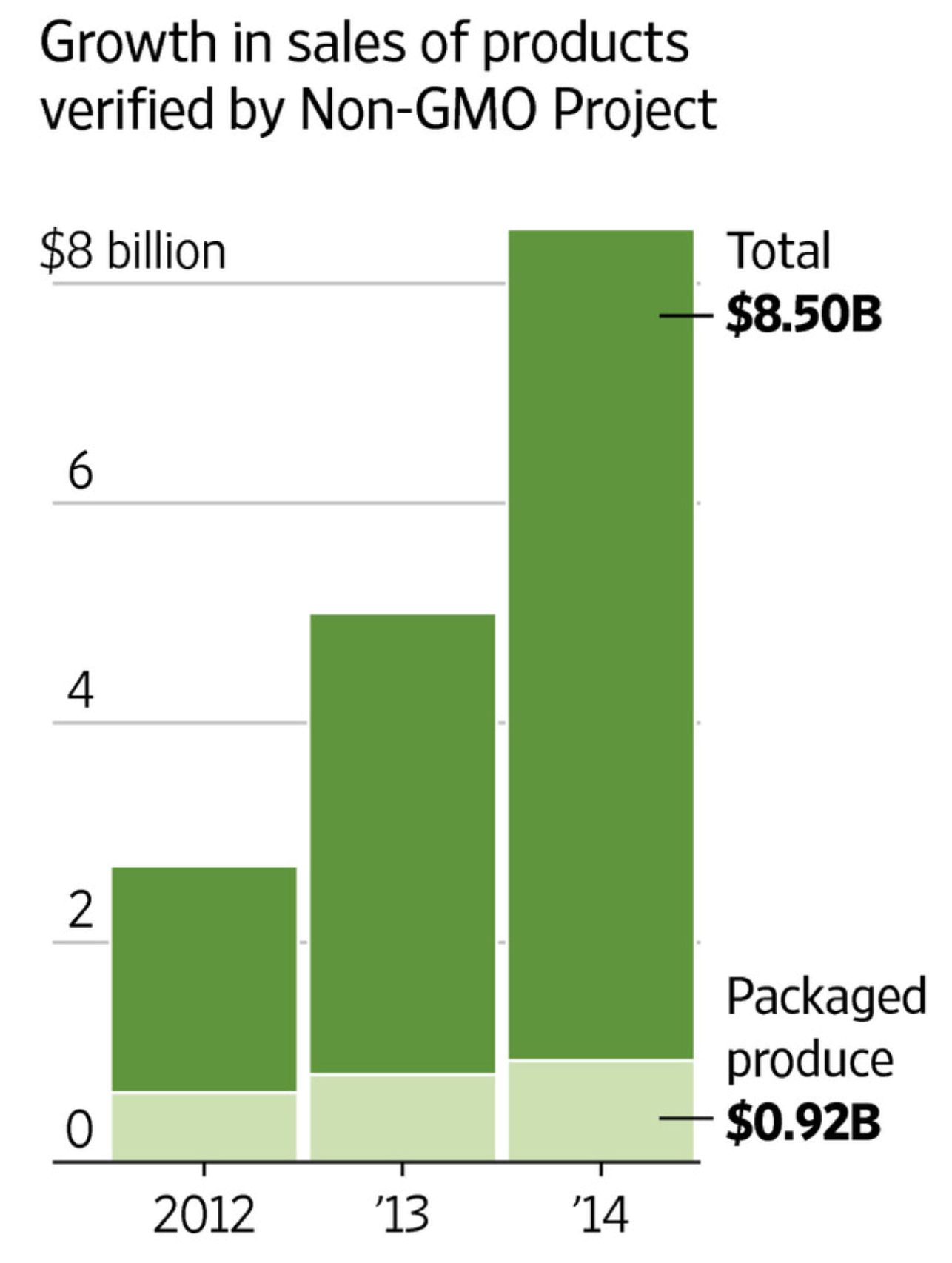 The organization has come under criticism, particularly from scientists, for labeling foods based on the method of production (i.e. genetic engineering), rather than on the final food product. The May 2016 National Academies of Science, Engineering and Medicine (NASEM) report on GMOs recommended that GMOs—and other crops altered via new breeding techniques like CRISPR—should not be evaluated or labeled based on the genetic modification technique. The NASEM report states that the U.S. regulatory system needs to assess crop varieties based on their individual characteristics, not the way they are produced.

These delicious grapefruit varieties are a textbook example of how crops were genetically modified back in the 1960s and ’70s using a method called “mutagenesis breeding.” Basically, seeds (or in this case pieces of budwood) were exposed to gamma radiation in substantial doses, and then sifted through to find ones with mutations to their DNA that had desirable qualities. 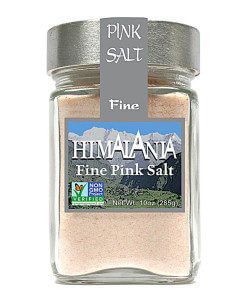 The project also certifies items, in particular fruits and vegetables, for which there are no GMO alternatives, which may mislead customers who often pay more for an informationally meaningless label. The organization offers its certification label to companies that produce products that contain no DNA, such as salt, as well as foods not intended for human consumption, like cat litter.

Some products have had to be reformulated to conform to the Non-GMO Project’s standards, resulting in a loss of nutrients.

The Non-GMO Project is a 501(c)(3) non-profit organization formally incorporated in 2007 and received IRS non-profit approval in 2008 (EIN 02-0799621). The organization began as an initiative of independent natural foods retailers in the U.S. and Canada,[2] with the stated aim to provide non-GMO labeling for products produced in compliance with their own Non-GMO Project Standard.[3] The initiative was inspired by and founding members who were affiliated with natural product lobbyist Craig Winters and his “Campaign to Label Genetically Engineered Foods” (a.k.a. “The Coordinating Council”) which also created and housed Jeffrey M. Smith‘s Institute for Responsible Technology.

It is supported by John Fagan, a Raja of the Global Country of World Peace with Global Responsibility for Food Purity and Safety and for Healthy Invincibility associated with the Maharishi movement in Fairfield, IA., and his company Genetic-ID, along with various organic and natural product company sponsors. Their work is supported by donations and fees paid by companies promoting non-GMO certified products. The group appears closely affiliated with the Maharishi movement in Fairfield, IA.[1]

According to Food Chemical News, two “natural” food retailers began to form the project, hoping to create a standardized definition of non-GMO.[6] The Project worked with FoodChain Global Advisors (a.k.a. Global ID Group – a consulting arm of the Genetic-ID Group created by John Fagan)[7] which provided the scientific and technical GMO testing expertise. In in the Spring of 2007, the project’s board of directors[8] was expanded to include representatives from additional groups, and formed advisory boards for technical and policy issues.[9]

The Non-GMO Project contracts with founding member Global FoodChain Advisors to provide verification and testing services, the costs for which are born by companies submitting products for non-GMO certification.[12] The for-profit FoodChain, not the Non-GMO Project, invoices companies directly[13] and a separate fee is paid to the Non-GMO Project for the licensing agreement to use the non-GMO logo on product labels and other marketing materials. FoodChain does not require testing of submitted products if company submitted paperwork meets standard guidelines. If testing or facility inspection is required, then FoodChain sister-organization Genetic-ID conducts such testing. No disclosures of this business relationship to the Non-GMO Projects’ founding board members and ongoing business relationship to FoodChain are found on their IRS 990 tax forms.

Dividing the pre 2016 $35 fee into the 2013 reported program revenue for the Non-GMO Project would be equal to evaluating 9,200 products (twice as many as the 20,000 product claimed on their IRS 990 tax return). Using the claimed 20,000 products verified, fees to FoodChain advisers would have been a baseline of $2.1 – 2.5 million, plus membership fees from more than 3,000 brands (brand $1.785M, plus other facility, testing and consulting fees. As such, Non-GMO project founders at the for-profit Global FoodChain advisers are collecting more than $4 million in fees annually – at a minimum, this is more than 10 times the verification services fees collected by their non-profit partner.

As of December 2017, total revenue from “verifying products” is estimated to exceed $100,000 annually, which is used in campaigns to frighten consumers about the safety of conventional foods. Heightened consumer fear drives more companies to pay for the Non-GMO Project label. This chart illustrates how ubiquitous the non-GMO Project has become, and how profitable it is to capitalize on people’s scientifically unwarranted concerns about the safety of GMO foods.

Nutritionists and scientists have noted that products reformulated to be able to earn the Non GMO label are sometimes less healthy than their GMO alternatives. In December of 2014, NPR Food and Agriculture correspondent Dan Charles took note that vitamins were stripped out of both Cheerios and Grape-Nuts were to accommodate the Non-GMO label:

When they actually arrived on supermarket shelves, though, there was a mysterious change in their list of ingredients. Four vitamins that previously had been added to Grape-Nuts — vitamins A, D, B-12 and B-2 (also known as riboflavin) — were gone. Riboflavin vanished from Cheerios.

Vitamins are essential as nutritional components and are indispensable for the maintenance of many metabolic processes. They are often inserted in foods to enhance nutritional content. An insufficient vitamin supply can lead to deficiency diseases. That’s created a large vitamin manufacturing market, including vitamins using genetic engineering.

There are various methods for production of vitamins: chemical synthesis, extraction from plants or herbal material–and biotechnological methods with the help of microorganisms. For example, some but not all companies are making vitamin B-12 and riboflavin using genetically modified microbes, and have published scientific papers showing how this can be done.

Many manufactured vitamins do not meet the Non-GMO standard. Additives that are produced in a closed system with the help of genetically modified microorganisms do not have to be declared, providing that the specific additive has been purified and contains no microorganisms. They are not labelled in any country in the world. But they do fall under the Non-GMO guidelines, prompting companies who have such products and desire the label to remove them.

Some vitamins are made naturally by bacteria and yeast, but manufacturers cannot always guarantee these microorganisms weren’t fed sugar from non-GMO sources. Furthermore, it is difficult to verify if the cornstarch vitamins are often mixed with for handling purposes is from non-GMO sources. Other ways to get non-GMO vitamins include getting them from other countries, like China, or creating them synthetically in a lab. However, these methods can be expensive and time consuming, and it is likely companies would rather drop the vitamins than deal with the added work.

These changes did not help consumers, noted Wayne Parrott, professor of crop science at the University of Georgia. “The new versions are certainly less nutritious. Here are the nutritional differences for both Cheerios and Grape-Nuts comparing the conventional versions with the Non-GMO versions: 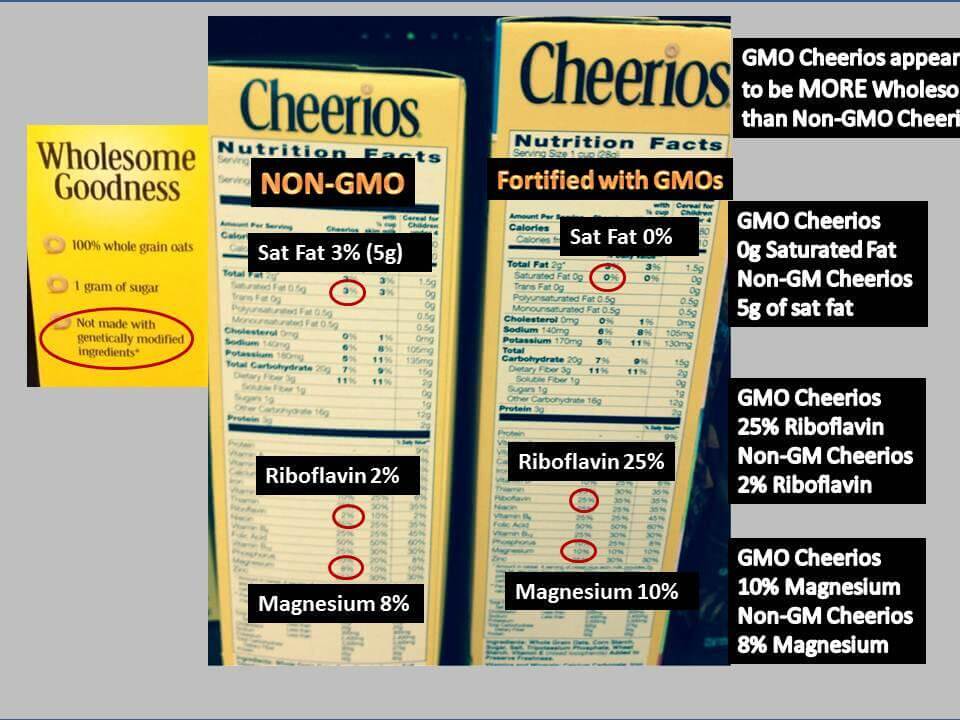 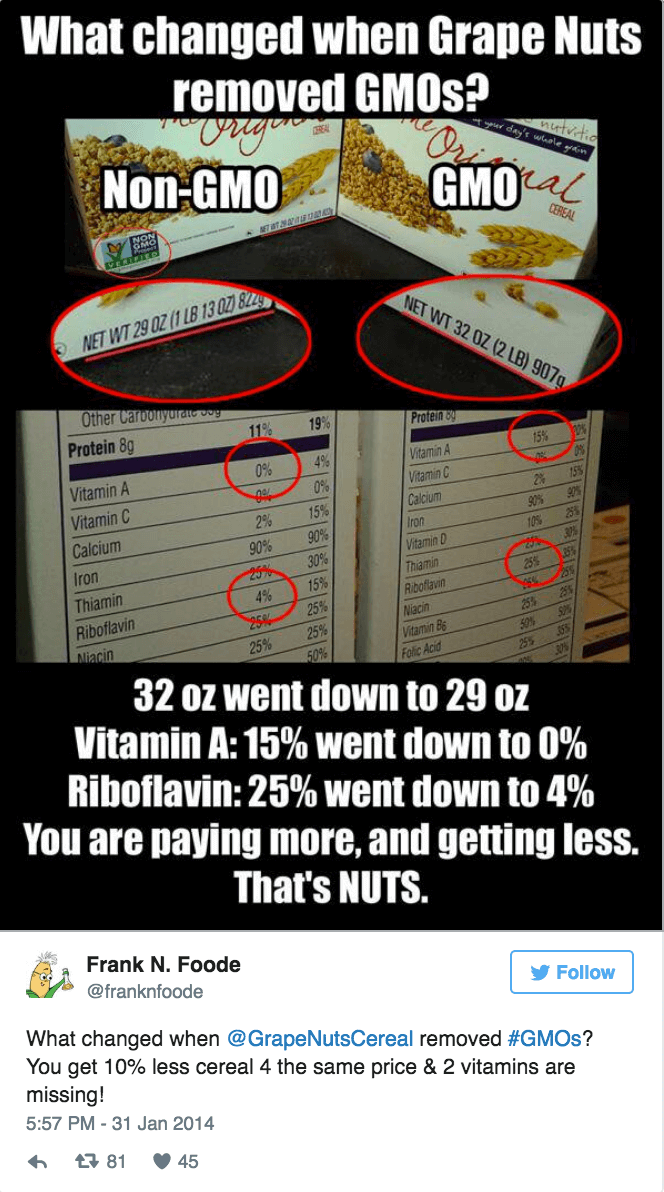 Some products forced to reformulate to gain the Non-GMO label have not only lose vitamins, they’ve become less cost effective. The price of Grape Nuts increased 10% on a per volume basis. Other examples show seemingly identical products with drastic price differences due to the presence of the Non-GMO Project label on the more expensive version. 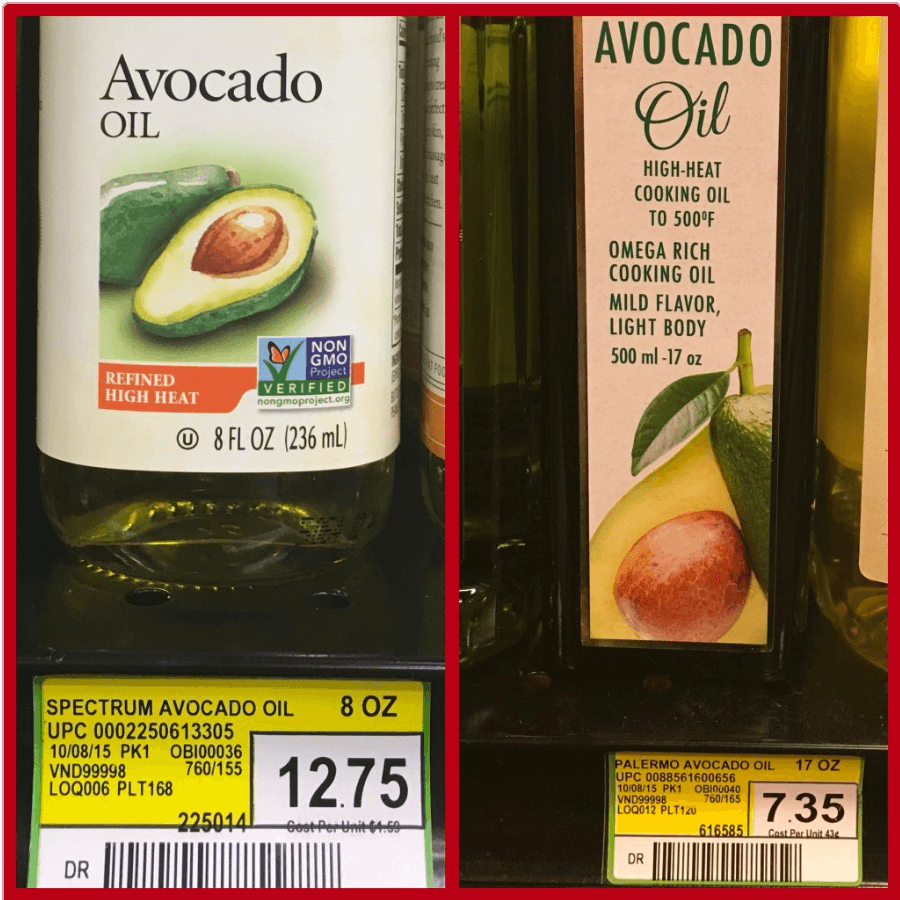 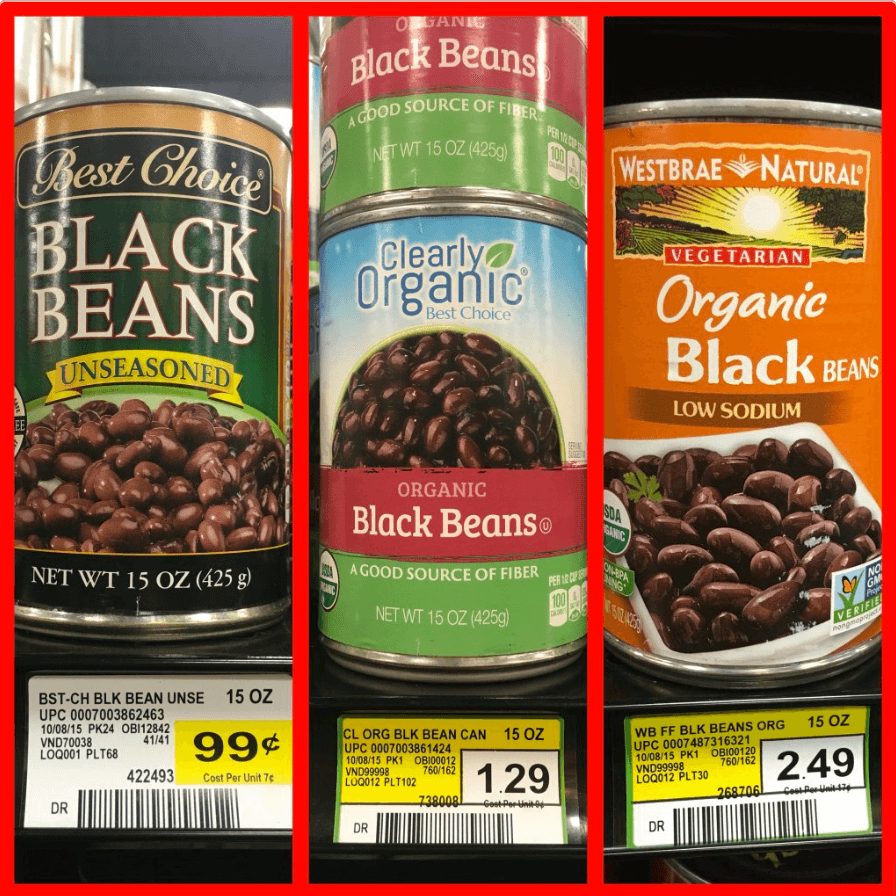 The Standard Committee exists to oversee development of the Non-GMO Project Standard.