Comparing the coronavirus pandemic to past pathogenic threats: HIV, anthrax and Ebola

Ricki Lewis | March 24, 2020
This article or excerpt is included in the GLP’s daily curated selection of ideologically diverse news, opinion and analysis of biotechnology innovation.

How does the COVID-19 pandemic compare to other infamous viral infections that have plagued us in modern times? It’s a question that’s been asked repeatedly in social media circles in recent weeks as people struggle to gain a better understanding of what we are facing.

Recently, I received an answer that was terrifying.

The subject was raised during a March 18 webinar featuring Dr. Anthony Fauci, director of the National Institute of Allergy and Infectious Diseases. He is the nation’s top infectious disease expert, who was described recently by the Washington Post as the “grandfatherly captain of the corona­virus crisis”.

Dr. Fauci was asked by the editor of the Journal of the American Medical Association to put the virus in historical context. His  response:

In my 40 years at the NIH, I’ve never seen anything like this. It is totally unique. We’ve been through emerging infectious diseases and in some cases crises, like we had with the anthrax scare back in 2001, Ebola virus, the early years of HIV, the scares of influenza pandemics. But nothing of this magnitude.

HIV evolved slowly, even though it turned out to be a terrible affront to human civilization, with a lot of suffering and death. Many other threats didn’t materialize here. Although there was a lot of concern about Ebola, there was never the serious concern of a widespread outbreak in the US, although there have been several devastating epidemics in African countries.

The comparison inspired me to look back at the US experience with HIV, anthrax, and Ebola hemorrhagic fever. (Influenza is covered here.)

I remember the beginnings of the HIV/AIDS pandemic well. I followed it through the Morbidity and Mortality Weekly Report, a small, square newsletter from the CDC that sparked many of my ideas as a fledgling science writer.

Nearly a year later, on May 11, 1982, as cases had quietly mounted, “New Homosexual Disorder Worries Health Officials“ ran in The New York Times. The article referred to “Gay-Related Immune Deficiency,” or GRID, a term circulating at the time.

When the MMWR ran “A Cluster of Kaposi’s Sarcoma and Pneumocystis carinii Pneumonia among Homosexual Male Residents of Los Angeles and Orange Counties, California,” on June 18, 1982, updating the past report, it didn’t use the offensive name.

Then on July 16, 1982, the MMWR reported 3 cases in people who had the bleeding disorder hemophilia who received blood pooled from many donors.

On January 4, 1983, CDC officials met with several disease organizations to discuss the blood supply as a route of transmission. And three days later, the MMWR reported AIDS in female partners of sick men. HIV was discovered in 1983, and in 1985, the US government began checking the blood supply for it.

A major reason for the delay in taking AIDS seriously was the marginalization of the originally affected population groups: in the terminology of the times, they were the 4 H’s: homosexuals, Haitians, heroin addicts, and hemophiliacs.

SARS-CoV-2 seems more an equal-opportunity pathogen. And the timetable is compressed.

The HIV/AIDS epidemic unfolded slowly compared to the blast of COVID-19. Getting to approximately 200,000 cases of HIV/AIDS worldwide took about 3 years, from 1980 to 1983. COVID-19 reached pandemic status in just 3 months.

Today millions of people still have HIV/AIDS, with about 1 in 7 (14% percent) unaware that they’re infected. The number of cases peaked in 1997, and is currently 40% lower.

Dr. Fauci recalled the anthrax-in-the-mail scare in the wake of 9/11 because the fear was similar to today. But anthrax is caused by a bacterium, not a virus, and it isn’t passed from person-to-person in aerosols or droplets, as COVID-19 is. Still, it’s interesting to revisit the terror of the time.

Anthrax affects mostly the skin and lungs, of sheep and cattle, although it was also the name of a heavy metal band from New York City in 1981. In people the severe purple skin sores gave it the nickname “wool-sorter’s disease.” Worse is “inhalation anthrax,” which causes nausea and vomiting, sweats, headache, fatigue, fever, body aches, confusion, dizziness, chest pain, shortness of breath, and pneumonia. 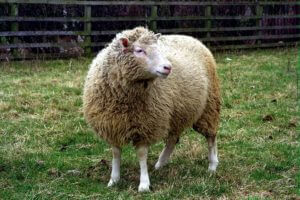 Fewer than 1,000 cases of anthrax are reported in the US annually, but it’s long been on the radar of those who investigate or worry about bioterrorism. According to the CDC, “Bacillus anthracis, the bacteria that cause anthrax, is one of the most likely agents to be used in a biological attack.” That’s because the hardy spores of the organism can easily pass in the air.

Seven days after the terrorist attacks of Sept. 11, 2001, anonymous letters laced with anthrax spores began arriving at media companies and congressional offices. Over the ensuing months, five people died from inhaling the spores and 17 others became infected from the exposure. Here’s a timeline of who was infected.

I wrote “Attack of the Anthrax Virus” in 2001 The Scientist:

“Americans are getting a crash course in microbiology. The delivery of anthrax spores with the daily mail took the U.S. populace completely by surprise. But anyone who has read Ken Alibek’s Biohazard, an account of bioweaponry in the former Soviet Union, or Richard Preston’s fictional The Cobra Event, could have predicted an attempt to subvert biology into weaponry in the wake of September 11.”

The media back then initially called the bacterium “a dangerous chemical,” “poison in the mail,” “fungal spores,” and “the anthrax virus.” And a Boston TV station continually played a cartoon of a dancing alga and paramecium, much to the hilarity of nerds like me.

After a delayed and protracted investigation that involved FBI Director Robert Mueller, a terrible false accusation, and finally pinning responsibility on a lone, disturbed scientist who killed himself, his involvement never definitively proven, the almost-anthrax event quietly went away. But not to the epidemiology community.

At the end of 2015, CDC published “Clinical Framework and Medical Countermeasure Use During an Anthrax Mass-Casualty Incident,” should the pathogen go airborne via mutation or genetic modification and dispersed over a city.

COVID-19, HIV/AIDS, and anthrax are nothing in the terror stakes compared to the potential devastation of Ebola hemorrhagic fever to the individual. But Ebola is so swiftly lethal that outbreaks tend to die out because so many people perish, especially in nations where people live in far-apart settlements. It has a 90 percent fatality rate.

I wrote in “How Ebola Kills,” posted during the 2014 epidemics in Africa: “And yet a 7-gene ‘infectious particle,’ so streamlined it isn’t even a cell, isn’t even alive, can reduce a human body to a puddle, inner barriers dissolving into nothingness, within days.”

Many people are familiar with Ebola from the excellent 1994 book by Richard Preston, “The Hot Zone: The Terrifying True Story of the Origins of the Ebola Virus,” which grew out of his 1992 New Yorker article “Crisis in the Hot Zone.” The story re-emerged as a 2019 mini-series from National Geographic, starring Julianna Margulies as Dr. Nancy Jaax, a U.S. Army Veterinary Pathologist. All versions tell the true story of the outbreak of a hemorrhagic fever at a monkey facility in Reston, Virginia, in 1989.

The fear and panic were real, but the Reston virus, although a relative of Ebola, turned out not to make people turn into puddles of blood. Still, when Ebola outbreaks began to pepper West Africa in 2014, thoughts turned to the deadly depictions early in The Hot Zone.

President Obama’s administration responded, realizing that the disease could come here too. Obama said on October 25, 2014:

See FACT SHEET: U.S. Response to the Ebola Epidemic in West Africa, for an example of how a government can respond early to a potential pandemic. 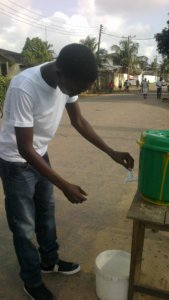 I experienced the African Ebola crisis through the eyes of Emmanuel Gokpolu, a young man my husband and I have been supporting since 2007. He grew up in Liberia and was a medical student there in 2014, until Ebola killed half of the faculty. He led other students in teaching public health measures, going house to house with clorox and gloves.

I chronicled his story here and here. Eman is now in medical school in Kenya and will soon be looking for residency or job opportunities, so any readers who might help, please get in touch!

HIV/AIDS, anthrax, and Ebola are nothing alike, but perhaps we can learn from our reactions to them.

From HIV/AIDS, we learned that viruses can enter a human body in different ways – and that biological fact unleashed discrimination that was more toxic than the infectious disease. People requiring blood transfusions learned, tragically, that a leader who delays action can result in deaths.

In “Stop Comparing Coronavirus to Early HIV/AIDS. Just Stop,” Mark S. King wrote: “To attempt to draw blithe comparisons – oh! This feels so scary and there are lines at the grocery store and people have to stay away from each other. Hey, does this feel like when HIV happened…? – is an insult to the bravery and sacrifice of the living and the dead.”

From the anthrax scare we learned that bioweapons exist, although they can come from one disturbed individual. But because a virus or bacterium could be a bioweapon doesn’t mean we can assume that it is happening.

Comparing genomes has revealed the natural underpinnings of the likely origin of SARS-CoV-2. It requires a supreme stretch of the science to label the virus a bioweapon or a lab escapee.

From the Ebola crisis we learned what can happen when a President understands and acts immediately on two “p” words: pandemic and preparedness. Instead, the current president foolishly disbanded the National Security Council’s unit focused on pandemic preparedness in 2018, denied recently being aware of having done so, and has repeatedly expressed shock and awe about the current situation, which epidemiologists and others have been predicting for years.

Fauci has emerged as the national leader, the voice of truth, knowledge, and reason. He said during the webinar for reporters last week, his speech taking on that curious cadence of trying to impart scientific facts while kowtowing to the narcissist who could silence him:

We see what it did in China and we’re seeing what it’s doing in Europe, particularly in Italy, and now it is here in the US. It shouldn’t panic or frighten us, but we need to realize we’re dealing with a serious problem that we must address in a very bold way. We’re starting to see at the federal, state, and local government mobilization to try to address the emerging threat. It’s quite serious.

Thank you, Dr. Fauci, for your leadership at this terrible time.