This article or excerpt is included in the GLP’s daily curated selection of ideologically diverse news, opinion and analysis of biotechnology innovation.
In the spring of 2015, with my colleagues at the Breakthrough Institute, I helped to organize and publish An Ecomodernist Manifesto. The manifesto was controversial in many environmental circles because it laid down a marker in its first paragraphs. To mitigate climate change and preserve the natural world while meeting the needs of a growing and increasingly prosperous human population, environmentalism would need to recommit to one foundational concept, the idea that environmental protection requires shrinking the footprint of human activity, while abandoning another, the notion that ecological salvation requires tethering human societies ever more closely to natural flows of energy and nutrients.

Reconciling environmental preservation with human development as the global population grew from 7 to 10 billion people, we argued, would require producing more, most especially food and energy, with less, particularly land and greenhouse gas (GHG) emissions. Without draconian restrictions on population, which most environmentalists now disavow, or consumption, for a global population that is mostly much poorer than are most card-carrying environmentalists, the math simply didn’t add up otherwise.

Today, green NGOs, those on the more pragmatic and less ideological end of the spectrum at least, are recognizing this as well. [In November 2018], the Union of Concerned Scientists (UCS) released a landmark report that softened its long-standing posture toward nuclear energy. [In December 2018], the World Resources Institute (WRI) released a comprehensive study embracing agricultural intensification as the only way to simultaneously close what it calls the food gap, the land use gap, and the greenhouse gas emissions gap.

“Increased efficiency of natural resource use,” the authors wrote in the opening paragraphs of the executive summary, “is the single most important step toward meeting both food production and environmental goals. This means increasing crop yields at higher than historical rates, and dramatically increasing output of milk and meat per hectare of pasture.”

Raising agricultural productivity through technological innovation, substantially faster than the historic rate of recent decades, will be necessary, they conclude, even if human societies are able to achieve historically unprecedented reductions in food demand and waste. The authors even call explicitly for increased funding for gene editing research to increase crop productivity — biotechnology, in other words. 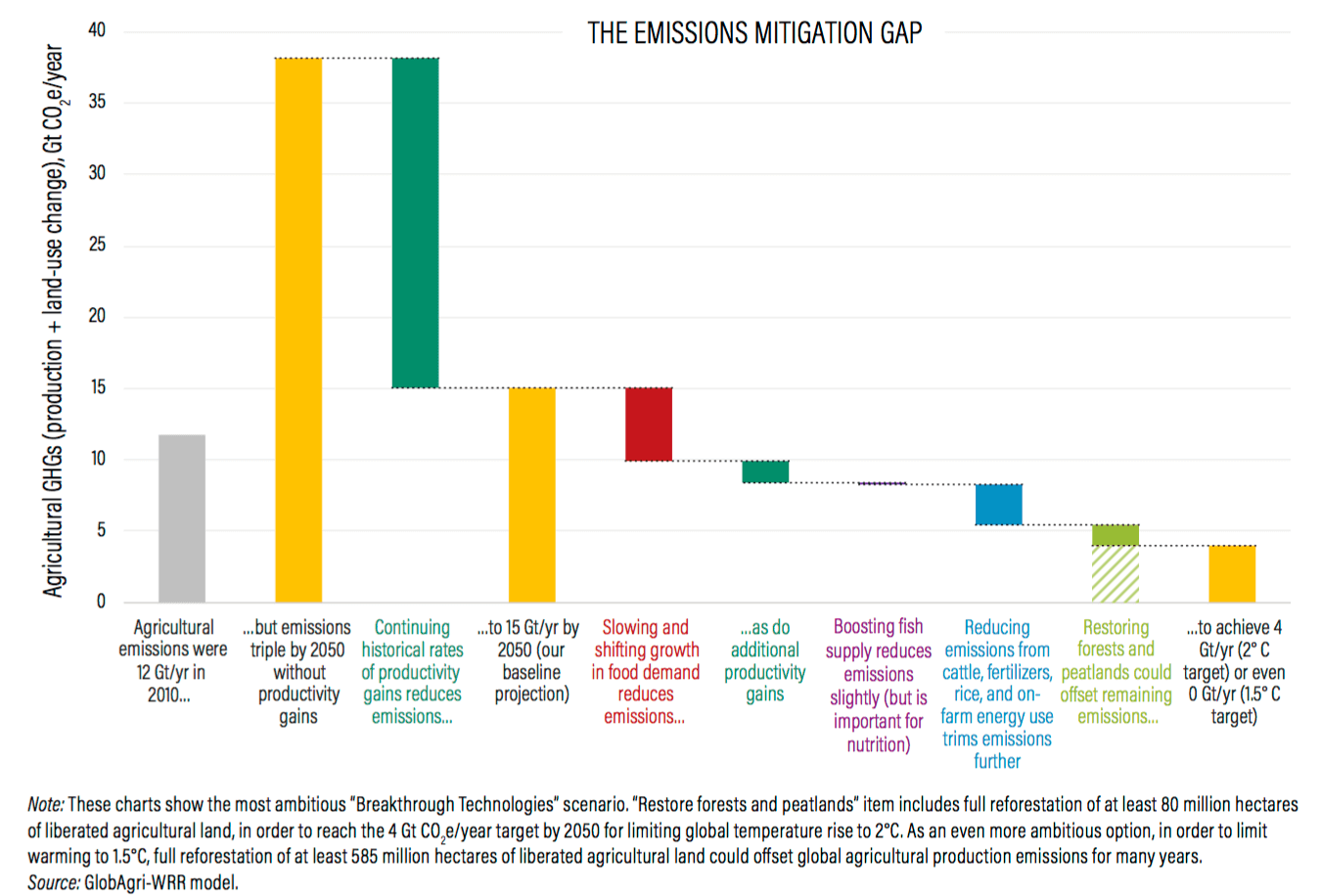 The WRI report is as notable for what it rejects as what it embraces. “Frequent claims that the world already has an overabundance of food and could meet future needs without producing more food are based on an unrealistic, even if desirable, hypothetical,” presuming, the authors observe, that the world “eliminates nearly all meat consumption; that people shift from meat to vegetables and legumes and consume the same high-yield crops now used for animal feed; that all food loss and waste is eliminated; and that food is distributed just enough and no more than to meet nutritional needs of every person in the world.”

The authors cast a skeptical eye toward so-called regenerative agriculture and soil carbon sequestration, which much of the environmental community has seized upon in recent years to justify continuing fealty to low-productivity organic and agro-ecological farming systems that underperform more intensive conventional systems by most environmental metrics.

The report finds that in most contexts, increasing carbon stored in soils requires exogenous input of nitrogen and that the actual carbon balance of agricultural and grassland soils over the long-term is not clear or well understood. “Soil carbon sequestration turns out to be harder and more uncertain than expected,” the authors note, and has, at best, “a limited and temporary role to play in achieving a sustainable food future.”

More remarkable still, the report makes not a single reference to organic farming. Throughout the report, the authors instead recognize the need to intensify agricultural production across the board. Preserving biodiversity and minimizing greenhouse gas emissions from the global agricultural sector is, at bottom, a fairly straightforward question of land use change. Given any remotely plausible level of food consumption over the coming decades, lower overall global agricultural productivity will result in greater land use change than higher productivity.

This relationship, between land use productivity and environmental impacts, governs the unforgiving math at the interface of agriculture and the environment. The various agricultural wholisms and naturalistic fallacies that many environmental voices offer as alternatives to intensive agriculture simply obfuscate that reality. “We wanted to avoid relying on magic asterisks,” WRI’s Tim Searchinger, the lead author, told The New York Times.

This is a problem that we at Breakthrough have long pointed out, much to the consternation of many environmental scientists and advocates, who would prefer to steer clear of what the anthropologist Steve Rayner has called “uncomfortable knowledge.” No, beef isn’t good for the planet, even if it’s raised on perfectly managed pastures. No, agro-ecological farms can’t replace the biodiversity we lose when we convert forests to farmland, even if those farms can host a bit more wildlife than a conventional monoculture farm. No, assuming away meat consumption or food waste in a model will not make it so.

The challenge of closing the food, land use, and GHG emissions gaps over the coming century will be hard enough as it is without promoting policies that can’t solve the problem and in many cases would make it worse. To their credit, WRI, like UCS on the question of nuclear energy and climate mitigation, took a hard look at the facts and the scale of the challenge and reached the obvious if difficult conclusion: one that deeply challenges long-standing environmental shibboleths about food and farming.

Ted Nordhaus is a leading global thinker on energy, environment, climate, human development, and politics. He is the founder and executive director of the Breakthrough Institute and a co-author of An Ecomodernist Manifesto. Follow him on Twitter @TedNordhaus

A version of this article previously ran on the GLP on September 6, 2019. It originally ran at the Breakthrough Institute (@TheBTI) and was republished with permission.