This article or excerpt is included in the GLP’s daily curated selection of ideologically diverse news, opinion and analysis of biotechnology innovation.
The present plague bedeviling us, COVID-19, though it obviously surprised some, was, in fact, completely unsurprising. It was clearly both entirely foreseeable and foreseen, in conspicuous detail, and we will no doubt experience similar events in the future, for which we will hopefully be better prepared. But thanks to an unprecedented galvanization of scientific power, we are gaining a more specific understanding of the virus and how to treat, manage, and prevent it and its cousins from wreaking similar havoc. Among these new insights we are learning more about the specific conditions under which such pandemics emerge.

The New York Times ran a story on April 9th reporting on a research paper that illuminates some of the conditions that increase the potential for pandemic eruptions. Unsurprisingly, the usual suspects are already abusing it to advance their pet causes, in this case arguing for more organic, inefficient, agricultural practices promoted under the term “agroecology,” that would actually make things worse. They do this, of course, by scapegoating modern “intensive” agriculture as the force driving the emergence of pandemics. These absurd claims turn the world on its head. 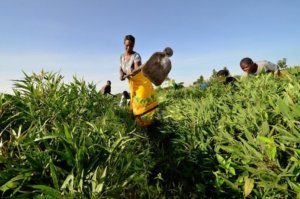 The research paper cited by The New York Times found deforestation and habitat fragmentation, particularly in Africa (the paper focused on Uganda), have increased the risk of zoonotic transmission—the spread of disease from animals to humans—of devastating viruses like the coronavirus, Ebola, and AIDS. The data seem compelling. The research shows that smallholder, subsistence farmers are the proximal agents for much of the deforestation and habitat degradation in tropical rainforests. These practices increase the frequency of intimate contacts between humans and wild animals of the sort we know has led repeatedly to undesirable consequences.

The usual advocacy and for-profit marketing suspects mentioned above blame modern, intensive agriculture and the technologies it employs. They visit particular wrath on GMOs and advanced pesticides, ignoring organic agriculture’s heavy reliance on “natural” highly toxic and environmentally destructive pesticides like copper sulfate, but also condemn the other drivers of the Post-War agricultural boom and Green Revolution, including synthetic fertilizer and hybrid crops, that have boosted yields and banished hunger throughout much of the world.

But the type of agriculture practiced by the smallholders described in the NYT article is famously inefficient, small scale, and unproductive precisely because it does not employ these modern technologies. Slash and burn, or swidden agriculture, is far more similar to the kinds of organic and indigenous farming these special interest ideologues advocate. The most optimistic and credible academic research by agroecology advocates acknowledges that the practices they promote produce yields that are 30 to 50 percent lower than conventional farmers.

Suppressing yields in this way will only increase pressures on natural habitats, forcing growing populations to clear ever more land to grow the crops to meet their basic nutritional needs. It will worsen both disease and climate risks based on simple math.

The indigenous agroecological farming methods advocated by many environmentalists today are “sustainable” only to the extent that they are used at a very small scale, in large areas of contiguous, native forest, which can quickly close in and heal the damage when the plot is abandoned as it becomes unproductive after a few years as the nutrients deposited in the soils by fire are depleted. This drives yields down, and impels the smallholders to move to the next plot; wash, rinse, repeat. When the numbers of humans practicing such agricultural methods are low, the plots small, and the forest huge, such practices can persist over hundreds, if not thousands of years without doing irreparable damage. But we no longer live in such a world.

Related article:  Viewpoint: Eating organic is a 'personal choice,' but pricier produce won't make you healthier
Follow the latest news and policy debates on agricultural biotech and biomedicine? Subscribe to our newsletter.
SIGN UP

These facts make the case that those interested in reducing the potential for zoonotic pandemics (i.e., all of us) should be staunch advocates for improving the productivity of smallholder agriculture. Epidemiologists, economists, and agronomists are natural allies in this regard. The best way to reduce the potential for animal viruses to jump to humans is to reduce human encroachment into their habitats. As The New York Times puts it, “In Uganda, a rapidly growing population means more people are carving out patches of forest land to feed their families… Large, healthy and diverse habitats with fewer borders on human populations would help, the researchers said, coupled with economic development so that families would not have to take over forest land for subsistence farming.”

While it has become fashionable among many in the First World to extol subsistence farming and “peasant agriculture” in the belief that this is somehow more virtuous, authentic, or “natural,” it is not the life struggling farmers in the developing world choose for themselves. Wherever governments have allowed them the freedom to choose what seeds they will plant or the methods they will employ, the vast majority choose the most advanced, modern, and efficient inputs they can afford, including modern pesticides and GMOs. A significant number, in fact, choose to defy government restrictions and plant GMOs even without legal approval.

As COVID-19 spread around the globe, most people turned to science for answers, and governments invested massively in programs to accelerate research to develop new therapeutic drugs and vaccines (many of the most promising produced with advanced genetic engineering). There were no apparent mobilizations to mass manufacture homeopathic and natural herbal remedies to protect ourselves from this all too natural epidemic.

As a society, we understood that the solution lay in more innovation, not less; more progress, not retreat into romantic fantasies of a past in which plagues much worse than COVID were the common companion of near-universal malnutrition.

The same is just as true for agriculture. Science and technology are the solution, not the problem. They are the truly green way to feed and clothe humanity while reducing the risk of emergent pandemics.

On the other hand, crops improved through biotechnology have a strong record of reducing inputs while increasing yields, sustainability, and farmer profitability in a manner fully consistent with the stated aims of organic production, if not the blind dogma pushed by some of its adherents. There is no greener way to feed and clothe humanity while reducing the risk of emergent pandemics.

Val Giddings is a senior fellow at the Information Technology and Innovation Foundation (ITIF). Giddings received his Ph.D. in genetics and evolutionary biology from the University of Hawaii in 1980. Val can be found on Twitter @prometheusgreen

This article was originally published at the Information Technology & Innovation Foundation and has been republished here with permission. Follow ITIF on Twitter @ITIFdc.