Viewpoint: Busting nutrition myths—Why you don’t have to cut potatoes out of your diet

“Stop cutting out white potatoes – they’re as healthy as sweet ones, dietitians say,” a recent headline in Insider urges us.

That gets a big hooray from me.

Forgive my conceit but I cook the best roast potatoes (a British culinary delight) just about anywhere on these shores. Ask my husband.

But the nutrition police don’t approve. According to an article darkly entitled “the problem with potatoes” on the Harvard T.H. Chan School of Public Health website, a cup of potatoes has a similar effect on blood sugar as a can of cola or a handful of jelly beans. Moreover they claim that “this roller-coaster-like effect on blood sugar and insulin can result in people feeling hungry again soon after eating, which may then lead to overeating.”

Wow, that’s quite the set of accusations, especially when sweet potatoes, which have almost identical levels of carbohydrates and calories are often lauded as exemplars of nutritional excellence.

The disdain for standard spuds hinges on the fact that they have a high glycemic index, or GI. 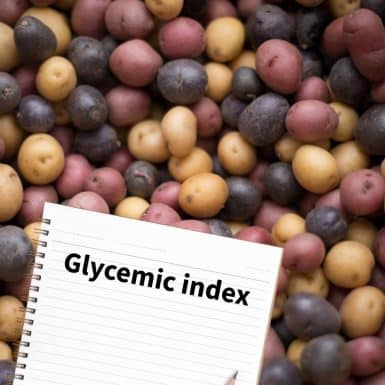 GI measures how rapidly a food increases a person’s blood glucose. A global database of GI values is maintained by Sydney University Glycemic Index Research Services in Sydney, Australia. GI is measured relative to glucose (GI 100) under fixed conditions that  don’t relate very much to how we actually eat foods in mealtime combinations.

According to the above mentioned database, sweet potatoes have a GI of anywhere between 44 and 95 depending on the exact variety and method of preparation, whereas a serving of North America’s most popular potato, the Russet Burbank, registers GI values of between 56 and 111. As you can see, there’s not a whole lot of difference between the two.

There’s modest evidence that eating foods with a higher GI might leave you more vulnerable to snack attacks. For example it’s been shown that after a high glycemic index meal, there’s more activity in the area of the brain associated with craving and reward than after a low glycemic index meal.

When overweight, otherwise healthy, individuals consumed breakfasts with the same energy content but varying carbohydrate to fat ratios, people also felt hungrier after the higher carb meal, which correlated with an earlier and higher peak in blood glucose.

But though high GI is generally a rough proxy for a less nutritionally-dense source of carbohydrate, that’s not the case with potatoes.

To equate them with soda or candy is nonsense because, healthwise, they are very different.

Related article:  Obesity is in our head and in our genes

A medium (285g) baked potato eaten with the skin has 265 calories, 7.1g protein,  60g carbohydrate, and 6.3g of fiber along with 1520mg potassium,  79.8 μg folate and 27.4mg vitamin C. These are really meaningful amounts of nutrients that have roles to play in maintaining a healthy digestive and immune system, as well as normal blood pressure. (For the record, sweet potatoes have more vitamin C, fiber, vitamin A and E, but less potassium and folate.)

The theory that a high GI makes potatoes poor at curbing hunger simply doesn’t stack up any way – far from it. In fact based on the Satiety Index, which rates foods based on how full people still feel two hours after eating them, boiled or baked potatoes are the most hunger-curbing of the lot. With a score of 323 they rate over three times more satiating than white bread, with a reference score of 100.

In another study published in the Annals of Nutrition & Metabolism potato-based side dishes were more effective at blunting appetite than bread and pasta sides, though there were no differences in subsequent calorie intake at the next meal.

Pile High at Your Peril

On the not so bright side, a study in the journal Diabetes Care found that after adjustment for demographic, lifestyle and dietary factors, long term high intake of potatoes and French fries was linked to a greater risk of diabetes in women. Replacing  potatoes with whole grains, which as a general rule have a lower GI, lowered diabetes risk.

Common sense will tell you portion size, method of preparation and frequency of potato consumption is what matters. Regularly eating oversize quantities of any fried starchy carbohydrate  – which would include sweet potato as well as standard  fries – is almost certainly to have health downside.

But if you don’t eat them every day, and avoid super-sized portions, spuds are far from nutritional duds.

Which is why there will be some irresistibly crispy roast potatoes coming out my oven this Sunday.

Angela Dowden is a British award-winning health journalist and registered nutritionist with over twenty year’s experience. Follow her on Twitter @DietWrite

This article was originally published at the American Council on Science and Health and has been republished here with permission. Follow ACSH on Twitter @ACSHorg