This article or excerpt is included in the GLP’s daily curated selection of ideologically diverse news, opinion and analysis of biotechnology innovation.
Even before Jurassic Park became a staple of pop culture in the early 1990s, geneticists have been on the hunt to find preserved dinosaur DNA. With a quick search online, you’ll find a handful of studies published in peer-reviewed journals claiming to have recovered DNA from dinosaur fossils or other preserved prehistoric specimens. The latest such paper was published in the journal National Science Review back in January.

Though far from conclusive, the research reignited a debate over how long prehistoric DNA can survive, and added to a growing body of evidence showing that it may be possible to bring extinct species back to life.

Making a dinosaur in 3 easy steps?

According to the Jurassic Park novels and movies, the recipe for making a dinosaur is simple enough. All it takes is a Jurassic mosquito that fed on a dinosaur before it got trapped in a substance like amber. The bloody lunch can then carefully be removed from the mosquito, the DNA extracted, sequenced, and any essential blanks filled in with equivalent genes from modern day relatives. With the dino genome completed, and after a few more steps to condense the DNA, it can be implanted into an unfertilized donor egg cell to grow into a ferocious monster or gentle giant.

While the simplicity of the process is essential for the plot of Jurassic Park, finding well-preserved prehistoric DNA is a complicated and hotly debated topic. In the 1990s, several papers reported DNA extraction from a 120-135 million-year-old weevil and out of leaf tissue from a 40 million- year- old extinct tree trapped in amber. Unfortunately, the validity of the findings was called into question when other researchers failed to replicate the results in similar experiments.

Later in 2013, this topic was revisited using more powerful modern instruments and more recent subjects trapped in copal – an intermediate stage in resin hardening into amber. But they too were unable to find convincing evidence of preserved DNA. Instead early findings were likely contaminants or artifacts of the extraction or amplification process.

The problem with DNA

At the time Jurassic Park was released, ideas of prehistoric DNA preservation seemed limited to materials like amber. Back then, fossils weren’t really considered potential reservoirs of DNA since the process of fossilization involves soft tissue decaying, leaving only harder components like bones and teeth. Even those harder materials eventually lose their original composition as old minerals dissolve and are replaced by new ones.

Soft tissue preservation wasn’t widely accepted until Mary Schweitzer and Jack Horner, the the inspiration for Dr. Alan Grant in the Jurassic Park films, identified what looked to be the remnants of blood cells in a T-rex bone. Since then, additional soft tissues like osteocytes, blood vessels, and collagen have been recovered from fossils.

But even if some soft tissue can survive, would DNA also be able to last? In 2012, this question was tested by researchers who took 158 bones between 600 and 8,000 years old to identify the rate of DNA decay. While specific environmental conditions affect the rate of decay, the researchers concluded from their samples that DNA has a half-life of 521 years. In other words, half of the bonds holding DNA together will be broken after 521 years, three quarters after 1042 years, and so on. For dinosaur bones, this means that there should be nothing left besides potential remnants of individual nucleic acids.

And yet despite the purported half-life of DNA, Dr. Alida Bailleul and her colleagues published a study in January 2020 indicating the team had found some preserved DNA. The group was studying calcified cartilage in 75 to 67 million-year-old fossils of Hypacrosaurus stebingeri when they identified structures within the cells which were indicative of nuclei based on shape and location. When the cells were isolated and stained with either propidium iodide (PI) or 4′,6′-diamidino-2-phenylindole dihydrochloride (DAPI), both of which bind to double stranded DNA, they found faint yet specific staining indicating the presence of DNA.

Based on the specific localization of the signal and the lack of cell clusters indicating microbial infiltration, the team concluded that contamination was unlikely to be the source of DNA. They hypothesized that cartilage may be better suited to preserve DNA due to its non-porous nature and hypoxic internal environment. 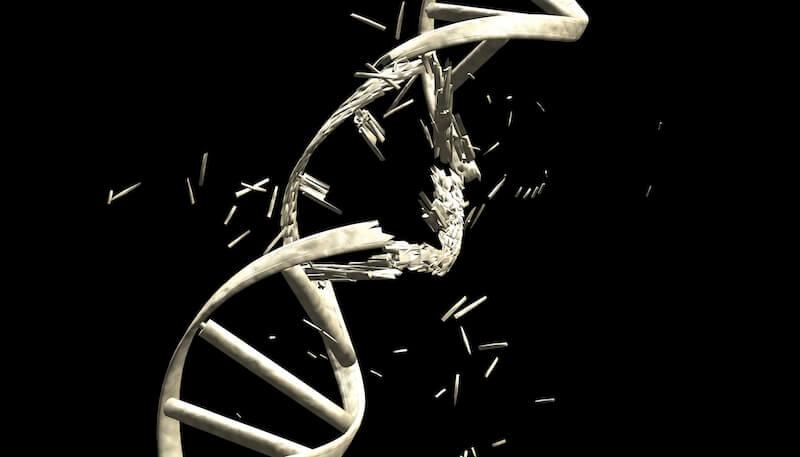 Whether or not the DNA is actually from Hypacrosaurus stebingeri will be very challenging to confirm. To identify if the reported DNA is genuine, it would have to be sequenced. But if the DNA is too highly fragmented, the pieces may be too short: DAPI and PI staining only indicate the fragments are a minimum length of six base pairs. These findings show that the debate surrounding DNA preservation is not over and more work is needed before we fully understand the characteristics of the molecules that make life possible.

We may never find sufficiently preserved DNA to bring back dinosaurs as written about in Jurassic Park, though that doesn’t mean extinction is the end. The last Pyrenean Ibex died in 2000, but the species was brought back from extinction temporarily in 2009 when a clone of the species was born. Unfortunately, the clone died minutes after birth due to a lung infection. Still, the experiment showed that it may be possible to reintroduce lost biodiversity through de-extinction efforts.

As of 2018, there were a total of seven documented de-extinction initiatives. Unlike trying to clone dinosaurs, the candidates for de-extinction all have either preserved cell samples, complete DNA sequences, or closely related living relatives that can be bred back or gene edited to an ancestral target species. Jurassic Park might remain entertaining fiction, but a Pleistocene Park or Zoo of Yesteryear could be a reality in the coming years.