In an open letter slammed by Impossible Foods as cynical and disingenuous and dismissed by one commentator as a “PR stunt,” Lightlife Foods has attempted to distinguish itself from ‘food tech’ rivals in the plant-based meat arena by positioning itself as “a real food company,” with products “developed in a kitchen, not a lab.”

The letter, published in The New York Times and other high-profile publications is addressed to Beyond Meat and Impossible Foods, and signed by Lightlife Foods president Dan Curtin. 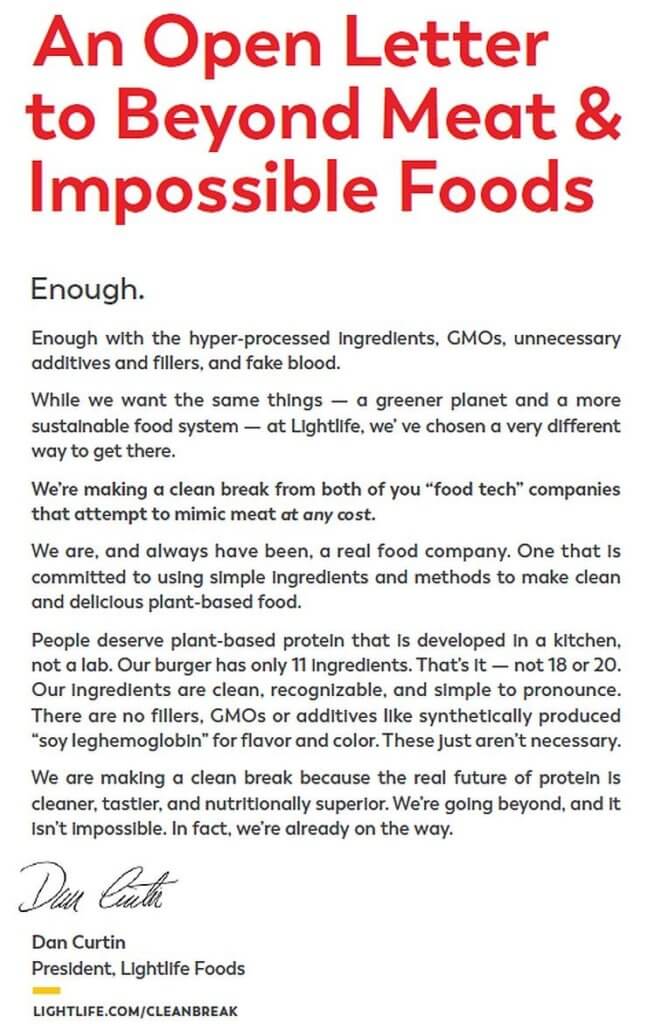 Beyond Meat, whose flagship Beyond Burger​​ has a similar set of ingredients, the same amount of protein (20g) and saturated fat (5g), more fiber and less sodium than the Lightlife burger, expressed surprise at being called out in the letter, which primarily takes aim at ingredients (soy leghemoglobin, GM soy) used by rival Impossible Foods.​

Related article:  Analysis: Is COVID-19 a blessing or a curse to Africa?

A spokesperson told FoodNavigator-USA: ​ “If Lightlife were clear on our ingredients, they would see that our food is made from simple, plant-based ingredients.”

Impossible Foods, meanwhile, said judging the merits of a food product based on the number of ingredients it contains and whether the average consumer can pronounce them was lazy and unscientific, and slammed the letter as a “disingenuous, desperate disinformation campaign attempting to cast doubt on the integrity of our products.”​