This article or excerpt is included in the GLP’s daily curated selection of ideologically diverse news, opinion and analysis of biotechnology innovation.
Alternative health guru and conspiracy theorist Mike Adams, founder of the popular website Natural News, has been identified as the mastermind behind “a complex web of social media and website infrastructure used to create, promote, and target health and political disinformation,” according to a just-released investigation conducted by the Institute for Strategic Dialogue (ISD).

The global think tank, dedicated to combating “polarization, hate and extremism,” focused on a nearly three-month period beginning in January 2020, when the novel coronavirus started its rapid spread across the world, accompanied by a host of conspiracy theories. 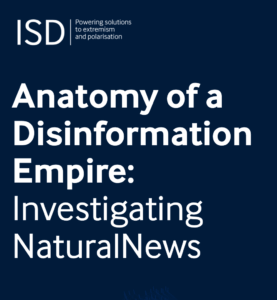 The report offers a searing analysis of how extremists on the left and right—Adams promotes a bizarre mix of fringe ideas drawn from both ends of the political spectrum—are abusing social media and undermining social cohesion. Natural News, ISD suggests, may be the largest coordinated disinformation network in the world, perhaps outside of Russia, with 21 fake news outlets (down from more than 45 four years ago):

The complex web of infrastructure surrounding NaturalNews is vast. Its activities remain largely unchecked on social media sites, where it finds platforms to proselytize. Despite being banned from Facebook in 2019 and again in 2020, NaturalNews has continued to post on branded Facebook groups and appears linked to a network of over 400+ affiliated domains, including domains promoting extremist and violent material. In May 2020, Facebook banned posts with links to NaturalNews. com, NewsTarget.com, and Brighteon.com, all of which appear to be owned and run by Natural News and its founders.

Disinformation across a range of issues

Over the nearly three-month period, Adams’s online infrastructure generated almost 100,000 likes, over 327,000 shares, and more than 33,000 comments—even after Google News, Apple, YouTube, Pinterest, and Twitter permanently banned him. Facebook only temporarily kicked Adams off its platform in 2019, but made the ban permanent in 2020, blocking all outbound links to known Natural news sites. Adams addresses an array of controversies flaming across the internet, according to publicly available data on the 10 most-shared articles from NaturalNews domains: 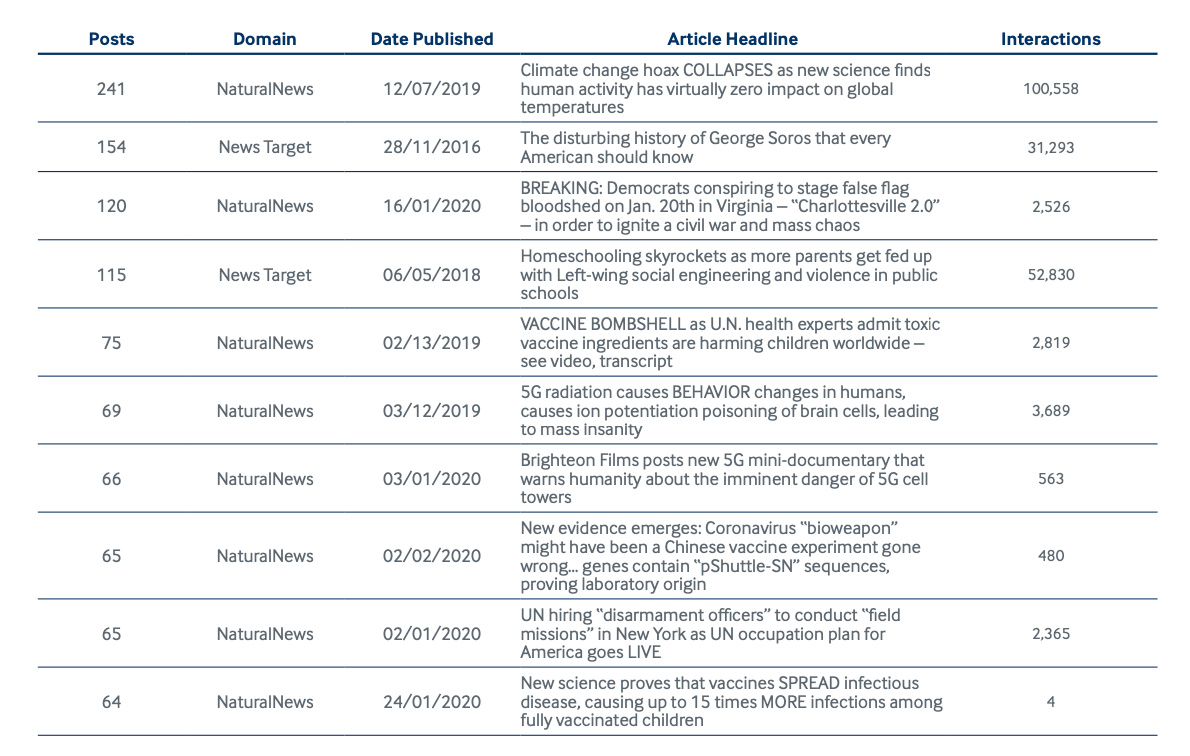 Natural News’ oversized presence underscores how difficult it has become for social media companies to moderate their vast and expanding networks, despite increased policing. ISD found much of the disinformation on various Facebook pages, noting that the platform hasn’t been able to keep up with popular purveyors of disinformation, who are skilled at evading efforts to shut off the spigot:

The reactive game of cat and mouse that companies currently rely upon to reduce the potency of such networks has proven inherently limited when dealing with vast networks of interconnected and long-established domains like NaturalNews. While the accounts, pages and groups used to host and promote the NaturalNews network have begun to disappear as researchers and companies have started to understand the scale of the NaturalNews operation online, the policies and actions of companies dealing with outbound links to known disinformation and extremist domains remain.

How does Adams do it? After he was banned by Facebook, Natural News established a private “NaturalNews Supporters” group. With just 390 members, it exists primarily to share content from Adams’s websites and other conspiracy theory outlets. The group coordinated with several Facebook pages including “GMO Dangers,” “Amazing Cures,” Food Freedom” and “No Fluoride”—all of which had the same administrators—to subvert Adams’ ban.

In all, ISD identified 15 Facebook groups and pages—seven public pages and eight public groups—which shared links to Natural News-affiliated domains more than 50 times in three months. These 15 groups and pages shared a combined total of 9,097 links and accounted for 52% of the links shared during the period of analysis. 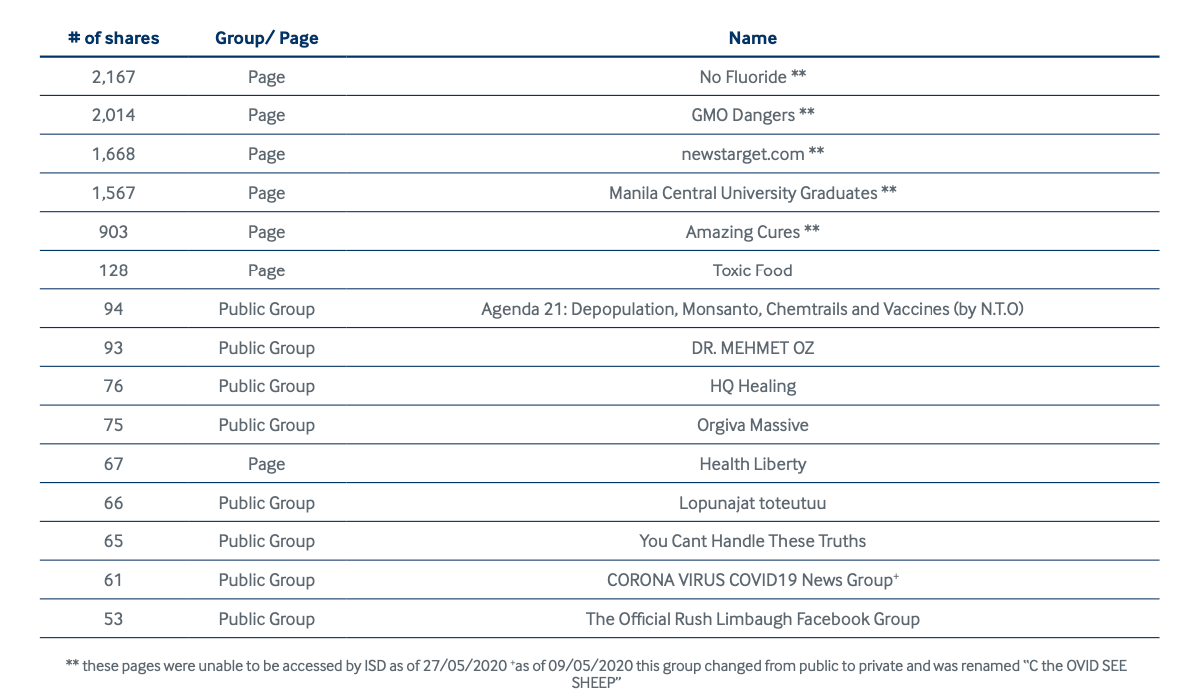 One admin in the private support group boasted about the network’s collective success—particularly an effort to promote foreign-language versions of a heavily criticized COVID-19 documentary called Plandemic, which has become a favorite disinformation vehicle among conspiracy groups.

Four of the pages in Adams’s disinformation “empire” have since been removed, though other affiliated Facebook pages have developed new tactics and so far evaded the company’s censors. “Unlike the other pages, which were detected and banned,” ISD noted, “these pages do not link directly to the NaturalNews domain. Instead, they circumvent bans by linking to many masking domains which promote and repost NaturalNews content.” 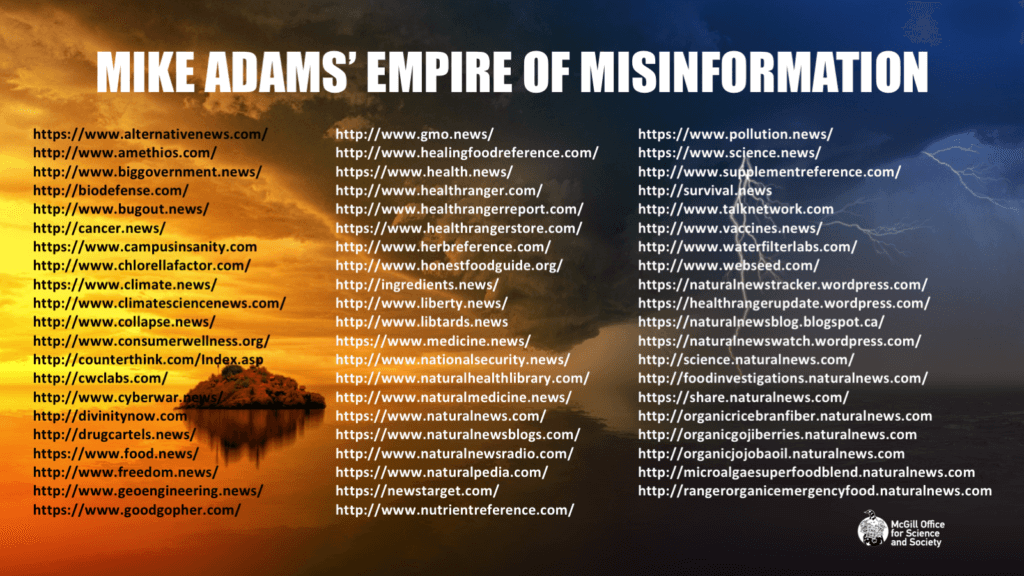 A history of disinformation

Adams has turned disinformation into a career. An ardent critic of mainstream science, he has promoted a host of medical and political conspiracy theories such as HIV/AIDS denialism, 9/11 truth and Barack Obama citizenship “birther” claims. Adams has likewise rejected climate change science, water fluoridation and advanced chemotherapy and cancer gene therapy.

Adams claims flu vaccines and childhood immunizations are serious health threats, and has emerged as a fierce critic of any potential coronavirus vaccine. But he’s most notorious for his intense opposition to agricultural biotechnology. Calling the entire field “murder by science,” Adams has warned that crops grown from genetically modified seeds threaten all life and will cause “ecocide” across the plant. This rhetoric appears to be part of his standard promotional strategy: stir up safety concerns about common foods and medicines, then sell alternative “remedies.” 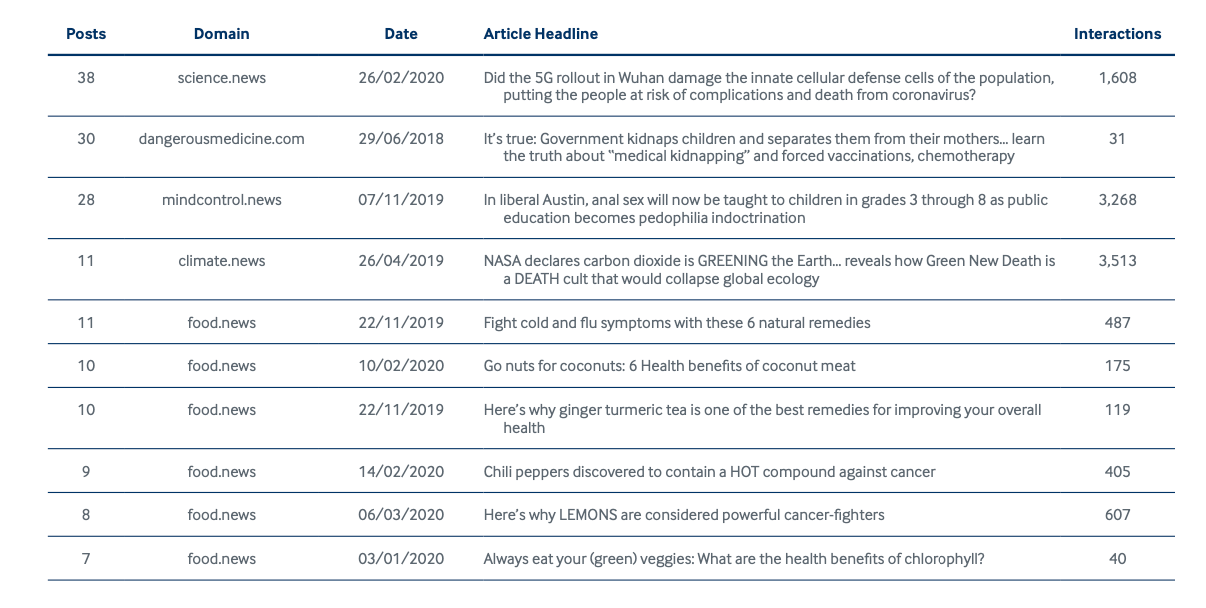 The vast network of Natural News sites are the foundation of an online marketing juggernaut through which Adams advertises an array of organic products, supplements and vitamins—many of them unproven or known to be dangerous—as well as cookbooks, nutrition guides and other publications focusing on alternative health. Adams cross-posts content with other alternative health influencers and organic food proponents, notably Dr. Joe Mercola and anti-GMO conspiracy activists Jeffrey Smith and Ronnie Cummins, head of the Organic Consumers Association, which funds anti-biotech groups such as US Right to Know (USRTK). Both Natural News and USRTK are notorious for parroting Russian talking points on crop biotechnology.

Adams has even threatened violent retribution against those who challenge his views, including the Genetic Literacy Project, and has asked anti-GMO activists to kill scientists and science journalists. “It is the moral right — and even the obligation — of human beings everywhere,” he wrote in 2014, “to actively plan and carry out the killing of those engaged in heinous crimes against humanity.” The post, titled “Biotech genocide, Monsanto collaborators and the Nazi legacy of ‘science’ as a justification for murder,” featured this graphic: 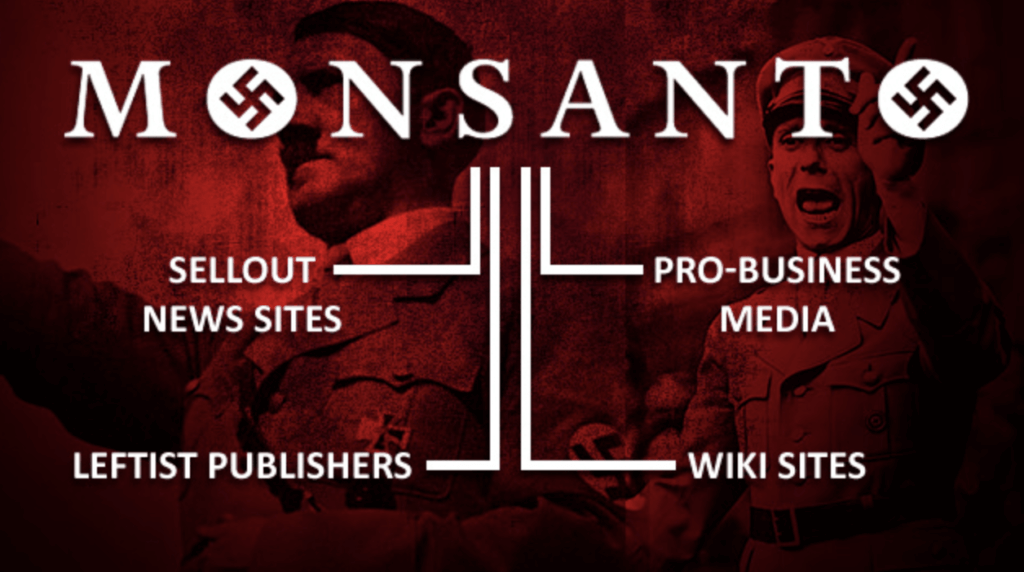 The Daily Beast published an investigation sharply critical of Adams and his Natural News website, echoing research posted on the Genetic Literacy Project since 2014. After Facebook initially banned his main site, Adams issued a vituperative response, claiming he was the victim of a “coordinated, heavily-funded smear campaign” by “techno-facists.” The self-proclaimed Health Ranger posted a Natural News-designed graphic that equated Adolf Hitler, Joseph Stalin and Mao Zedong, among other dictators, with Mark Zuckerberg, Jeff Bezos, Tim Cook and other heads of major technology companies. 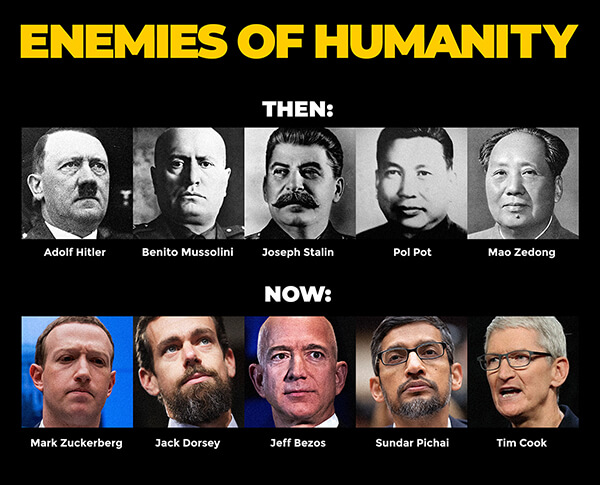 Summing up its findings, ISD outlined the threat posed by figures like Adams if allowed to freely promote unsubstantiated scientific claims and outright falsehoods to a mass audience on social media:

ISD’s research demonstrates the significant infrastructure and perseverance of disinformation purveyors who seek to spread harmful and false information. It also shows the as yet unmet challenge that has been placed at the foot of social media companies to stop their platforms from providing these actors with a loudspeaker to reach hundreds of thousands of people …. The breadth and scale of NaturalNews’ network both on social media and the surface web serve as a useful guide to understanding the capabilities of those seeking to misrepresent and mislead.