The U.S. Right To Know (USRTK) was founded in 2014 and formally launched on January 20, 2015 by former Yes on Prop 37 (mandatory GMO labeling ballot measure in California) campaign manager Gary Ruskin and media director Stacy Malkan with seed money from the Organic Consumers Association.

Its donor list includes organizations well known for supporting fringe medicine and activist causes. As of September 2017, the backbone of its funding came from the Organic Consumers Association, which has contributed $479,500. OCA is an anti-technology group that opposes genetic engineering and vaccines, and promotes alternative medicine, such as homeopathy. Other donors include Dr. Bronner’s Family Foundation ($133,000) and the Westreich Foundation ($17,500), both of which promote “alternative medicine” initiatives.

USRTK operates under the tag line “Exposing what the food industry doesn’t want you to know” and engages in anti-corporate attacks on agribusiness, the food industry and their supporters alleging unethical, lobbying and political influence on issues linked to GMOs, pesticides, sweeteners, and marketing to children.

As of September, 2015, URTRK had sent Freedom of Information Act (FOIA) demands to more than a dozen public universities, targeting more than 40 scientists and science advocates, including Kevin Folta, Bruce Chassy, Richard Goodman and Jon Entine. According to mainstream scientists and many social scientists and journalists, the USTRK is using FOIA requests–each state has its own version echoing the federal law–to harass and intimidate scientists.

Ruskin acknowledges that is his goal. “The records disclosed … will be used in preparation of articles for dissemination to the public,” according to the text of one record request obtained by Science Insider. But Gary Ruskin, USRTK’s executive director, put a blunter point on it when he told the Insider that the group is “especially looking to learn how these faculty members have been appropriated into the PR machine for the chemical-agro industry.”

“The agri-chemical industry has spent $100 million dollars in a massive public relations campaign,” Ruskin also has said. “The public has the right to know the dynamics.” The implication is that the scientists are working too closely with businesses who support genetically modified, or GM, foods.

As the Columbia Journalism Review has noted:

While open records requests are designed to protect press freedom, they also make it possible for people who oppose certain scientific viewpoints to exploit them. Ideologically driven record requests to public universities, coming from both the right and left, are often purposefully designed to disrupt research. This is nothing more than bullying, according to a new report from the Union of Concerned Scientists, which advocates for a measured approach to open records, with a more discrete definition of which requests serve the public good and which do not.

After her forced departure from Reuters in 2015, reporter Cary Gillam, who is known in mainstream media circles for her perceived biased reporting about agricultural biotechnology and her links to anti-biotechnology activist groups and to the Organic Consumers Association, was hired by USRTK as “research director.” She portrays herself as fighting for the cause of transparency in the food and agricultural industries. She has spent much of her time supporting the litigation efforts of the tort lawyers executing the glyphosate lawsuits. USRTK is paid by the tort lawyers to transcribe the proceedings, which are then used in their litigation efforts and by USRTK to publicize the litigation efforts.

USRTK has written a slew of attack blogs against organizations and people it believes are supportive of agricultural biotechnology—scurrilous insinuations that are frequently circulated on social media and occasionally picked up by mainstream journalists, some of whom are unaware of USRTK’s history, funding sources and ideological orientation.  Among its targets are numerous distinguished scientists, such as Nina Fedoroff, former president of the American Association for the Advancement of Science, University of California-Davis plant scientist Pamela Ronald, researchers at the Cornell Alliance for Science and University of Florida professor Kevin Folta, a central target of USRTK.

Folta posted an infographic analysis of a blog attack by USRTK co-founder Stacy Malkin  illustrating what he believes are the deceptive tactics used by the anti-GMO group. (Click here for enlarged version.) 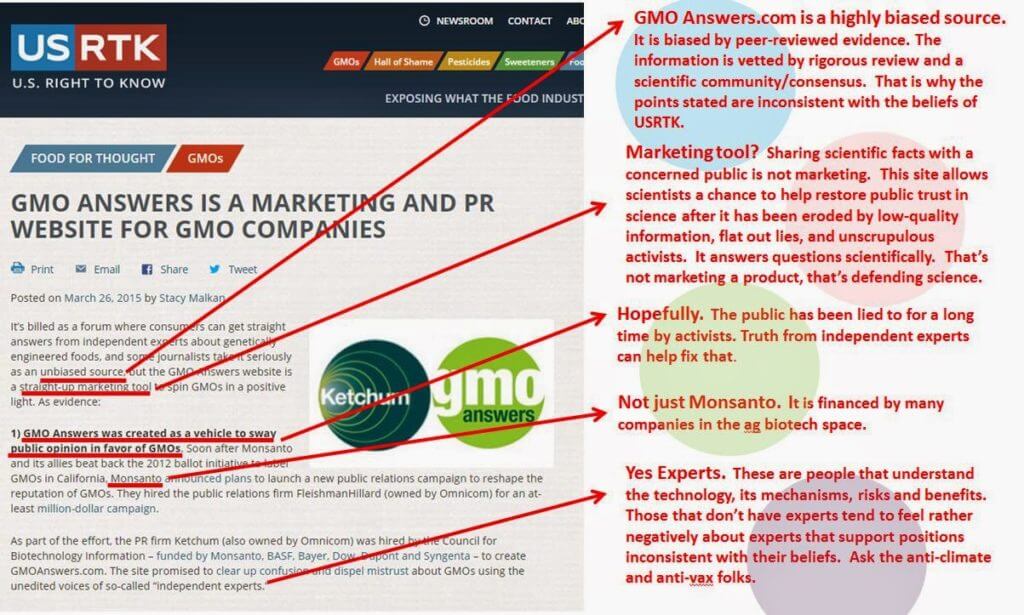 It’s also targeted journalists, including distinguished science reporters Mark Lynas, Jon Entine, Keith Kloor and Tamar Haspel [for the entire list, click here]. Haspel in particular was aggressive in a point by point response [Let’s talk about journalism ethics — mine and HuffPost’s] to an attack article that ran in the Huffington Post, written by Paul Thacker, a contract writer for USRTK with a controversial history. The many false and misleading representations made against Entine include allegations that the GLP works closely with Monsanto, which is belied by the internal Monsanto documents subpoenaed by the tort lawyers in the case and posted on the USRTK website, which no formal or informal cooperation between the GLP and Monsanto. USRTK and its writing team also falsely claims that the GLP was set up and funded by Monsanto and continues to get ‘dark money’ payments from the Bayer subsidiary—a statement the USRTK team knows is false, as lawyers in the Monsanto deposed company executives about this and subpoenaed documents [see page 19 of USRTK released document]. 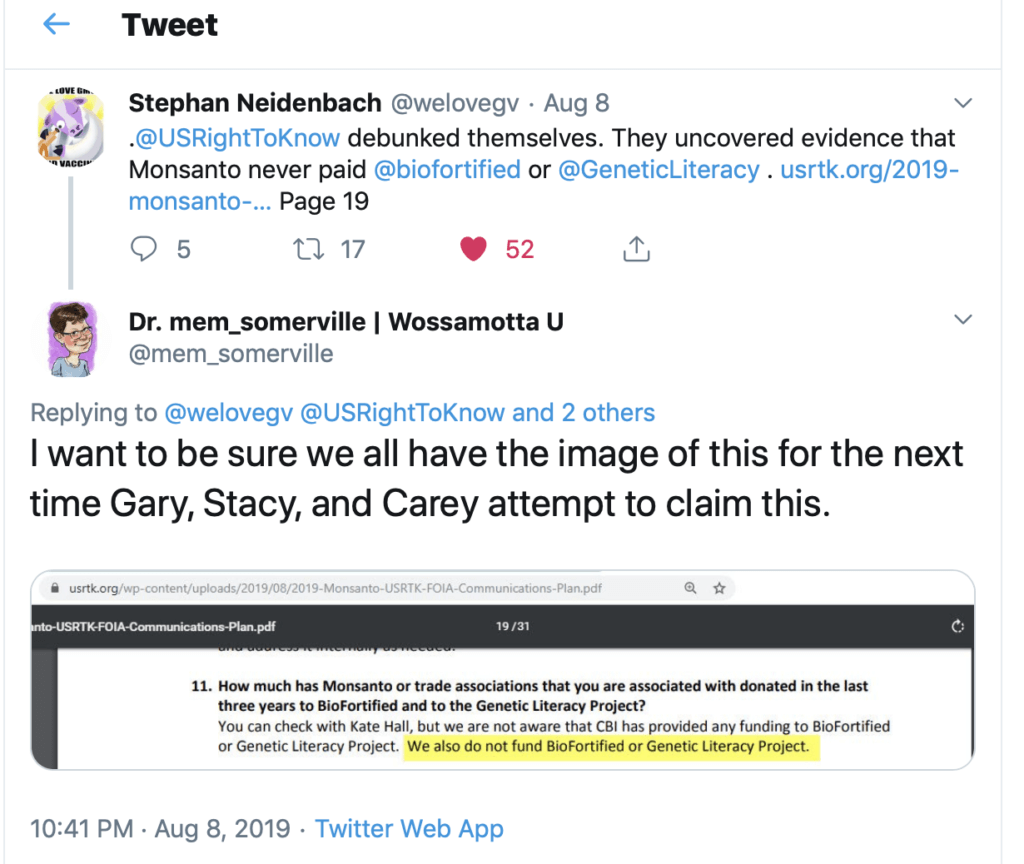 The organization is a 501c3 tax-exempt organization formed in 2014 (granted status October 2014); however, the website was first registered in 2012 (see below) while both Ruskin and Malkan were working for the Yes on Prop 37 ballot initiative campaign. The website became live in January 2015.

On January 20, 2015, it released a report on what it calls “Big Ag”, outlining what it says is the “seedy business” of Big Food, which it claims hides behind “slick PR campaign[s] on GMOs”.

The group is seeking “whistle blowers” who are “insiders” with the food industry, political, legislative or regulatory bodies to expose “hidden crimes or scandals” related to the food and agriculture industries.[4] The co-founders and board members have a history of litigation targeting corporations and collaboration with litigators suing corporations.

USKTR has published critical profiles of trade and advocacy groups which support conventional agriculture and non-organic farmers in their “Hall of Shame” – which includes attacks on the Grocery Manufacturers Association, U.S. Farmers and Ranchers Association, International Dairy Foods Association (IDFA), the American Beverage Association (ABA), the Center for Consumer Freedom and the Calorie Control Council.[5]

In addition to its FOIA campaign and writing critical public profiles on trade, professional and farming organizations, USRTK has published attacks on individual academics who publish content favorable on GMOs and conventional agriculture. It has published articles attacking Stanford University Hoover Institute fellow Henry Miller and filed numerous freedom of information related requests at state universities demanding the correspondence and related materials from academics who have published pro-plant biotechnology research.[6][7]

Penn State University emeritus professor Nina Fedoroff, also a target of USRTK, has likened the group to climate denialist advocates. “USRTK’s attack is reminiscent of ‘Climategate’, where the release of private emails did immense, unwarranted damage to the reputations of climate scientists. Now the vocal anti-GM lobby appears to be taking a page out of the Climategate playbook.”

Note that in 2014 OCA raised $558,000 via phone bank fundraising, for which it paid $418,000. As a result, the group’s “grassroots” donor contributions were only $0.25 per $1.00, and thus not a significant portion of its overall net income sources (less than 10%). The remainder came from a much smaller number of large, undisclosed corporate and foundation donors. These major donors included “Dr. Bronner’s Family Foundation”—which is funded by Bronner profits and donations from other organic industry trade partners.

USRTK’s activities formally began in 2012 or before; however, they have not disclosed any financial information for years prior to 2014, and claim on their IRS tax returns that they “planned” and “began some activities” but did not complete any projects in their first year, while building their website.[20]