This article or excerpt is included in the GLP’s daily curated selection of ideologically diverse news, opinion and analysis of biotechnology innovation.
[Adam] Haar Horowitz is one of a small but growing group of researchers who call themselves dream engineers and are exploring various methods to influence people’s thoughts at sleep onset and during sleep itself. Some tools, like Dormio, use aural stimuli, while others harness sights or smells, or employ more-complex technologies such as noninvasive brain stimulation. With a recent wave of studies demonstrating the promise of such approaches, neuroscientists and psychologists may be able to learn more not only about how and why dreams are generated, but about possible health and cognitive applications of dream control.
Follow the latest news and policy debates on agricultural biotech and biomedicine? Subscribe to our newsletter.
SIGN UP

Nudging the brain to incorporate specific content—a trick known as dream incubation—has proven to be surprisingly practical using computer and virtual reality games. Erin Wamsley, previously a postdoc with [Robert] Stickgold’s group who now runs a lab at Furman University in South Carolina, says that many researchers previously assumed dreams would be most influenced by more-intense experiences. “You can show someone horrible graphic images or very disturbing films with very high emotional content that participants would agree is disturbing or emotional,” says Wamsley. “But [that’s] not something that triggers people to dream directly about that experience, necessarily. On the other hand, we’ve had a lot of success causing participants to incorporate new learning experiences into their dreams.”

Related article:  Fear and anxiety may not be as separate as we have come to believe 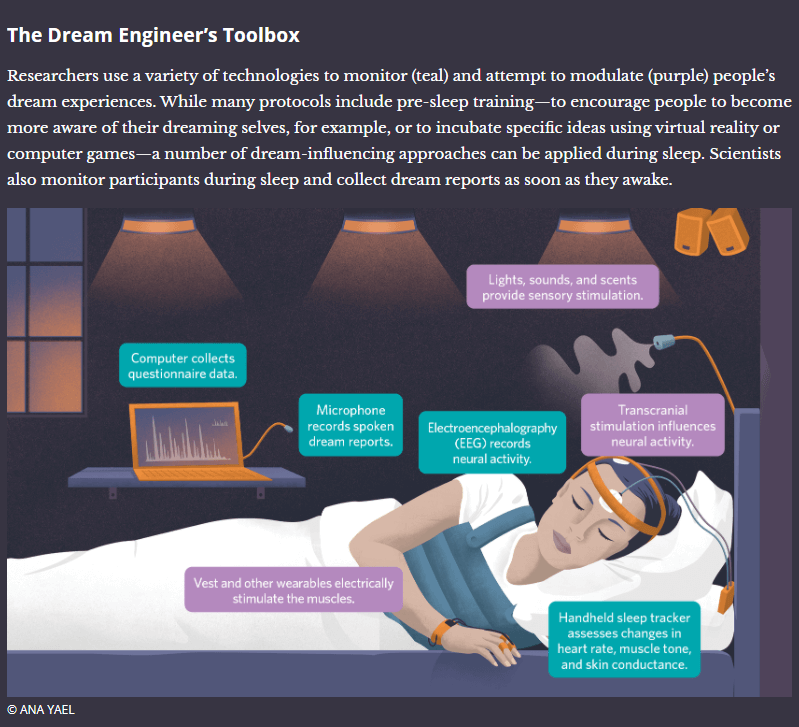