Pesticides and Food: It’s not a black or white issue — Part 3: How dangerous is glyphosate?

This article or excerpt is included in the GLP’s daily curated selection of ideologically diverse news, opinion and analysis of biotechnology innovation.
Although pesticide toxicity and biodegradability has decreased overall during the last few decades, many consumers are still worried about pesticides. They are especially concerned with specific pesticides that are portrayed as dangerous by the media.

Foremost among those is glyphosate.

3: How dangerous is glyphosate?

Before understanding the toxicity of glyphosate in the context of other pesticides and substances, it is important to clarify what toxicity means. Toxicity, the degree to which a substance can damage an organism, can be measured and compared in various ways. Acute toxicity refers to the immediate effects of exposure to a certain dose of a substance. Chronic toxicity refers to the effects of being exposed to a certain dose of a substance multiple times over the course of a certain period, for example, once a day for months or years. Acute toxicity is what we think of when someone gets poisoned by a substance. Chronic toxicity is usually what most consumers are worried about concerning pesticides: what are the effects of being exposed to small doses of pesticides, on our produce, for example, over a long period of time?

Now, back to glyphosate. Glyphosate makes up 25% of all pesticides used in corn in the U.S.

However, it only accounts for 0.01% of the chronic toxicity hazard of all pesticides used in corn.

This suggests that glyphosate is much less toxic than other common pesticides.

Read more about glyphosate in the GLP GMO FAQ: Is glyphosate (Roundup) dangerous?

It is helpful when analyzing toxicity to compare pesticide toxicity with other common substances. For example, caffeine is over ten times more acutely toxic than glyphosate. To die from poisoning, a 140-pound human would have to: 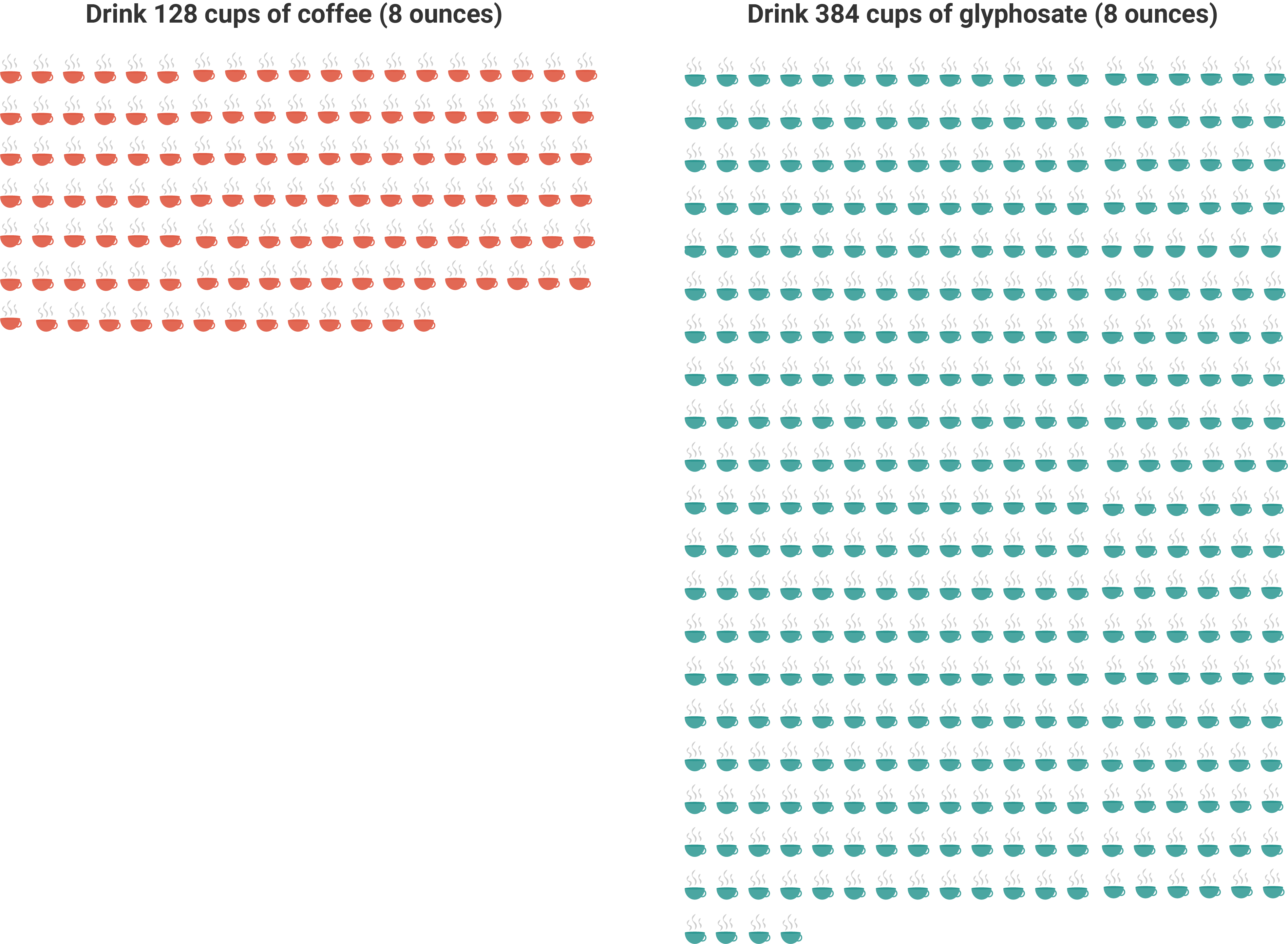 Compared to other pesticides and even things we find in common food and drink, like caffeine or vitamin D, glyphosate is low in toxicity.  One might wonder how it is that a substance specifically designated to kill things could be less toxic to humans than a vitamin that is necessary for human health? This lies in what is known as ‘mode of action’, that is, how the substance actually harms its target. Glyphosate is designed to kill plants and it does this in a very specific way — it inhibits photosynthesis, depriving plants of energy. Because humans don’t rely on photosynthesis for energy, glyphosate’s toxic properties as an herbicide are harmless to us. However, many are still suspicious and fearful of the possible consequences of regular glyphosate use. The use of pesticides is always about trade-offs. We need pesticides to produce enough crops to feed the world. Protecting and increasing crop yields through the use of safe pesticides is more sustainable and environmentally-friendly than letting land and resources go to waste because of unsubstantiated fears concerning chemicals.

Of course, the safety and health of humans, animals, and the environment are critically important. The use of specific pesticides always needs to be weighed against the alternative: which alternative pesticides will be used if one is banned? Are certain pesticides allowing for more sustainable farming practices that will be halted if other pesticides are used?

In the case of glyphosate, possible glyphosate bans in European countries may lead to less sustainable farming practices along with the possible use of more toxic herbicides. Specifically, glyphosate is an effective way to prepare fields for seeding by getting rid of weeds and plant cover. By using glyphosate, farmers had been able to reduce tillage substantially. Tilling the soil is a farming practice that also helps prepare fields for planting, but it increases erosion, reduces biodiversity of insects and animals in the soil and releases greenhouse gas into the atmosphere. Banning glyphosate could actually lead to the use of less sustainable farming practices. The balancing of pros and cons in pesticides and their interaction with farming practices is necessary regardless of whether pesticides are organic or synthetic. In the next post of this series, I will compare toxicity between common synthetic and organic pesticides, highlighting the complexity and variability in pesticides within both systems of farming.

This article was originally posted on the GLP January 29, 2019.

8 thoughts on “Pesticides and Food: It’s not a black or white issue — Part 3: How dangerous is glyphosate?”