This article or excerpt is included in the GLP’s daily curated selection of ideologically diverse news, opinion and analysis of biotechnology innovation. It is posted under Fair Use guidelines.

Here is a report from the Environmental Protection Agency of the Danish Ministry of the Environment: “Effects of glyphosate on the intestinal microbiota.”

You will understand: this is not good news for media outlets, for which the real good news — when it comes to their audience and their cash drawer — is bad news.

Here is the summary, broken down as usual:

Recently, concerns have been raised that glyphosate herbicide residues could interfere with homeostasis of the intestinal bacterial community and thus affect the health of humans or animals. The biochemical pathway for the synthesis of aromatic amino acids (shikimate pathway), which is specifically inhibited by glyphosate, is shared by plants and many bacterial species. Several in vitro studies have shown that various groups of gut bacteria can be affected differently by glyphosate.

Here we present the results of an animal exposure assay combining deep sequencing of the 16S rRNA gene from the bacterial community and metabolic profiling of aromatic amino acids and their downstream metabolites, based on liquid chromatography. and mass spectrometry (LC-MS).

We found that glyphosate as well as the commercial formulation Glyfonova®450 PLUS , administered at a dose up to fifty times the European Acceptable Daily Intake (ADI = 0.5 mg / kg body weight), had very significant effects. limited on the composition of the bacterial community in Sprague Dawley rats during a two-week exposure trial.

A strong correlation was observed between intestinal concentrations of glyphosate and intestinal pH, which may be partly explained by the observed reduction in acetic acid produced by intestinal bacteria.

The first assertion is false. We have already reported on studies, carried out in particular by the very militant Ramazzini Institute here (here for the media instrumentalization) and here. There was yet another, more recent one, which we tackled, from the angle of shameless instrumentalization, in “Glyphosate: and presto, gesticulation on the microbiota in the World, Planet of Mr. Stéphane Foucart obviously.”

The summary of the Danish study is not surprising: glyphosate inhibits the synthesis pathway of aromatic amino acids. If these are present in the middle, the bacteria that have this path do like the others that don’t: they use them in the middle … end of story.

The authors took their study up to fifty times the European Acceptable Daily Intake (up to 25 mg / kg BW / day). For our reference “shrimp” in toxicology (50 kg of body weight), this corresponds to 1.25 grams of glyphosate, or 0.17 liters of ready-to-use Roundup (old version), dosed at 7.2. g / L., or the equivalent of a standard glass of wine plus another three-quarters full.

The scams of the urine tests carried out by the BioCheck laboratory in Leipzig, whether for the scandalous Special Envoy of January 2019 or for the “involuntary glyphosate pissers”, are in this respect, in a way, a blessing: the results — which we know that they are false, and especially overestimated — are in the field of micrograms / liter of urine and point to a “contamination” (if it was real) of the order of 10 micrograms / person / day.

Let us remember in this regard, that the glyphosate possibly absorbed and evacuated by the stool (of the order of 70 to 80% of the absorbed dose), only passes through our body – knowing that, as confirmed by the Danish study (and others), it has no marked effect on the microbiota in real life.

In their scientific article, the authors note the presence of glyphosate and its metabolite, AMPA, in the intestinal samples of rats in the control group at doses of 1.0 ± 0.03 μg / g and 0.72 ± 0 , 12 μg / g. They explain it by the presence of residues in the standard food. This may be a weakness of the study. But, on the one hand, humans do not consume raw corn and soybeans, possibly GM (but could consume grains or legume seeds that have been desiccated by glyphosate), and, on the other hand, we remain at levels much lower than the ADI. 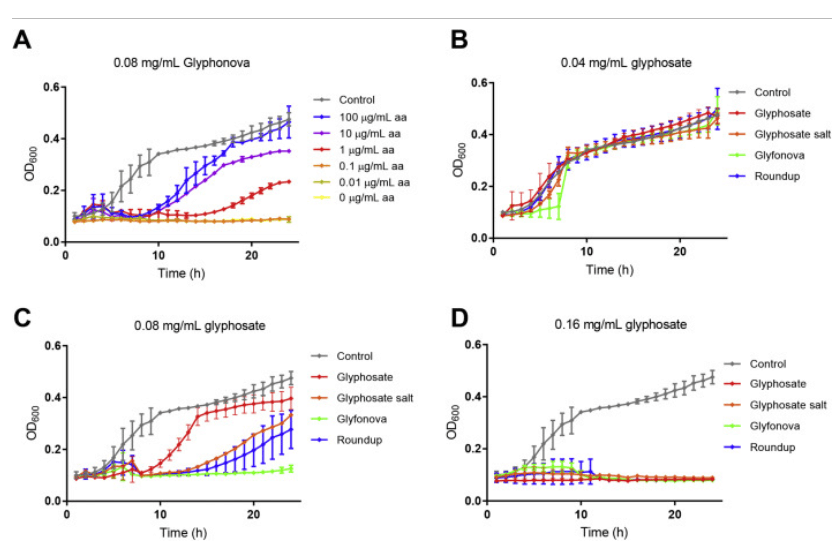 In addition, it would perhaps be useful to verify by a search in the literature if the modern tools (the “omics” in particular) and the models do not produce results leading to excessive interpretations of the effect of the molecules analyzed.

The authors of “Use of Shotgun Metagenomics and Metabolomics to Evaluate the Impact of Glyphosate or Roundup MON 52276 on the Gut Microbiota and Serum Metabolome of Sprague-Dawley Rats” modestly concluded:

Our study highlights the power of multi-omics approaches to investigate the toxic effects of pesticides. Multi-omics revealed that glyphosate and MON 52276 inhibited the shikimate pathway in the rat gut microbiome. Our findings could be used to develop biomarkers for epidemiological studies aimed at evaluating the effects of glyphosate herbicides on humans.

It had become: “Glyphosate can disrupt the microbiota at very low doses, according to an international study” from the pen of Mr. Stéphane Foucart in Le Monde Planète of February 2, 2021 (date on the web).

He will not write about the Danish study: “glyphosate has only very limited short-term effects on the gut microbiota.” Not in the editorial line…

This article was originally published in French and has been translated and edited for clarity.

A version of this article was originally posted at the Seppi blog in French and has been reposted here with permission.